This Hershey’s chocolate cake recipe with frosting is an old-fashioned classic American dessert that will never, ever disappoint. Simple and simply the best. 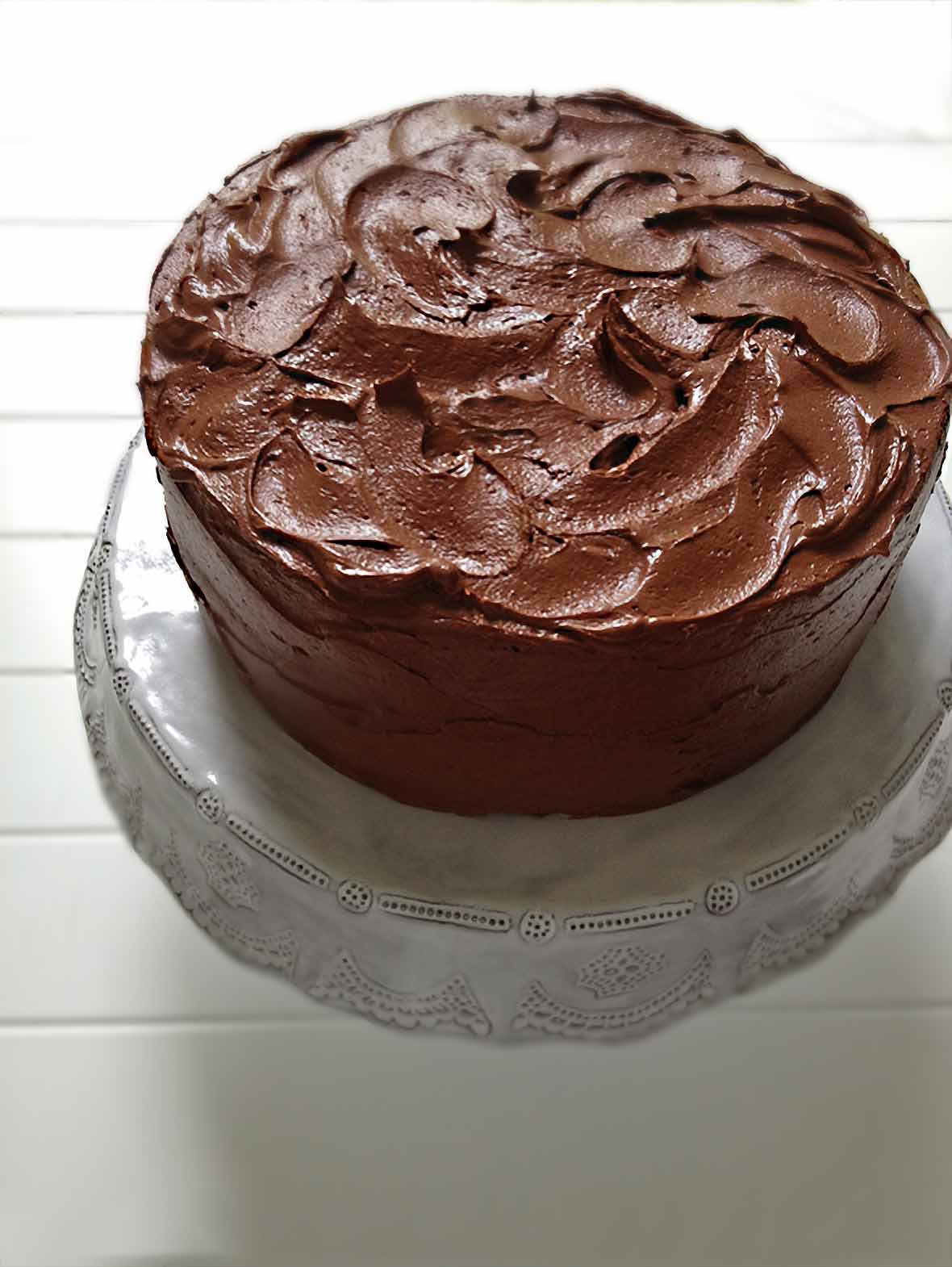 Adapted (barely) from the back of the Hershey's Cocoa tin

This Hershey’s chocolate cake needs no introduction, as it’s been around for almost a century. If you’ve never made it, you’re in for an old-fashioned treat. And if you’ve never made it with my wee spin on it, you’re in for an even greater treat. All I’ve done is toss in some instant espresso powder to the batter and the frosting. It amps up the flavor. And because I wanted a frosting that was more buttery and less cloyingly sweet, I use a greater proportion of butter to sugar, which makes the frosting soooo light–nothing at all like the cloying, gritty American buttercreams out there. That’s it. I don’t like to mess (too much) with perfection. Originally posted February 8, 2013.–David Leite

☞ READ DAVID’S ARTICLE: Forever and Completely, in which he explains that few things in life are truly forever and completely, save for his adoration for this chocolate cake and his partner of umpteen years. We consider your comments about this article, found beneath the recipe below, to be a testament to how intermingled food and love are for all of us.

Make the Hershey’s chocolate cake
Crank your oven to 350°F (180°C) and position a rack in the middle of the oven. Generously butter and flour two 9-inch round baking pans, tapping out any excess flour.
In a large bowl with a wooden spoon (surely you have one of those, yes?), stir together the granulated sugar, flour, cocoa, espresso powder, baking powder, baking soda, and salt. Make a well in the center.
Plop the eggs into the well and pour in the milk, oil, and vanilla. Using a handheld electric mixer (c’mon, surely you still have one of those, too?!), beat the ingredients on medium speed for 2 minutes.
Stir in the boiling water. The batter will appear alarmingly thin but fear not, that’s the way it should be. Pour the batter into the prepared pans, dividing it evenly.
Bake the cakes for 30 to 35 minutes, until a toothpick or cake tester inserted in the center of each cake comes out clean.
Cool the cakes in the pans on a wire rack for 10 minutes. Then invert the cakes onto the rack, remove the pans, turn the cakes right side up, and let them cool completely.
Make the Hershey’s chocolate frosting
In a bowl, stir together the butter, cocoa, and espresso powder.
Add some of the confectioners’ sugar and then add some of the milk to the butter mixture, beating with a handheld electric mixer (see how handy it can be?!) after each addition. Continue to add the rest of the sugar and milk, alternating them, and beat until you achieve a thick but spreadable consistency.
If a thinner frosting is desired, add more milk, a little at a time, until you’ve achieved your ideal texture. Stir in the vanilla.
Frost and serve the Hershey’s chocolate cake
Place a single cake layer on a platter or cake stand and spread a goodly amount of frosting on top. Place the second cake layer on the first and frost the sides and top, creating as few or as many lavish swoops and swirls with the frosting as desired.
Cut the chocolate cake into gargantuan wedges—none of those diminutive slivers for us, thank you very much—and serve.
Print Recipe

This really is the best chocolate cake! I’ve made lots of cakes, and this chocolate cake is absolutely the best. I tend to prefer using butter in baking; however, I make an exception with this cake, which calls for oil. Yes, the batter is thin, but that’s okay. And the frosting comes together beautifully, complements the cake, spreads easily, and isn’t overpowering. The first time I made this cake, I brought it to a small dinner gathering. After everyone had their cake, the room went silent, given that everyone was blissfully sated.

If I’d been wearing pearls, it would’ve been a Donna Reed moment, maybe June Cleaver. Imagine mixing all of the ingredients with a hand mixer before dinner, whipping up some frosting after dinner, and serving up the most delicious chocolate layer cake shortly thereafter...nothing complicated, nothing fancy, just a cake that screams perfection. Wooden spoons and hand mixers get perfect use here. Just make sure your bowls are deep enough so that the flour doesn’t go flying; same for the confectioners' sugar in the frosting. Too bad there are only two of us, and one of us watches our weight! No gargantuan pieces here, but small slivers with a cold glass of milk (skim is fine as a beverage but use whole for the cake!). I actually prefer the cake as cold as the milk—I tested that out this morning before my husband took the rest of the cake to work. He will be making new friends today. It’s a perfect cake for a celebration or just because you love chocolate. The espresso powder adds a nice undertone and cuts the chocolate just a bit.

This is a very good chocolate cake and very simple to make. The cake is moist and has a nice, rich chocolate flavor. Certainly the addition of espresso powder enhances and enriches the chocolate flavor. I do this anytime I am making a chocolate dessert, and it never fails to pay off. I suggest using cocoa powder instead of flour to dust the baking pans. This will eliminate the white powdery "crust" that will appear on a chocolate cake after it's baked. The frosting is a nice everyday type of frosting with a rich chocolate flavor, also a result of the addition of espresso powder. For a more special occasion, I'd make a nice Swiss meringue buttercream, a whipped ganache, or even a whipped cream frosting. Loved being able to use my electric hand mixer rather than dragging out the big 7-quart mixer!

"Pure bliss," "perfection," and "supreme" are a few words that come to mind after a bite of this cake. If a food could bring about international peace, then this must be the one. It was supremely easy to put together, the addition of the espresso powder deepened the chocolate flavors, the icing was easy to work with and wasn't overpowering. I would skip all 3 meals and just have cake for a day. With a nice glass of Prosecco, it's sublime.

Decadent chocolate cake. The ingredients are probably in your pantry and easy to whip up for some chocolate love. The batter is thin when done mixing but cooks up to a nice moist cake. Espresso powder adds a nice depth of flavor in the cake. We felt the frosting was a little overwhelming and would tone it down in the future.