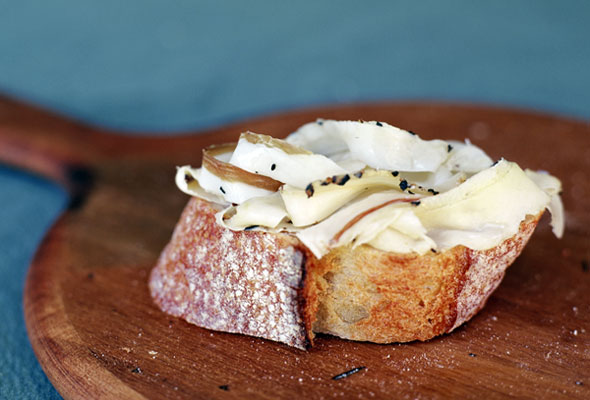 Does prudence ever truly prevail when, after landing on Italian soil, you promise yourself not to go hog wild eating?

So after a five-day run of gluttony in central Tuscany that culminated in a 15-course lunch, restraint should have, but didn’t, set in. Yet there we were, my husband, Robert, and I, on the autostrada during a dangerous cocktail of pelting rain and pea-soup fog, navigating dizzingly tight switchbacks along an Alpan mountain pass with visibility a scant few feet, in gluttonous pursuit of the legendary pig fat known as lardo di Colonnata.

Some people may recoil at the thought of lardo. Others may simply be weary of all things lard-related after its rise to trendiness these past many years. Yet few things are as sublime as thin ribbons of pearly white lardo piled high on top of warm crostini, its buttery texture and complex taste of herbs and spices borne on a subtle tide of brine. We first experienced lardo—essentially fatback—years ago. It was a northern Italian version, and I marveled over the soft notes of rosemary and sage that played on my tongue, the silkiness that melted into nothingness. At the time, we were told that every region in Italy has its own particular take on lardo, but that the one found in the Tuscan village of Colonnata was the most prized. Ever since then, we needed to understand why.

Now we were back and had a willing guide. Aurelio Cima, whose family owns Cima winery and restaurant not far from Colonnata, kindly offered to accompany us on our mission. Up and up we drove, along the sole access road to the medieval town. The only thing visible were hulking blocks of unpolished marble.

Colonnata—from the Latin for “column”—is wedged tightly into a high mountainside perch, among the famous quarries of Carrara in the Alpe Apuane. Marble has indelibly shaped the surrounding region’s history and culture and has been the primary business here since before Roman times. Its imprint can be seen and tasted everywhere, including the local wine varietals Vermentino and Massaretta, which are distinguished by their unique chalky, mineral quality. The rocky soil and mountainous terrain have never been much good for farming or pasturing animals. Yet pigs thrive on the abundant acorns and chestnuts in the surrounding forests. So the locals long ago learned to stretch their meager food supply by curing pig fat, rubbing it with salt and herbs and aging it in marble basins.  Generations of impoverished stonecutters owed their stamina to a simple meal consisting of thin slices of lardo between hunks of crusty peasant bread, an experience nonlocals such as Robert and I now seek out with great curiosity—and often at great expense.

Suddenly the fog lifted. Before us loomed mountains crosshatched with what appeared to be ski runs. A mile closer, I realized that what appeared to be snow was actually white marble scree, loose stones spilling down from the numerous quarries above. After a few more miles of dizzyingly tight switchbacks, Colonnata’s charming silhouette came into sight.

We arrived in the town’s gleaming piazza made of polished marble, a byproduct of the local trade and a testament to the prosperity that lardo has brought to the town.  It wasn’t until the 1970s, when the road was constructed connecting Colonnata to Carrara, that word of the local lardo began to spread. Today the town’s inhabitants seem accustomed to receiving an endless stream of tourists who come to taste its lardo, but it hasn’t given up its small-town soul. A stereotypical scene of informal cliques of men chatting and dogs misbehaving against the startingly beautiful backdrop greeted us. Not much English is spoken here, and Italians from elsewhere are sometimes stumped by the local dialect.

Aurelio led us up a little stone alleyway that meandered from house to house, calling out to the occupants. An aproned signora with a broad smile emerged and ushered us into a cellar. Arranged casually about the floor were eight chiseled basins, called concas, of varying sizes. She slid aside one of the heavy marble lids, releasing a heady aroma of garlic, herbs, and brine. It was the sort of deeply gratifying smell that causes instant hunger.

But to properly appreciate lardo di Colonnata’s timeless essence, one must first understand its production, past and present.

Starting in the fall, explained the signora, the concas are cleansed in preparation for lardo production, which continues through January. The interior of each conca is treated with vinegar and then rubbed with garlic. Sea salt and a unique mixture of herbs and spices is then spread thickly across the bottom of the conca. Each of Colonnata’s 14 or so lardo-producing families uses their own proprietary blend of ingredients, traditionally including rosemary, peppercorns, and garlic along with smaller amounts of anise seed, thyme, oregano, sage, nutmeg, and clove, depending on personal preference. Slabs of fatback, cut at least one and a quarter inches thick into rectangular blocks weighing between one and 11 pounds, are then placed atop the curing mixture and covered by more sea salt and spice in alternating layers until the conca is nearly filled. After a week’s cure, a strong brine is poured over the fatback and the marble covers are slid into place. From this point on, the concas and their contents are left undisturbed for a minimum of six months, save for an occasional peek by the lardo maker.

This centuries-old process was sanctioned only after a hard-won battle with European Union (EU) health officials a little more than a decade ago. Horrified to discover what they perceived as primitive, unsanitary conditions in Colonnata’s dirt-floored cellars, EU inspectors demanded local lardo makers adopt modern techniques—such as preservatives, plastic tubs, and the like—or halt production. The EU’s crass actions—though unsupported by any scientific study, speculation regarding potential bacteriologocial contamination even brought about middle-of-the-night raids on a number of lardariums—sparked the rallying cry for Italy’s nascent Slow Food movement and incited regional governments to take proactive measures to protect local artisanal traditions. Later, presented with unequivocal proof that Colonnata’s methods resulted in a product free of any harmful bacteria, EU officials relented, requiring lardo makers only to tile their storage cellars and install washrooms.

Whereas years ago lardo di Colonnata was produced from only local pigs that fed on forest nuts, the signora continued, now, in order to meet demand, producers supplement their own livestock with pigs from the prosciutto consortiums of the towns of Parma and San Daniele.

It was at last time to taste the lardo. We accompanied the signora into the small store a short walk from her family’s cellar. If ever air was edible, it was here. She expertly cut thin slivers from a pristine white block of lardo and  draped them atop slices of peasant bread. It had the same beautiful, silken texture I recalled, but it was the intricate, nuanced flavor that made it clear why Colonnata’s version was so acclaimed. Robert bought three slabs and, while they were being wrapped, I chatted—or, more accurately, gestured—with the villagers gathered in the store. I’ll never forget one particularly feisty woman who, youthful looking despite her 90-some years, claimed she owed her longevity to years of drinking wine, smoking cigarettes, and consuming lardo.

This made me wonder. One could argue that lardo could—and arguably should—be enjoyed regularly and in moderation without guilt, despite the fact that its name may seem a perfect moniker for a person of girth. Americans tend to assume that fat—pig fat, especially—represents a formidable health danger, not unlike the EU inspectors’ hasty judgment about the microbial menace of lardo. Yet recent research refutes such grim notions. Lardo has less saturated fat and cholesterol than butter, and fewer potentially damning repercussions for one’s health than artificially produced fats. Perhaps, as Italians seem to have known all along, pleasurable things are the best preservatives.

Where to Buy Lardo di Colonnata

© 2010 Amy Cortese. All rights reserved. All materials used with permission.

Amy Cortese writes about food, wine, travel and business. Her work has appeared in New York Times, Business Week, New York, Mother Jones, and Wired among others.She lives, and over eats, in Brooklyn.