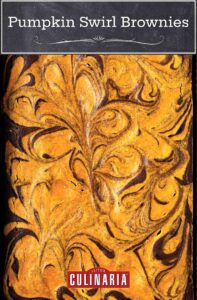 These pumpkin swirl brownies are made with cream cheese and taste as if pumpkin spice cheesecake swirl collided with chocolate fudge brownies.

These pumpkin swirl brownies are outrageously rich thanks to pumpkin spice cheesecake swirled through chewy chocolate fudge brownies. They taste just as autumnal as they look, although honestly, we wouldn’t think twice about making them any day of the year.–Eliza Cross

Can I use frozen pumpkin instead of pumpkin purée in pumpkin swirl brownies?

No, we would advise against it. You’re going to find that frozen pumpkin is just too wet and you won’t get that lovely definition in your swirls. If you’re determined to use frozen pumpkin, then you’ll have to drain it really, really well. Like, in a sieve lined with cheesecloth overnight.

How do I make my pumpkin swirl brownies easier to get out of the pan?

Baked goods can be tricky, especially in the corners. Sometimes just greasing the pan is enough but if you want to ensure that you’ll be able to get it all out in one piece, you can go a step further. Grease the pan, line it with parchment paper, and grease that, too. Leave an overhang of parchment over the side to act as handles and you’ll be able to lift your swirled sweets right out. 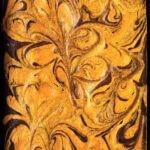 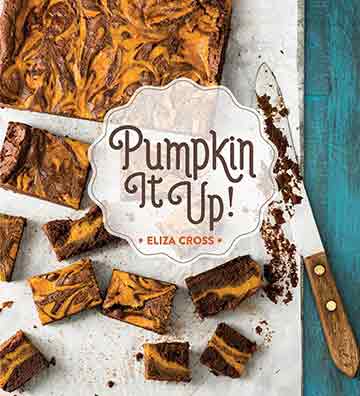 For the pumpkin cheesecake swirl

For the chocolate brownie batter

These pumpkin swirl brownies were richer than expected and oh-so-good!

These do take a little longer to make than regular brownies, but in my opinion, it’s worth it. I love the swirling of the pumpkin in the brownies, though take care to not do it too much and mix the cheesecake completely into the brownie batter. (If you’re really worried about it, I would reserve a spoonful or two of brownie batter and put it on top to make the swirling a little easier.)

I was also hesitant about adding the ginger, but it turned out to be just fine and definitely not overpowering. I baked mine for an hour and five minutes and the ones on the outside were good but the middle ones were still a little bit underbaked, which makes them a little denser and richer.

This pumpkin swirl brownies recipe produced an excellent brownie that was also pretty. The pumpkin spice taste complemented the chocolate instead of overwhelming it. An easy recipe that makes an attractive dish to take to work or a party.

For me, the recipe made 24 brownies, but I tend to cut my brownies in a more generous 1 1/2 inches by 3 inches. None of my volunteer testers complained.

Pumpkin with fudgy chocolate is a fantastic combination. Although my pumpkin swirl brownies didn’t have the swirled effect, the flavor more than made up for the lack of a fancy finish. (I used puréed pumpkin that was previously frozen and I think this is what made my pumpkin cheesecake layer watery. It wouldn’t swirl because of how liquidy it was, but the brownies came out fine!) Although mine lacked the pretty swirl, the taste, and texture were great.

I loved eating these straight from the fridge with a cold glass of milk. Make sure not to overbake them or the edges will dry out. I would start checking them after 45 to 50 minutes. I would say more like 24 servings, but I like big brownies!

Initially, we thought these pumpkin swirl brownies might be just okay, but they’re actually surprisingly good. The pumpkin cheesecake swirl balances the chocolate brownie quite well.

In some places where the globs were larger, the cheesecake mixture didn’t swirl well into the brownie mixture, but this is a small issue. I’d make a lot more little blobs. My yield was 30 brownies but you could easily cut the pieces smaller or larger.