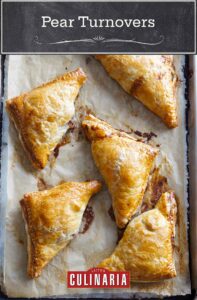 Pear turnovers are a serve-and-grab, handheld dessert that tastes like autumn. Sweetened with dates and no sugar, all the spices take center stage.

The pear compote is gently sweetened with dates and spices, and they infuse the pear turnovers with their heady scent; the puff bakes flaky and buttery, and you’ll not only impress your family and friends but also yourself at how divine these pastries are.–Joanne Chang

CAN I FREEZE TURNOVERS?

You sure can. You can do this in 2 ways. Freeze them before baking and store them for up to 2 weeks. They can be baked from frozen but keep in mind that they’ll take a few more minutes (5 to 8) in the oven. You can also freeze turnovers after baking. They’ll also keep for up to 3 months. Let them thaw, wrap in foil, and give them uo to 8 minutes in the oven to warm. 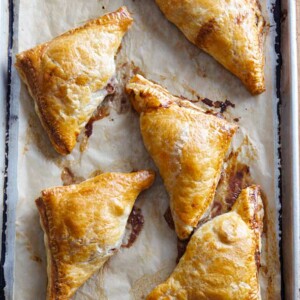 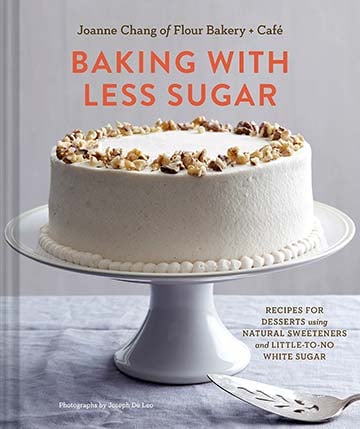 These are turnovers for grown-ups. The filling is very subtly sweet—the dates are the sole sweetener here—and the allspice and ginger really come through. The amount of filling for each turnover is perfect, too, as you’ll get some in each bite. You can skip mashing the dates after soaking since they’ll turn mushy on their own as you cook them with the pears. Do taste the filling about halfway into cooking it. If you want it sweeter, I think it’s perfectly fine to add a little brown sugar or chop up a few more dates and throw them in (no need to soak).

When handling the puff pastry, RELAX AND CUT YOURSELF SOME SLACK. Be very gentle when folding the dough over the filling, as the puff pastry is quite flimsy at this point. (I used a bench scraper to lift the corner and guide it over the filling and also to transfer the folded turnovers to the baking sheet.) I initially baked 4 turnovers for 50 minutes, which was long enough, and I froze the rest. The frozen turnovers were baked in 1 hour a few days later. I finished the leftover filling by adding it to plain yogurt—a good mid-morning snack. The directions to refresh leftover baked turnovers the next day worked well.

With a bumper crop of pears from my dad’s garden, I was excited to try making these pear turnovers. I haven’t had turnovers since I was a kid. Well, these lovely pastries are much more sophisticated than the turnovers from my childhood. I really like that they don’t contain any refined sugar, as the sweetness comes from the dates and pears themselves. The natural sweetness partnered quite well with the buttery crunch of the puff pastry. Oh, and the best part? Eating them while still slightly warm and adding a dollop of vanilla ice cream on top! A lovely dessert.

I used a variety of pears rather than all Bosc, as that’s what I had available. Making the compote was very straightforward, and I found that I didn’t need to add any water. Because my pears were on the small side, I used 8 pears and 8 dates, which yielded more than enough compote for 10 turnovers.

I used store-bought puff pastry that came in a box containing 2 rolled-out squares of dough. The recipe called for about 1 pound, which equaled 2 boxes. Just a note regarding the dough, make sure your dough is chilled. I made the mistake of allowing the dough to reach room temperature, and handling it was very challenging. I ventured on, and instead of triangles, the dough morphed into free-form parcels. Not exactly the desired result, but it worked all the same. I did try chilling some of the dough, and that made all the difference. I was then able to form triangles with ease.