These Portuguese clams and sausage are slowly cooked with chouriço, onions, garlic, tomatoes, and spices in a cataplana, the Portuguese precursor to the wok.

A cataplana, a fixture in the Algarve, is kind of a spiritual cousin to the pressure cooker. Shaped like a giant clam, the hinged pan clamps down during cooking, locking in the juices of its contents. When carried to the table and popped open, it fills the room with steam redolent of the sea. If you’re bereft of a cataplana, a Dutch oven with a tight-fitting lid works perfectly, if less attractively.

I first had this meaty cataplana 12 years ago in Bridgewater, Connecticut, of all places, at the home of my friends Manny Almeida and Kevin Bagley. Manny, who’s from the same Azorean island as my family, just whipped it up one summer evening. I’ve since had it many times in Portugal, most memorably at an ocean-side joint in the town of Sagres, just east of the vertiginous promontory where Henry the Navigator supposedly built a school and shipyard for his sailors.–David Leite 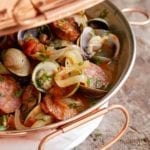 Cook your clams in style

This Traditional Copper Cataplana is approximately 9 inches wide and is traditionally used to make Portuguese seafood dishes, popular on the country’s Algarve region. The most famous dish made in a cataplana is amêijoas na cataplana (clams in cataplana). The cataplana is traditionally made of copper and shaped like two clamshells hinged at one end and able to be sealed using a clamp on either side of the assembly. Made in Portugal.