This clam shack-style fried clams recipe tells you exactly how to make fried clams. Whole belly ones, natch, which are the best. And it’s so ridiculously easy.

I’ve made no secret of my absolute addiction to fried clams—especially clam shack-style fried clams with big, luscious, profane whole bellies. I remember going as a kid to Macray’s, a local clam shack in Westport, MA., several Sundays during the summer. There my parents, grandparents, godparents, cousins, and I dove into pints of deep-fried oceanic goodness. My only regret as I tapped the last bits of crumbs from the greasy red-striped box into my mouth was that we couldn’t make them at home. That little snag meant this treat would be relegated to the hot, steamy days of a New England summer.

That is until I learned to shuck steamer clams at home. It’s a simple process of dipping the clams in boiling water for several seconds, which helps pop the shells but doesn’t cook the meat. The clams are then dumped into cold water. Then it’s a matter of taking a knife and releasing the clam from its shell.

When I made this recipe, adapted from the great Jasper White, I was tempted to doctor up the coating mix with all kinds of herbs and spices. (Yes, for a moment I thought of myself as the Colonel  Sanders of Seafood.) “The secret to fried clams,” says Chickie Aggelakis, owner of The Clam Box in Ipswich, Mass., “is the flavor of the clams.” The coating and its crunch protect the tender belly meat. Mucking it up with spices—which is hard to resist—should be avoided at all costs.–David Leite

Can you use canned clams to make fried clams?

Alas, no. Canned clams are fully cooked and therefore would fall apart. Plus, they’re tiny. You want large steamers for fried clams.

Can you use littlenecks or cherrystones to make fried clams?

Again, no. Littlenecks and cherrystones are different types of clams. They’re chewier and don’t have the same texture and taste as steamers

What other names do steamer clams go by?

What is corn flour and where do I find it?

Corn flour is essentially very finely milled cornmeal made from the entire kernel of corn—the germ, the bran, and the endosperm. Corn meal—whether coarsely ground, medium grind, or finely ground—is not an acceptable substitute due to the textural difference. However, masa harina, which you can find in the Latin section of most supermarkets, is a perfectly fine swap.

A caution to our friends the Brits and Aussies and Canadians. We understand that in your corners of the world, “corn flour,” or rather “cornflour,” is synonymous with “cornstarch,” but that’s not what we’re talking about here. Cornstarch is ground from only the endosperm of the corn and makes a lousy coating for fried clams. Trust us.

☞ How to remove clams from their shells 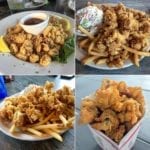 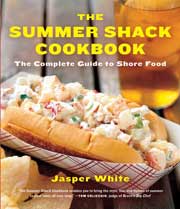