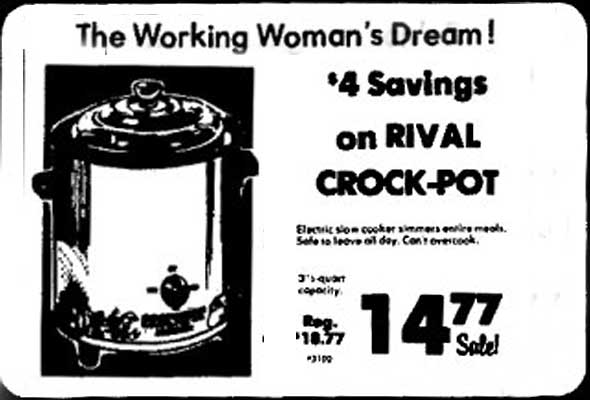 I want to say up front that I’m a longtime hater of slow cookers. Ever since I was a kid in the ’70s, all I ever saw come out of Crock-Pots was brown slop. It all looked alike, it all tasted alike. A decade or so later, after I began to cook, I still looked upon slow cookers as cheating. I saw them as symbols of middle-class consumerism pandering to an increasingly lazy society. (Damn, I should have brought a soapbox.)

With the original Crock-Pot, you were really cooking about as much as Lance Armstrong was really winning. Throwing all the ingredients into a pot, walking away for 12 hours, and expecting genius to spill out was ridiculous. Where was the impeccably timed stirring? The gentle nudging of meat? The careful spooning of broth over vegetables? If I wasn’t cooking as my grandmother and mother did, then I was committing fraud in the first degree. And I wasn’t about to risk a criminal record.

Not surprisingly, this hard-assed point of view was reinforced at my weekly avocational culinary classes taught by equally hard-assed Chef Hans. In his Schwarzenegger-ish accent, he pounded into my brain the proper way to mince garlic cloves, which was with the very tip of my paring knife so as to spare the tips of my fingers from the same fate. That I should always double-fry potatoes—at two different temperatures–for the perfect pommes frites. That I must make stock only by dumping a wheelbarrow’s worth of chicken bones into a pot and then fastidiously skimming scum while sleeping on the counter as I waited for the water and bones to reduce to a jiggly puddle of gelatinous godliness. I clutched to that last belief as recently as this past January when, in a testament to ancient cooking methods, I spent a day making quart upon quart of duck stock for my annual cassoulet party.

Yet after being incessantly peppered by requests for slow cooker recipes from our readers as well as our militia of trusty recipe testers, I caved. And so Renee and I decided to try to reverse engineer a dozen or so recipes from the site to see if they could work in a slow cooker. If a dish—say, my Momma’s incredible, and incredibly popular, Portuguese beans—tasted as good out of the old Crock-Pot as it did out of the Dutch oven, then I’d forever consider the slow cooker a valid cooking tool and I’d make room for it in my already overcrowded arsenal of kitchen workhorses. To me, that’s the true test.

Long story short, we triumphed. So impressed was I with our testers’ results that I ordered my brand spanking new slow cooker from CHEFS Catalog, left it out on the counter—extremely valuable real estate in our house—and seldom has it been empty since.

Of all the recipes we tweaked for the slow cooker, the one that impressed me the most was this slow cooker chicken stock. Now, I know from stock. But this “recipe” seemed so ridiculously simple, so 180° from actual cooking, I doubted it could touch the real thing. (Sorry, Renee, but I did.) Still, I dutifully dumped in the carcasses of two rotisserie chickens, some vegetables, and aromatics, and, channeling my best Ron Popeil, said to myself, Set it and forget it!

And that’s what I did. I had dinner, watched “The New Normal,” and went to bed. And I slept so soundly, you’d never know I have sleep apnea. Never before have I left food cooking on the stove or in the oven unattended. Hell, I don’t even take naps or run to the store for milk when a pot is burbling. But I took Renee’s advice to let go—and Momma Leite’s advice to let God—and 12 hours later I was graced with a stock that was so rich, so flavorful, so wafting with gallinaceous glory that even Devil Cat was sitting at attention.

Once the stock had cooled, I poured it into large resealable plastic bags and placed them in the fridge. When I reached in for some lunch a few hours later, I checked on it. And it was every bit as gelatinous and jellylike as my pain-in-the-ass-eight-hours-of-attentive-skimming-and-scumming-of-25-pounds-worth-of-duck-bones stock. Damn.

Crock-Pot, can you ever forgive me?