These Portuguese peixinhos da horta (or fish of the garden if translated literally to English) are actually tempura green beans. The veggies are dipped in a mixture of flour and club soda and then deep-fried and served with garlic mayonnaise.

These crispy, crunchy, ethereally light, and delicious green beans are a conversation-stopping appetizer or tapas. The secret to the ethereally airy coating is using extremely cold soda or sparkling water. Dunked in garlic mayo or tartar sauce, the beans will be gone as fast as you can make them, so pay attention in order to be sure you snatch a few for yourself.–Angie Zoobkoff 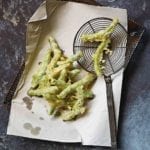 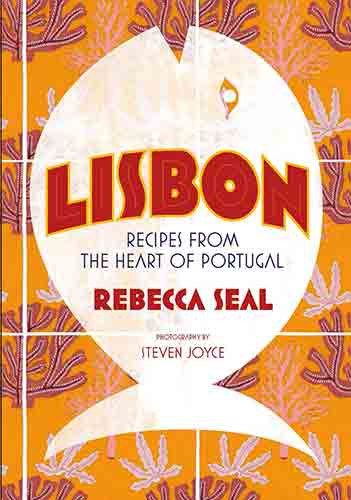 Ahhh, “peixinhos da horta,” a Portuguese classic. This recipe for tempura green beans does not disappoint. I have had my fair share of these battered green beans in my lifetime and I have to say, this recipe is by far the best tasting and lightest version that I have ever made or tasted. The batter is super light and crispy, and the beans al dente. So good!

We did not use any dip for the beans as we found them delicious on their own when hot. Even more delicious with some cold light beer.

I used round French green beans. I only filled my 9-inch Creuset pot with 1 1/2 inches of oil and it was more than enough. I used 2/3 cup sparkling water, which I placed in the freezer for a bit to make sure it was ice-cold.

These peixinhos da horta, are crispy, tender, crunchy, and just enough salt. They’re super easy to whip up and taste great! The recipe could serve 4 as an appetizer but these are addictive.

The batter was more the consistency of waffle or crepe batter than heavy cream and in retrospect could have been a touch thicker for a nicer coating and less leftover batter at the end. I used mayo not tartar sauce.

This took over 10 batches to cook all of the beans. By the time I finished, the first few batches were cool. Next time I think I would preheat the oven to low to keep the finished batches in while I continued to cook beans.

There really wasn’t time to prep the mayo sauce while the beans were cooking. I would do that in the first step next time and allow it to rest in the refrigerator until ready. I can see where freshly made mayo would really sing here! All in all, these green beans were delicious on their own. They weren’t too salty or heavy and they had a lovely and light crunch. The beans were perfectly cooked at just tender and they weren’t soft or limp. These were very easy to make and definitely don’t last long!

The promise of a light tempura and green beans made this fry-averse cook give this a try. I liked not only the simplicity of the recipe but also the idea of keeping the green beans perfectly crisp, which is what makes these tempting when I spot them on menus. No doughiness. These peixinhos da horta met all those hopes and can been even simpler if you have a wok on hand, with the wide sides to capture the splatter, which means you can easily do this in a shallower depth of oil.

I washed my green beans and trimmed them ahead of time so that they would be dry before dipping them in the batter.

My batter needed the full 3/4 cup of sparkling water plus a tablespoon to reach the right creaminess. I staged my beans, batter, a towel-lined dish, and my spider (a wire basket for removing the finished beans). When the oil was the perfect temp, the beans would sizzle on the surface immediately and a crisp and light coating was done in under 6 seconds.

On the third batch, the temp dropped off a little and I noticed my beans sunk initially and took longer, so I adjusted the heat and once I was back up, it went as expected.

I served this with the garlic mayonnaise as well as with some horseradish creme, and although you could share this as an appetizer among 4 people, it also easily makes a tapas meal for 2.

I had some batter left over so I prepared some cauliflower florets using the same technique.

For those who need to make this gluten-free, I think this would work fine with rice flour.