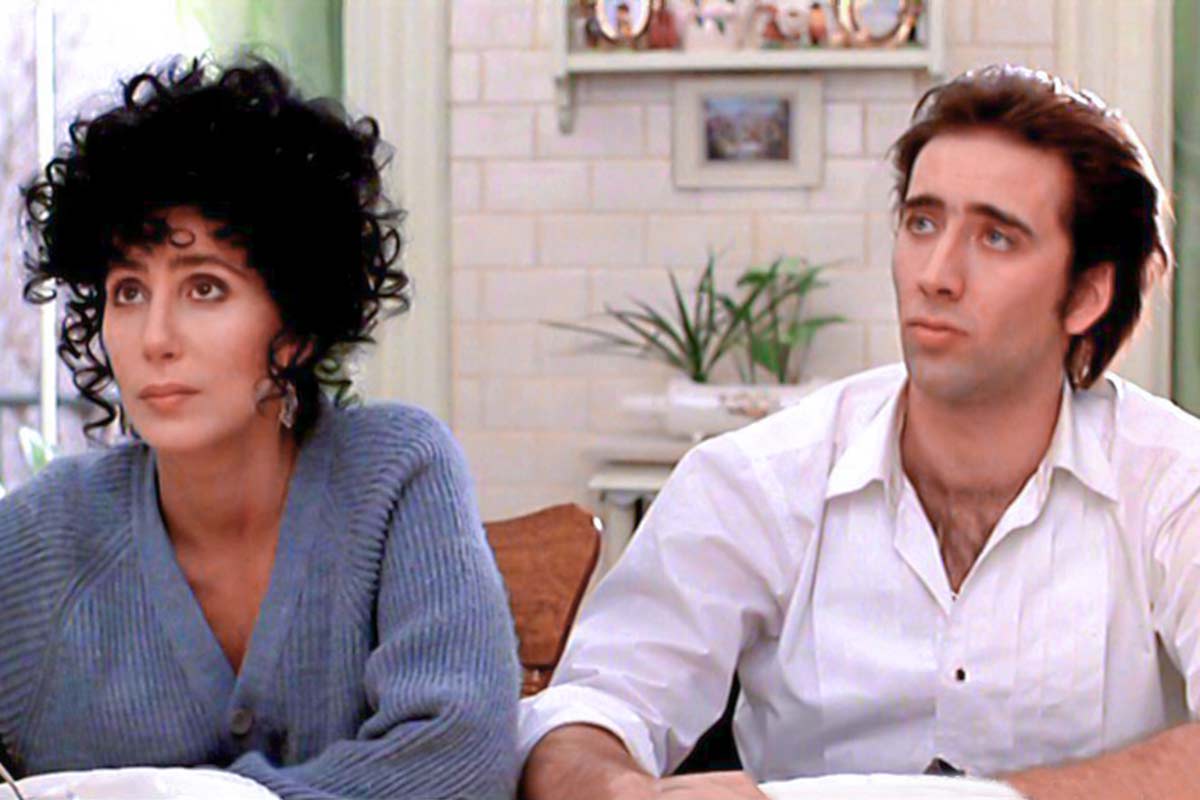 ‘Fess up. We know you have a secret, romantic imaginary life based on your fave rom-coms. And if you’re reading this, chances are it’s a movie about love as well as cooking. We get it. Here’s our list of pulse-quickening appetite builders to add to your Netlix queue and get you in the mood…for brownies, natch.

This entire movie is packed with crave-inducing food scenes. Though it’s not exactly what we think of as a typical rom-com, it’s comedic, certainly. And it will give you some romantic vibes. But overall, the premise is about flawed people and flawed love underscored with a dazzling array of Italian food. There’s no meet-cute. Rather, it’s a sweaty Nic Cage rant that will leave you longing for Cher to serve you a rare steak and list everything that’s wrong with you.

We all know the appeal of someone who loves to cook…and when that someone wants to cook just for you? Off-the-charts sexy. In this rom-com, Jon Favreau convincingly plays exactly that. His character is based on chef Roy Choi, who makes this pasta aglio e olio (which he calls “transcendence through a handful of humble ingredients”) every Sunday night at home. We love this scene and how, even without any dialogue, it still makes us weak in the knees. ScarJo couldn’t resist, either.

A hard-edged chef has to take on her niece and a handsome but distracting sous-chef, getting in the way in her kitchen as well as in her life. If having someone cook for you is sexy, cooking with someone you’re falling in love with might be more than we can handle. First released in German and remade in English with Catherine Zeta-Jones and Aaron Eckhart (and subsequently in Spanish as Chef’s Special), the storyline remains the same with no film deviating significanly from another. Mostly Martha received the best reviews, so if you can find it, start with that.

On the surface, it’s a Danish drama featuring a seven-course feast that changes the lives of a disappearing order of nuns and their mysterious cook. Of course, it’s more than that. It’s always more than that. It’s turtle soup and Champagne and quail and truffles and figs and cognac. Old loves are rekindled and everyone rediscovers earthly pleasures that don’t always equate sensual with sexual. Food is still a way to connect with others, broadly speaking, as Babette’s divine dinner breaks down barriers related to both spirituality and intimacy.

Taken from the stunningly beautiful magical-realism novel by Laura Esquivel, the film is a study in how closely food and emotions are linked. Every meal the heroine, Tita, makes represents an emotion and literally affects the people devouring it. Sorrow, lust, love, and jealousy make appearances as Tita struggles with losing her soulmate to her sister. (In case you’re curious, “like water for chocolate” is a common Spanish expression that literally means boiling water for hot chocolate though colloquially it’s used to mean boiling over with emotion.)

Juliette Binoche, Judi Dench, Alfred Molina, and Johnny Depp drizzled in an irresistible excess of exquisite chocolate. What could be sexier than that? Chocolat draws a parallel to Like Water for Chocolate (see above) in the confections made by Binoche’s character become imbued with magic and start to stoke love, lust, and feelings of bonheur throughout the small town in France.

Let’s face it. Rom-coms are still mostly a white, heterosexual mainstay. Breaking Fast, however, is a delightful and heart-racing romp that focuses on a gay Muslim man and the trials of dating during Ramadan. Every night during the holy month, Kal offers to break fast with Mo, and during those meals, they develop a connection. They’re an utterly charming couple, even before they’re a couple. They play off each other while devouring plates of the Iftar (fast-breaking) feast. Mo’s stubbornness and reluctance is charming while Kal pursues him with the sweet tenacity of a truffle hound.

This intercultural delight of a movie might be foreign to you, but it shouldn’t be. An Indian family opens a restaurant in the south of France opposite a Michelin-starred eatery owned by the cold-as-sorbet Madame Mallory, played by the divine Helen Mirren. It all comes down to a bespoke omelet in this enchanting and gentle love story filled with scenes of culinary exquisiteness, including a sweetly romantic scene covering the mother sauces.

A Chinese drama about a widowed father living with his three unmarried daughters. Every Sunday, the retired Mr. Chu makes a glorious banquet for his daughters as they transition from daughters to wives, encompassing old traditions in new ways. There’s romance in the film, but there’s also familial and cultural love. The true beauty of it is the adoration with which the director, Ang Lee, showcases the preparation of Taiwanese cooking. Valentine’s Day or not, it’s nothing short of breathtaking.

A ramen love story. It’s also a Japanese comedy, sure. But so much more than that, Tampopo is a movie dedicated to all things edible and satiating. Part western, part comedy, the whole thing is drenched in an eroticized adoration of food that still makes us blush. The egg scene has proven to be too much for some viewers. If that’s you, perhaps you’ll prefer the oyster scene. But all told, it’s the ramen slurping that drives us wild.

And for your consideration…

And lest you run out of romance too quickly, here are some of the other romantic comedies also loved by our very own recipe testers:

Tony Shaloub and Alison Janney in the kitchen? There’s no way you can watch this and not think her laughter is real. Adorable. And Stanley Tucci is a dream.

Sitting around the dinner table where Zoey concludes older women are the most [expletive] demographic ever to exist.

The mom wanted to go to culinary school, but started a family. Really sweet.

Bonus of Stanley Tucci—he is so lovely as Paul Child.

A favorite scene includes when Ian’s mom brings a Bundt cake to Toula’s parents’ house and Maria (Toula’s mom) didn’t understand why the cake had a hole in the middle and put a plant to cover the hole!

The refrigerator scene if you’re less into romance and more into…uhh…leaving your hat on?