This blueberry lemon layer cake, made with triple layers of yellow cake with fresh blueberries and enveloped in the perfect lemon cream cheese frosting, is impressive in every way.

Every once in a great while, I whip up a cake that causes people to stop, look, sigh, taste, and then do face-plants. This blueberry-lemon layer cake is one of those desserts. No matter where I serve it–at home, at a potluck, as a birthday cake at a surprise party–people simply stop talking. (Yes, it’s because they’re stuffing their faces, and I take it as the greatest compliment.) And I know the same will happen for you, even when it’s not peak blueberry season, since the little orbs are available year-round, so you can enjoy this cake any time you wish. Lord knows The One and I have.–David Leite 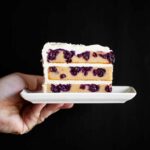 This blueberry lemon layer cake, made with triple layers of yellow cake with fresh blueberries, speckled with scads of lemon zest, and enveloped in the perfect lemon cream cheese frosting, is impressive in every way. This cake is a terriffic summer dessert, but it also makes one heck of a birthday and celebration cake also.
Prep 1 hr
Cook 30 mins
Cool 1 hr
Total 2 hrs 30 mins
Dessert
American
12 servings
543 kcal
4.72 / 14 votes
Print Recipe

For the blueberry-lemon cake

For the lemon-cream cheese frosting

Frost and serve the cake

How to turn this into a two-layer blueberry-lemon cake

This stunning cake can easily be made with just two layers in case, like some of us, you have only two and not three cake pans. Simply divide the batter between two 9-inch (23-cm) and bake for 30 to 35 minutes, until a toothpick inserted into the center comes out clean.

While we had declared this the “Summer of Pie” in our house, I could not resist this blueberry lemon layer cake recipe. (We had just recently gone blueberry picking in New Hampshire and I have a refrigerator filled with 13 pounds of blueberries.)

I made the cake and frosting in the afternoon and let the layers cool until the evening. Then I frosted and refrigerated it overnight. When I served it after dinner the next day, my husband, who is not a cake person, gave this a 10 out of 10. I asked if there was anything he thought needed improvement, and he couldn’t think of a thing.

The frosting is FLUFFY in the best possible way. If you love someone and want to show them, I would strongly encourage you to make this cake. Truly, I would say my only criticism would be that there was more frosting than I really needed, and I frosted generously. However if someone wanted to make buttercream rosettes or something, you will have plenty to do that with the existing proportions.

This is the kind of cake I would serve for any summer special occasion where I want to impress our guests. It’s decadent without being heavy. It’s lemony without overpowering the blueberries. And it tastes like a cake, not a muffin, which was one of my fears when putting it together.

The blueberries do sink, even with a coating of the flour mixture, meaning you don’t get flawless dispersal of berries. But the layers are thin enough that it doesn’t really matter. You also don’t get a ton of rise in this batter. But the cake still is fluffy. Not sure what alchemy makes that work. But I will not complain.

I consider this blueberry lemon layer cake recipe to be incredibly delicious, velvety, and just completely indulgent. These cakes are VERY moist and spongy; getting them off the cooling rack was difficult but I learned that applying parchment paper to the rack before turning the cakes out made it much easier to lift them off it later.

Other than that, this recipe was straightforward and lovely. This is a rich, dreamy, lemony cake, a bit like muffins but much more fabulous. So happy I had people to share it with! And each one of them totally loved it.

I used butter instead of baking spray and this worked well. I baked my cakes for 30 minutes each and this yielded beeeautiful, buttery, exquisite layers. I actually served this cake fresh rather than chilled and it sliced beautifully; the frosting wasn’t set per se but it wasn’t sloppy, either. Post-refrigeration, though, the rest of the cake was even easier to slice! Very neat and lovely layers.

I think you might even get 14 servings out of this rich, decadent cake.

This blueberry lemon layer cake is beautiful and delicious. Cream cheese frosting is not a fave in my household but everyone raved about this yummy, lemony icing. (Even family visiting from Chile dug this cake, which surprised me. My Chilean family are brutally honest, and usually find cake here in the US to be too dry. Not this time. Éxito total.)

I refrigerated the cake overnight for a party next day. Took the cake out 2 hours before dessert. Perfect.