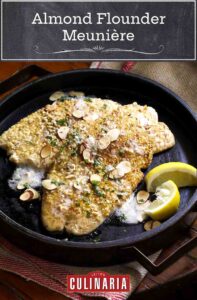 Almond flounder meunière uses baby flounder that is lightly breaded, cooked in brown butter, and sprinkled with toasted almonds. Try this Dorie Greenspan recipe when you want something quick but also super impressive.

This almond flounder meunière recipe is an inventive crossbreeding of two classic dishes: sole amandine, in which the fish is finished with sautéed sliced almonds, and sole meunière, in which the fish, often whole, is sautéed in browned butter. In my version, I use baby flounder (easier to find in the market here than true sole), lightly coat the fillets with ground almonds, sauté them in browned butter, and serve them with toasted almonds and a sprinkling of parsley (borrowed from the meunière). It’s a marriage of equal partners, and one that I think would easily win familial approval on both sides of the aisle.

A word on quantity. Since I usually make this for my husband and myself, I’ve given you a recipe that serves two, but of course, the recipe can be multiplied. If you have to prepare the fillets in batches, though, it’s best to lightly cover the sautéed fillets and keep them in a 300°F oven while you fry the remaining fish, using a little extra butter for each subsequent batch.–Dorie Greenspan

WHAT IS BABY FLOUNDER?

As Dorie notes, baby flounder is easier to find than true sole—and, we’d like to add, it’s far, far less expensive. Although it’s not always labeled as “baby.” We’ve noticed, and our local fishmonger confirmed, that wee flounder fillets tend to be available mostly in January. If you have to swap a single slightly larger flounder fillet for two smaller ones, so be it. Simply add a minute (or maybe 3) to the final cooking time. 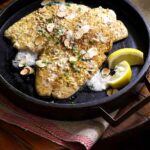 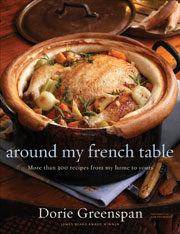 My husband and I really like sole meunière, but our favorite recipe for it has an astounding amount of butter in it. Although it would make Julia Child very happy, I’m not comfortable making it too often. We made this almond flounder meunière recipe with sole. It does not call for much butter. What it does have is ground almonds, which are a lovely addition to the flour and lemon zest.

As I tend to love all things lemon, I used the zest from the whole lemon mixed into the flour, as well as all of the juice at the end. This was a lovely dish, which was also easy to throw together. It felt like I was eating a tad bit healthier. I look forward to trying it again.