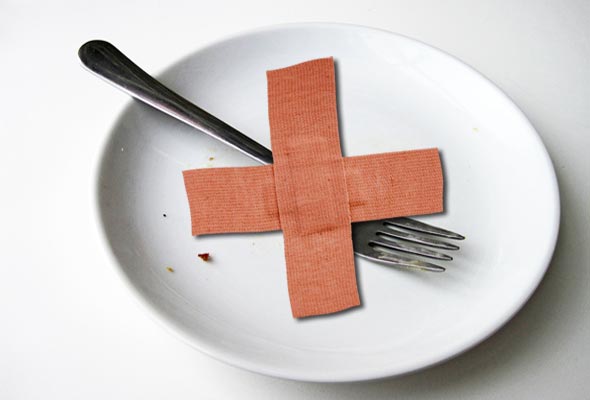 One immutable law of the kitchen when I was growing up was food heals. Regardless if I were laid low by a thwackingly bad cold, a bully from school, or just a winter weekend without snow, food cured all. The powerful antidotes? My grandmother’s chicken soup, my aunt Irene’s massa sovada (sweet eggy bread), my mom’s stuffed quahogs.

And that’s the philosophy I brought to the stove when I began cooking. It’s as if my dishes were shouting, like a carnival barker, “Looky here, looky here! A touch of gout, sir? Too many wrinkles, ma’am? Feeling blue about a boy, missy? Dr. Leite’s Magical Meals will make you feel like you just got a hug from the great Jackie Gleason himself.” And in each case, the palliative power of cooking—the kind that takes time and care and love—worked.

My belief was put to its most rigorous test on Saturday, September 15, 2001. New Yorkers were finally able to leave Manhattan after the attacks on the World Trade Center. The One, our friends, and I fled to the safety of our weekend homes. That night, as I served as many carbohydrate-rich dishes as the table would hold, six broken people slowly shook off the torpor of 24/7 viewing of the tragedy, the incessant roar of F-16 fighter jets overhead, and acute bunker mentality to hug, cry, even laugh.

That night, armed with Braised Beef Short Ribs, Celery Root and Potato Gratin, and Cheddar-Crust Apple Pie, I beat back a cabal of terrorists and won. So who could have imagined that a slight, troubled 18-year-old girl would eventually take me down.

Last month, The One’s niece, Callie (ed. note: not her real name), visited us for a week, as an all-expenses-paid birthday present from him. Coming from a rough area in Baltimore, and from a broken family, Callie dropped out of school in the eighth grade. Since then she’s ricocheted like a silvery orb in a pinball machine, bouncing from one set of friends to the next, one home to another, trying to find her place, even living with an older boyfriend for a spell while she was still a minor.

From the time Callie was very young, The One and I would go down and bring her and her two brothers to Connecticut for several weeks each year or take them on vacations to Disney World. It was our attempt at showing them that there is, indeed, another way to live—and that someone in their own family managed to achieve it. But in the end, it just didn’t seem to be enough: one nephew was shunted to his father’s home across the state due to a second marriage, another sits in juvenile detention, and Callie, now single, is back with her mother, both unemployed.

Years of seeing no appreciable effect had taken its toll; I felt steely, almost implacable when The One suggested we invite her again. Still, I reluctantly agreed.

To welcome her, I made Ina Garten’s Lemon Chicken with Croutons, a dish I made the family one December, which I knew Callie loved. My hope was the smell of an honest, no-agenda meal would envelop her and soften reentry, for both of us. The door opened and she slunk into the house, eyes downcast, the tails of her earbuds wriggling down either side of her face.

“Hi, Uncle David,” she said shyly. Why was I so implacable? I thought. She’s just a lost kid. I scooped her up in my arms, lifting her off the ground as I hugged her. Her clothes smelled of kitchen grease and mildew. Before The One even had time to shrug off his coat, I started my never-fail Cool Uncle Riff. See, The One is preternaturally clueless to anything hip. For years, he thought Fergie and the Black-Eyed Peas referred to Sarah Ferguson, the former wife of Prince Andrew, and one of her food charities.

As I was toasting the croutons in a skillet, Callie sidled up to me, and together we mercilessly teased The One about his remarkable unfamiliarity with pop culture. A shared look between him and me let me know he was okay with being the town fool for the evening. A hit for the greater good, he seemed to be saying.

While I carved the chicken, she volleyed questions: “Uncle David, remember the pasta and shrimp you made for all of us that time?” “You know, we never made those chocolate chip cookies you promised me.” “Uncle David, remember that time we sat in the freezing garage while we made the stars for the Snowflake Cake that one Christmas?” “Oh, and remember when my dad made those chimichangas that summer?”

It was then I realized so many of our times together—and, it seemed, her best memories—were wrapped around food. I decided that for the time she was with us, I’d make every single one of the dishes she’s liked throughout the years—a kind of greatest hits of the table.

By the end of dessert—my favorite love food: Sour Cream Apple Pie—Callie couldn’t shut up. Across from me wasn’t a tough, tattooed 18-year-old woman but the warm, sensitive kid who loved to prance around in her bathing suit, taking the occasional arc through the backyard sprinklers.

“And did my mom tell you,” she said, pointing her fork at us, “I’m going back for my GED then going to school for medical billing?” Praise God, and pass the peas. Her mother, who was also planning to do the same, had mentioned Callie was considering taking the GED. The One and I were determined not to bring it up unless Callie did, so as not to pressure her—although we hoped while she was with us we could encourage it.

“She’s changed,” he said later that night, taking pillows from our bed and turning down the comforter. “More mature, more sure of herself, don’t you think?”

“I do,” I said. “I’m impressed—and ashamed I didn’t want her here. I’m sorry.” He nodded. It was forgiveness, the kind that only 17 years can wrought.

For the rest of the time Callie was with us, I served favorite after favorite. And as I stood chopping, frying, and stirring, it was as if I were trying to infuse the food with the will to go back to school. I imagined, as silly as it seems, that years of wanting her to make something of herself were concentrated, like a demi-glace, and dripped from the wooden spoon into the frying pan. That common sense were ground up with a mortar and pestle and sprinkled in along with salt and a hint of pepper.

And it appeared to be working. Several days into her stay, Callie relaxed. She chatted more freely, forgetting to check her cell phone every minute, trippingly discussed dreams for the future, and relentlessly teased both of us. (Apparently my Cool Uncle Riff was good only until circa 2006. After that, I, too, was clueless.) One morning at breakfast, while she flipped through her grandmother’s recipe file for her black-bottom cake recipe, I whispered to The One, “I think we broke through.”

“I found it! Can we make it? Please? Please?” There was that girl in the sprinklers again.

The One and I stood back from the counter that afternoon and let Callie bake. The One shook his head when he saw me lean in because she wasn’t sifting the dry ingredients the way I would, and I backed off. I cleared my throat when he wanted her to use couverture chocolate instead of the Nestlé chips called for in the recipe. He demurred. The result, her first cake, wasn’t bad. But more important, it was a connection between Callie and her grandmother, a connection that otherwise lives only in a smudged envelope full of dog-eared photographs she keeps tucked in her purse.

That night, while watching a Netflix movie, The One handed Callie her birthday money, along with a tidy sum for helping him with stuffing envelopes—exactly equal to the cost of her GED tuition. Then came the slippery slope between being uncles and authority figures. “You know, there’s enough there to pay for your GED,” he suggested gently.

“Thank you,” she said, hugging him. I felt full, satiated.

After she left, it was radio silence. No thank-you card, no phone call, no texts for three weeks.

“Hello, Callie,” I heard The One say into the phone yesterday afternoon. I listened to the one-sided conversation, anxious for an update.

“Did you enroll in the GED program with the money I gave you?” Yes. Please, say yes.

A long pause. I could read the answer from how he traced the edges of his book with his finger. “Clothes? Really?”

I felt defeated. My instinct, because that’s the way I’m hardwired, was to go in the kitchen and cook something. That’s all she needs, I thought. I can fill her full of hope again. I know I can. Instead, I made myself a little something. I’m the one who needs the healing now.

Hungry for more David Blahg? Chow down on these: