After traveling the world in search of the latest in all things cocktails, Jerry Thomas, affectionately called the Father of the Cocktail, opened his celebrated bar on Broadway and 22nd Street. He described sours in his 1862 book, Bartenders Guide: How to Mix Drinks, the first recipe book for bartenders. Our version of Thomas’s New York Sour is made with apple brandy from Laird’s, America’s first commercial distillery. Opened in Scobeyville, New Jersey, and in operation since 1780, Laird’s has supplied everyone from George Washington’s troops to visiting foreign dignitaries with its legendary apple-based spirits.

Any leftover apple shrub not needed for the New York Sour recipe can be served over ice and topped with sparkling water to make a refreshing nonalcoholic beverage.–Daniel Humm and Will Guidara

Shrub? Seriously, that’s what someone decided to dub a concoction made of fermented fruit, sugar, and vinegar? We’re not sure which has us more confused, that or the fact that someone thought to do this in the first place and then toss it in a cocktail and dub it a New York Sour. We gotta say, though, after tasting this easy drink recipe, we’d like to thank that someone. 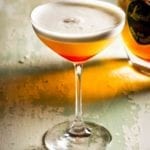 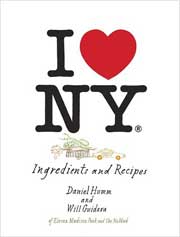 For the apple shrub

For the New York Sour

Huge thumbs up. Your first reaction might be, “I have to wait a week for a cocktail?” But this New York Sour is an easy drink recipe and makes a lot of shrub, so think of it as a good investment. The cocktail’s refreshing, sophisticated, and has a beautiful apple flavor as well as a perfect texture from the foamed egg whites. The vinegar’s balanced by the sugar and apples and adds a nice tartness. Drizzling the shrub on the surface is a brilliant idea—it gets the aroma of the shrub close to the nose, which intensifies the taste of the apples. The shrub’s very versatile and, as the author mentioned, delicious with some sparkling water. I’m sure it’d work well in other cocktails and maybe even desserts. I also love the deep pink color the cocktail gets from the apple skins.

Success! This New York Sour recipe is easy to follow, and I think most people would love it. Not only did this make a lovely cocktail, but now I also have about a quart of apple shrub left over. I almost like this versatile, pungent mixer more than the drink itself. I’ve been using it for homemade soda (1 tablespoon shrub + 1 cup sparkling water) as well as mixing it with vodka. I enjoyed the cocktail, too but found it to be surprisingly sweet (I don’t get weak-at-the-knees for sweet cocktails). There was a tinge of sourness, but the cocktail reminded me a lot of a candied apple. Next time I make this, I’ll try omitting the simple syrup or at least cutting it in half.

The apple shrub turned out very nicely and was definitely worth the effort. I’ve wanted to experiment with shrubs for a long time so had to give this recipe a whirl. I ended up with almost a quart of gorgeous, rose-colored shrub. I might try a different type of apple in the future—Red Delicious, though a classic, can be kind of boring. As far as the New York Sour goes, I had a problem with the egg white separating when I let the drink sit for a moment, which I suspect had to do with the acid level, but this won’t deter me from trying the New York Sour again.