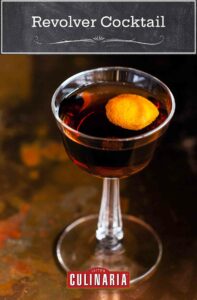 If you’ve never had a Revolver cocktail, have we got a treat for you. Along the lines of a Manhattan or Old-Fashioned, the addition of coffee liqueur adds just a little oomph.

My first encounter with The Revolver went like this: A favorite regular of ours frequently traveled for business, and he enjoyed a good cocktail wherever he went. One night he came in and told us about a bartender he’d recently become enamored with on his latest trip to San Francisco: Jon Santer. Santer is a bartender’s bartender and something of a legend among those in the know. He now owns The Prizefighter in Emeryville, California, but before that he worked in bars all over San Francisco for years.

It was while Jon was working at Bourbon & Branch that our regular enjoyed his cocktail, The Revolver. The drink was described to me by our man, and while I tried my best to replicate it using his instructions, he left unsatisfied. As luck would have it, the drink appeared in a Wall Street Journal article the following week, so I cribbed the recipe and surprised our regular with what I thought was a perfect version of his new favorite drink. Although he couldn’t put his finger on why he still wasn’t satisfied with my version of the revolver.

Later that year I found myself bartending alongside Jon at a party in London, and eventually, I got around to asking him what the secret to the drink was. As it turned out, the recipe in the newspaper was slightly off. I was able to return home and surprise one of our favorite guests with a good story and an even better cocktail, and Jon and I have been close friends ever since.–Jeffrey Morgenthaler

HOW DO I FLAME AN ORANGE PEEL?

This is a popular bar trick that dates back to 1970 in Los Angeles, was revived by Dale DeGroff in New York in the 1980s, and continues to be popular among bartenders everywhere. It’s the flamed orange peel. The trick involves holding an orange peel close to an open flame and briefly igniting the volatile oils over the surface of the drink. Flaming the orange peel should be a bit of bar magic—it must catch the guest completely by surprise. The bartender has to execute it in one fluid motion. When done properly, the guest just catches it out of the corner of their eye; then they smell the orange oil.

Begin with a large, thick swath of orange peel, about 1 inch (2 1/2 centimeters) by 2 1/2 inches (6 centimeters). Hold a lit match or lighter between the peel and the surface of the cocktail and carefully squeeze the peel so its oils pass through the flame and onto the drink’s surface. From there it’s business as usual—just wipe the rim of the glass with the orange peel and decide whether to drop it in the cocktail or discard it. 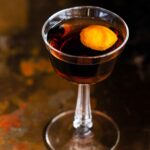 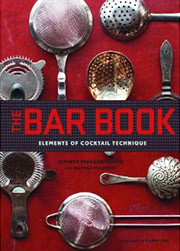 I thought this was fabulous! If you’re looking for an alternative to a Manhattan, then this might be it. I was surprised by this cocktail. The orange and the coffee went really well together—the coffee flavor wasn’t very prominent, it was just a nice addition that contributed to the depth of the drink.

I made this on a whim so I didn’t have a spiced bourbon on hand. I used Maker’s Mark, which I find to be a bit more mellow and sweet, and it was lovely (although one with a little spice would’ve been better). As for the coffee liqueur, I happened to have a nip of Kahlúa on hand. I’m sure housemade orange bitters are great in this but I used Regan’s orange bitters instead.

This was my first flamed orange peel, and it wasn’t as scary as it sounds, so I’d recommend giving it a whirl. It’s pretty fun! All in all, a fine whiskey drink—one that I’m sure I’ll concoct again.

A terrific, deeply flavored cocktail that’s a nice alternative to a Manhattan and takes only a few minutes to prepare. The touch of coffee flavor is just right with the orange bitters and especially nice if you have hand-crafted bitters (in our case, a talented and generous family member provided the perfect homemade orange bitters to use in this drink). Fee Brothers or another posh store-bought version would be fine for the bitters.

If you have Bulleit on hand, by all means use that, but it will be fine with a more ordinary bourbon. A variation to try would be to use Bulleit rye for a slightly less sweet version. I used a Kirkland straight Kentucky bourbon because that was what we had on hand, and it was less sweet than Maker’s Mark (I only had Bulleit rye on hand). I used Kahlúa since that’s our normal coffee-flavored liqueur.

It would be as easy to prepare a batch of this as it is to prepare a single cocktail, and although you want it stirred rather than shaken, the cocktail shaker that fits your strainer works great for this. (In fact, I won’t tell if you shake it. Icing this bourbon-based drink not only chills it but dilutes it slightly, allowing the flavors to bloom a little as they might with a single malt.) I used small metal tongs to hold the orange peel while I flamed it with a handy-dandy little kitchen torch then dropped the peel straight into the strained drink and served it up.

If you are absolutely afraid of flaming the orange peel, I’d wager that you could pull thin threads using a cocktail zester (the kind with 4 holes or 1) and pull the orange peel off the orange directly over the drink as you would for a cafe Borgia or over sweet vermouth. But, honestly, I felt it was perfectly safe to hold the peel in the tongs with one hand and hold my little torch in the other. You needn’t do more than singe the edges for the oils to disperse into the glass.

I really quite liked this drink. I used Wild Turkey spiced bourbon, homemade coffee liqueur, and store-bought orange bitters. The coffee liqueur mellows out the bourbon, and the bitters add a little extra zip yet don’t dominate. This is an easy drink to make and is nice for those of us who don’t care to drink our bourbon straight. It’s also good if you leave the ice cubes in the drink.

I added the orange peel as a garnish rather than flaming it. I served this in a small wine glass. I noticed a little too much clove flavor coming through, so next time I may try making some flavor adjustments.

This was a very interesting drink. I like each of the ingredients separately but had never tried a drink containing all of them. It was very interesting! It only took a couple of minutes to throw together, which was a blessing after a rough day at work.

used store-bought bitters and cheap Ezra Brooks bourbon whiskey, and they worked great! Not sure that everyone would love this particular drink, but my husband and I both did!