When making tortelloni filled with spinach and ricotta, I sometimes end up with leftover filling. It occurred to me that it would make a very nice pasta sauce, so I added a little cream to the spinach and ricotta mixture and it was delicious—so much so that I’ve been making it just to use as a pasta sauce. Serve the pasta and sauce at once.–Giuliano Hazan

For best results, notes author Giuliano Hazan, rely on whole-milk ricotta. For fastest results, he adds, reach for a bag rather than a bunch of spinach. 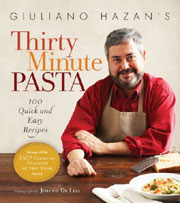