This corn pie is overflowing with a buttery corn, celery, egg, onion, and parsley. Think corn on the cob but all encased in a flaky golden crust. A great side for Thanksgiving.

This old-fashioned corn pie has roots that run deep into Pennsylvania Dutch country, and while recipes vary on the particulars, in general fresh-cut corn kernels and sliced hard-boiled eggs are cooked with milk and often flour under a flaky pie crust. A corn pie recipe similar to Suzanne’s can be found in the Pennsylvania Trail of History Cookbook (2004) and is credited to the Cornwall Iron Furnace in Cornwall, Pennsylvania, an iron-making facility that operated from 1742 to 1883 and made pig iron and domestic products, as well as cannon barrels during the Revolution and the Civil War. As in that particular pie, Suzanne’s grandmother made her corn pie in a cast-iron skillet. “It is, for us, the very essence of summer,” says Suzanne, “and we usually serve it with fresh, sliced summer tomatoes and homemade mayonnaise. For my family, summer has not arrived (and doesn’t dare depart) until we’ve made this corn pie recipe at least once.”–Suzanne Oakley

Those helpful folks at America’s Test Kitchen have this to add: “The flavors of Suzanne’s corn pie recipe and the history behind it made it a keeper, though we had some trouble getting the filling to hold together like we wanted. Though it’s less visually appealing than using only whole kernels, we found that pureeing half of the corn with a couple of eggs helped make the filling more stable. We also opted in favor of using heavy cream versus milk since it created a smoother texture and richer flavor.” 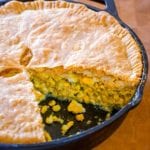 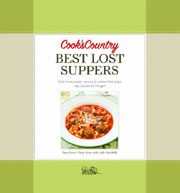