These griddle cakes, also known as svele in Norway, are made with sugar, butter, kefir or buttermilk, flour, and baking soda. They are traditionally served with brown cheese, jam, or sour cream, but berries and fruit are excellent as well.

These are not your ordinary griddle cakes. These are, thanks to the addition of buttermilk to the batter, along with just a little patience while the batter rises, light, fluffy pancakes that, in the words of at least one person who’s made them, are “hands-down the best pancakes I have ever made!”–Angie Zoobkoff

WHAT ARE NORWEGIAN PANCAKES?

This recipe is inspired by a Norwegian classic. But not those skinny, flat, crepe-like pancakes you may know. These Norwegian pancakes, or svele, are similar to American pancakes although they’re typically reserved as an afternoon snack with coffee, often folded in half around some butter and sugar or Norwegian brown cheese. As for those of you who are history or trivia facts, in the words of the author, “Flat cakes have a long tradition in Norway—particularly in western Norway—that stretches back to the 1300s when the daily lives of most Norwegians were marked by poverty. Every ingredient was used to its fullest so as not to be wasted. Sour milk, or surmelk, was a common commodity and families mixed leftovers with dry goods for baking. In this recipe, I suggest using kefir—a type of sour milk often used to make svele—but you can substitute buttermilk.” 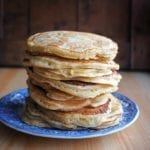 These griddle cakes, also known as svele in Norway, are made with sugar, butter, kefir or buttermilk, flour, and baking soda. They are traditionally served with brown cheese, jam, or sour cream, but berries and fruit are excellent as well.
Prep 25 mins
Cook 20 mins
Total 45 mins
Breakfast
Norwegian
8 servings
535 kcal
4.80 / 5 votes
Print Recipe 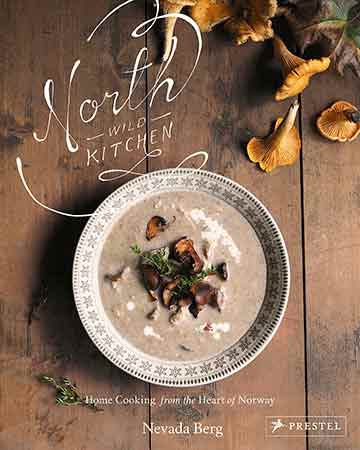 No joke, these were hands-down the best pancakes I have ever made! With such a simple batter, I wasn’t expecting such light and fluffy pancakes, but that’s exactly what they were. Thick yet light, fluffy and super flavorful.

I used low-fat buttermilk instead of kefir and I imagine that is what gave the pancakes such a lovely tender crumb. I served these lovely griddle cakes with some homemade fig preserves, a touch of maple syrup, and some fresh blueberries for sprinkling.

As for the recipe itself, this was a lot of pancake batter! I am going to experiment with keeping some in the fridge as directed by the recipe, but I also froze some to see how they defrost next weekend. I would love to try them with some melted butter and sugar as suggested, as well as with a dot of sour cream. This recipe easily serves 8 people for breakfast.

Overall, we were delightfully surprised at just how tasty these Norwegian griddle cakes were! They were a wonderful start to our weekend! I also really liked learning about the tradition of Norwegian svele. It’s fun making a recipe where you can learn some cultural facts at the same time!

Deliciously irresistible. Pancakes are a rare treat in our house, so I actually made a half recipe to reduce temptation, but we both thought these were definitely worth having. I made them with buttermilk and loved the texture. You can pick them up and they do not crumble or fall apart, you can wrap them around a slice of cheese, and they probably will store or travel fine.

Scaling down is easy with this recipe, thanks to weights. The only thing I would consider changing is to use less sugar. After whisking 5 to 7 minutes by hand with a wire whisk, the egg mixture had a thick foamy texture, short of a ribbon stage if you were using an electric mixer. To stir in the buttermilk and the sifted flour mixture, I used a flat silicone whisk, gently folding it and then giving it 25 minutes to rest as it was a cold morning and the kitchen temp seemed to make the batter a little slower in swelling up. In a cast iron pan, a smidge of butter brushed on was all that was needed and I added a little bit every 2 pancakes.

Surfing for the best temperature, I tried to keep the pan around 300℉, between a low and medium setting, so timing varied a little from 90 seconds to 3 minutes a side, trying to get a consistent brown without scorching. The batter rises up a bit as it heats through and the bubbles come thru, and it is easy to flip, though if you made them a little smaller, that would work even better. I kept a warm pan in the oven, set to 140℉. None of the pancakes stuck to each other! We packed up the extras with a small square of waxed paper between each pancake to make them easy to remove after refrigeration.

We ate ours with some breakfast cheese as well as trying with a smear of peanut butter, which explains why we had to have a second one each. Research! I think ONE is a serving but they are so “moreish” that, realistically, folks will be reaching for a second one, especially if lingering over a brunch socializing.

These are a solid winner and easy enough to make on holiday weekends when you have hungry happy folks around to share and you can even delegate whisking.

I also saved a couple and gave some away, and wanted to pass on that they held up beautifully as long as 3 days, reheated gently in a cast iron skillet. I stored them separated by parchment squares in a resealable plastic bag. Feedback from everyone was how impressive they were several days on, and that they handled just as nicely without crumbling or breaking apart. This recipe is a winner.

These griddle cakes remind me of the lingonberry crepes that were part of my youth. Easy enough to cook for even an amateur yet pleasingly different in taste. The slight tang provided by the sour milk makes them a somehow more festive alternative to the pancakes and syrup more easily available.

I made these with buttermilk instead of kefir since my grocery was out of plain kefir on the day I did my shopping.

I served them first with butter and sugar. My second batch received the same topping I give regular pancakes, which is fruit and whipped cream. It was while defrosting the strawberries for topping I remembered that my grocer was out of regular kefir but had strawberry kefir available. Sometime in the future, I may test one of the fruity kefirs to see what impact it would have on the product. As for now, both toppings were successful.