Wild mushroom grits is a humble dish that gets elevated to new heights by chef Marcus Samuelsson’s additions of wild mushrooms, bacon, Parmesan, truffle oil, and heavy cream. Rustic, sure. But also pretty glamorously delicious, too.

As the state of South Carolina declared in 1976 when it named grits the official state food, “Throughout its history, the South has relished its grits, making them a symbol of its diet, its customs, its humor, and its hospitality . . . A man full of [grits] is a man of peace.” Grits are such a staple southern food that it is said that three-quarters of the grits sold in the United States are purchased in the “grits belt” that stretches along the East Coast from Louisiana to the Carolinas. I’ve grown to love this humble dish of ground corn baked or boiled with water or milk, and like to dress it up with luxury ingredients like truffle oil, great cheese, and wild mushrooms.–Marcus Samuelsson 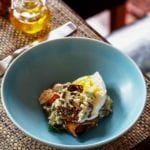 Take a homey dish of grits and dress it up with heavy cream, salty Parmesan, truffle oil, and a mixture of umami-packed wild mushrooms. Spooned over a poached egg, it makes for a superbly luxurious upgrade.
Prep 45 mins
Cook 15 mins
Total 1 hr
Sides
American
4 servings
586 kcal
5 from 1 vote
Print Recipe 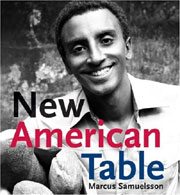 This grits dish is Southern comfort food elevated to a new level. The recipe is incredibly rich, but if you’re looking for a decadent meal, this is delicious. If you’re watching your calories and cholesterol you could also leave out the eggs, bacon, and cream as I did the second time I made it…it’s still perfectly wonderful!