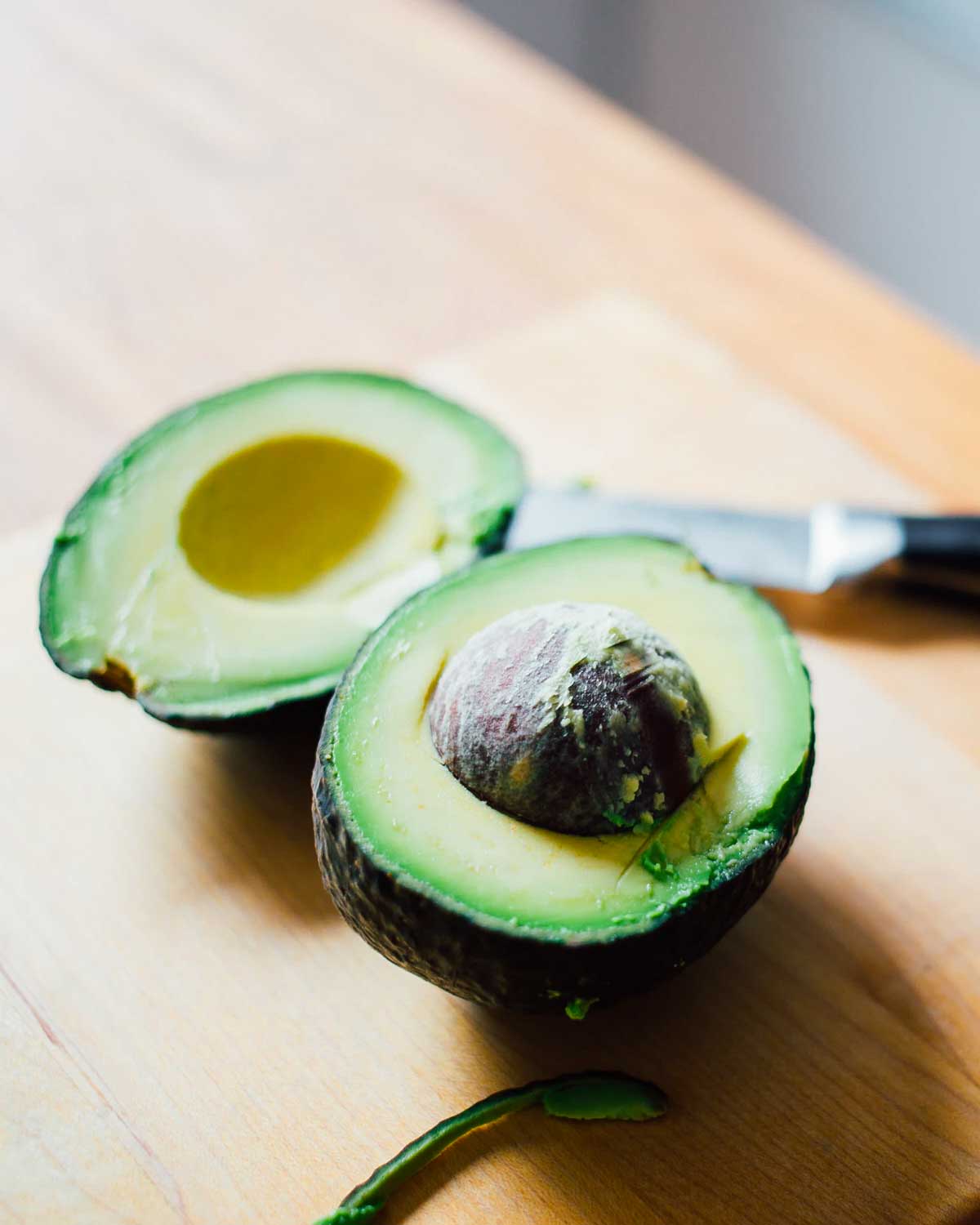 I have a weakness for avocados. I eat them daily…correction…I DEVOUR them daily. Scooped straight from the shell with a spoon. As a cradle for seafood salad. In smoothies. Grilled. You name it.  I can always find a way to sneak some avocado into my day.

The one thing I haven’t figured out is how to keep extra avocado from turning brown.

I know I can squeeze lemon juice on avocado slices, cover them with plastic wrap and pop them in the fridge for later in the day. I also know I can place a whole ripe avocado in the fridge and it will keep longer. But what about those precious leftover halves? How do you store them for later without having them turn an unsightly brown? 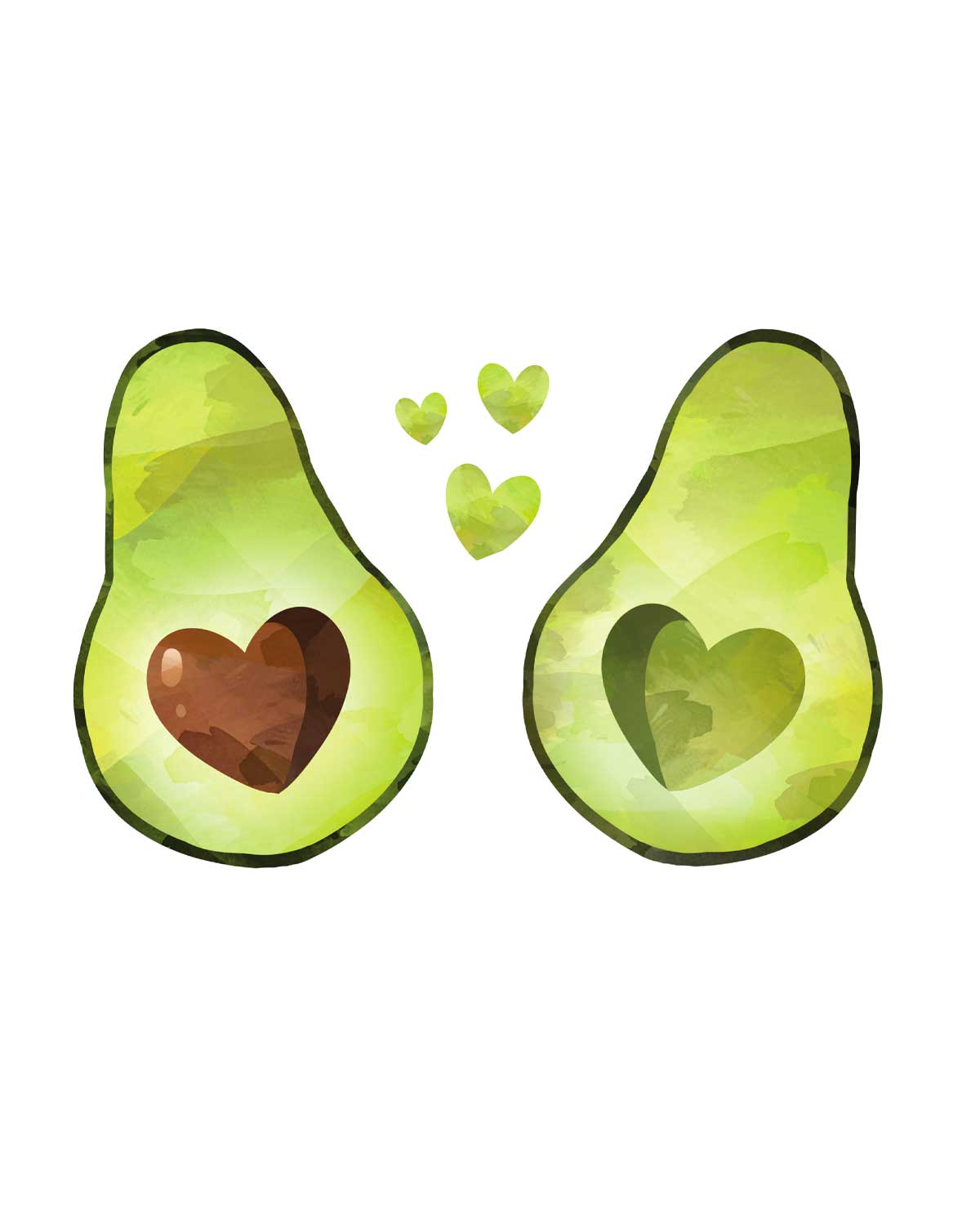 During the last several months, I repeatedly bumped into the idea that blanching avocados can keep them from turning brown. I first heard of the notion in November. An email showed up in my inbox with the subject line, “Why Boiling an Avocado Keeps It Green for Hours.” I didn’t think much of it at the time, but when the topic randomly popped up in a conversation a few weeks later, I started to wonder if there was something to it. A little internet sleuthing revealed that blanching avocados was actually a thing. I discovered articles dating back to 2012 and from as far away as South Africa. Could blanching the delicious green orbs whole significantly delay browning after they’re cut? Curious, I set out to see if it really works.

Okay, a little science is required to understand what’s happening. I needed to answer two questions: Why do avocados turn brown? And how could blanching possibly stall this?

Turns out avocados contain an enzyme under their skin called polyphenol oxidase (PPO). Once an avocado is cut, the enzyme becomes exposed to air and a chemical reaction occurs. The enzyme (PPO) reacts with oxygen in the air and, as a result, the flesh of the avocado turns brown. This is known as “enzymatic browning.”

Blanching delivers heat and heat deactivates polyphenol oxidase which, in turn, means less browning. So, the theory goes, blanching whole avocados before they’re cut should transfer heat to the enzyme and deactivate it, thereby slowing the browning process.

Actually, what my research revealed is that PPO activity is slightly decreased at 140°F (60°C). We know that the blanching process will provide the heat we need to move through the skin of the avocado, from outside the fruit to inside the fruit. What we don’t know is exactly how long to blanch our fruits. The experiments I’ve read recommend blanching times that range from for 10 to 20 seconds. Let’s see.

I filled a large pan with water and brought it to a boil. Then I took a piece of paper, drew a line down the middle of it, and noted on each side which avocado was which. (This may seem silly, but I am fully capable of getting busy and forgetting which one was on which side. Don’t laugh.)

Everything prepped, I was ready to test.

Next, I cut the avocados in half, removed their pits, and placed each in their assigned seating. I started the timer and monitored the avocados for 8 hours, checking on them every 30 minutes. 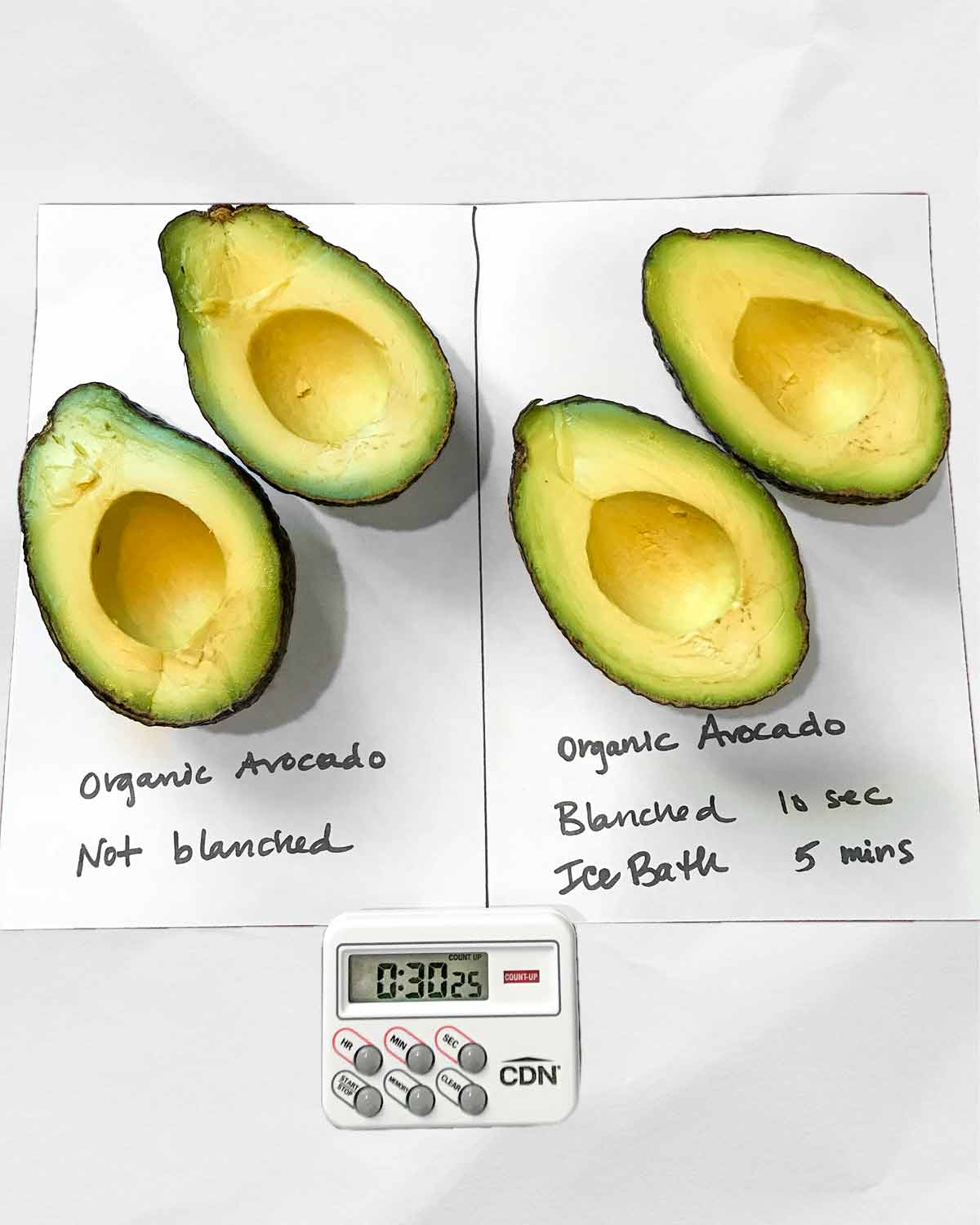 You’ve guac to be kidding me

The first hour went by and a few brown spots appeared on both avocados.

The same thing happened during the second hour.

As the third hour went by, a few more spots appeared on both and a bruise presented itself on the not-blanched fruit. “It’s still early,” I thought. “Be patient. It’ll happen.”

By the fourth hour, the flesh on both had started to turn distinctively brown. “Both avocados… the same?! What’s happening here?” I wondered. 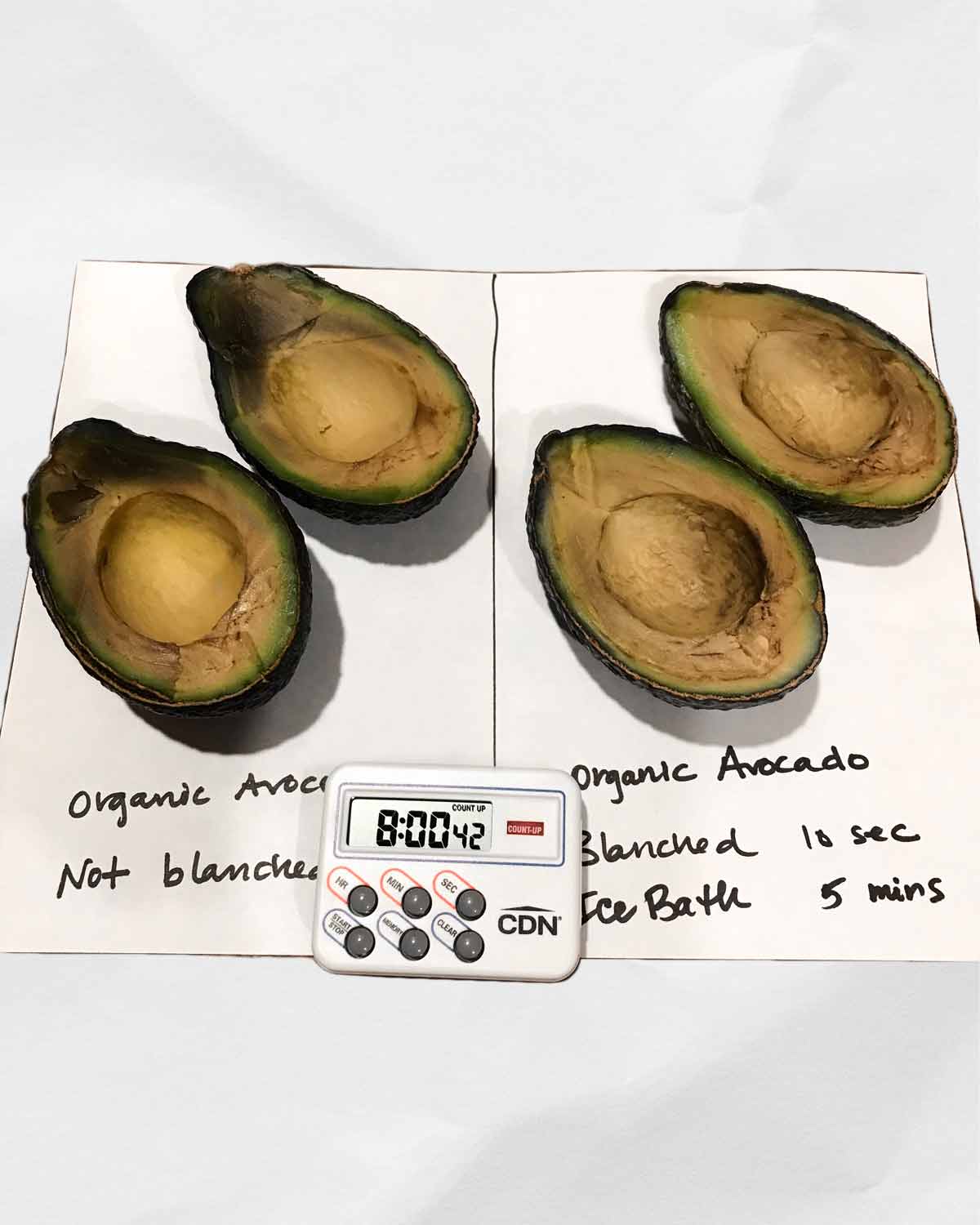 It didn’t work. The magic didn’t happen. I mean, maybe the blanched avocado was the slightest bit less brown…but it wasn’t enough for us to say the great avocado conundrum had been solved.

Why weren’t there any discernible differences? Did I do something wrong? I went back over everything in my head – blanch, ice bath, check every 30 minutes. Why didn’t it work?

Maybe it was because they were organic! Could that be? I had to know.

A few days later and two conventional avocados in hand, I repeated the experiment. As before, one fruit skipped the spa treatment and went straight to the cutting board. The other spent time in the avocado jacuzzi (20 seconds this time) and then took an ice bath for 5 minutes. Again, I monitored the avocados for 8 hours, checking on them every 30 minutes. 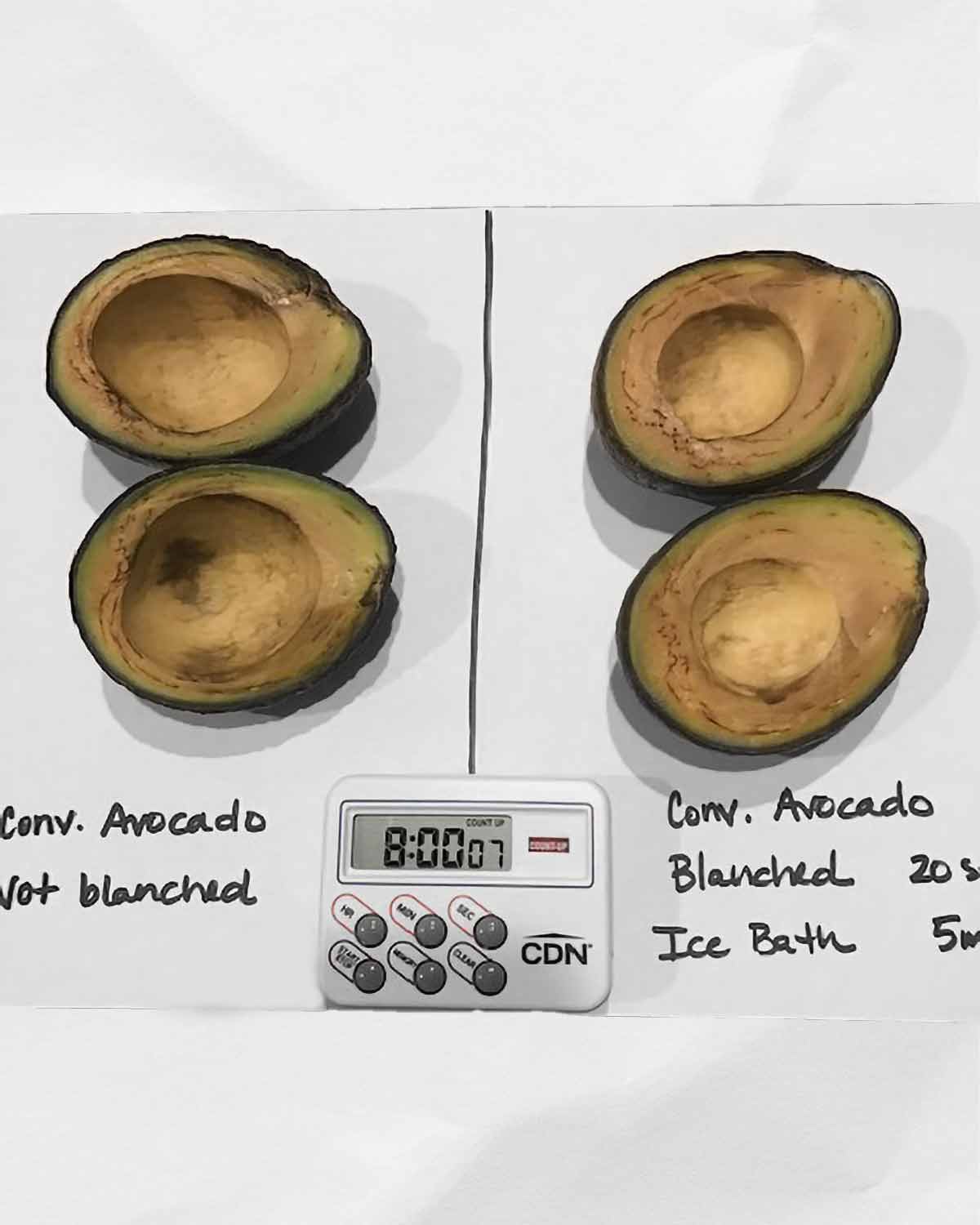 Everything will be all ripe

A few good things did come out of this. My inner food geek got to blanch avocados and learn a little seventh-grade science-y stuff in the process. Although some sources say you can leave the avocados in the boiling water a little longer, I don’t recommend it. You run the risk of altering their creamy, luscious avocado-ness. Blanching, I’ve decided, isn’t worth the effort.

Second, guacamole! Not wanting to waste the avocados, I turned my experiments into small batches of my go-to nosh for slightly less than perfect avocados. And that’s never a bad thing. I also learned that brown spots on a fresh avocado are perfectly safe, if not always desirable, to eat. (How did I not know this?!) They may taste slightly bitter, but they won’t hurt you. Armed with this knowledge, future me won’t be doing any more scraping. No. I’ll be mixing in those brown spots, and that means more avocado and less food waste for me.

© 2021 Jennifer Mallock. All rights reserved. All materials used with permission.

Self-proclaimed "lover of all things food,” Jennifer grew up in Michigan surrounded by people that helped nurture her culinary curiosity. Whether she was learning to make tortillas from scratch at her neighbor’s house or paczki at the local bakery, she has been copying recipes and absorbing tasty knowledge since an early age. Over the years, her interests have expanded to include recipe testing, food photography, and food history. Jennifer lives in Chicago with her husband, is an avid cookbook collector, and happily admits that she’d rather shop for spices than shoes any day!