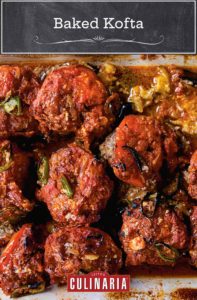 Baked kofta stacks warmly spiced beef and lamb patties on top of eggplant, then blankets them with an Aleppo pepper-rich tomato sauce.

Kofta are something of an obsession throughout the Middle East. These meat patties can be baked, fried, grilled, braised, stuffed into pita and drizzled with tahini, or baked in a tomato sauce and served with rice.–Sami Tamimi and Tara Wigley

Why can’t I use lean meat?

For kofta kebabs, the amount of fat makes a huge difference. Lean or extra lean ground beef is just too dry for recipes like this. Not only does it ensure that your kofta remains juicy but it also helps to stop the patties from shrinking. Dry meat will shrivel up and crumble, which is the last thing you want in a meal like this. If 20% fat makes you uncomfortable… then maybe you’d prefer something green and crunchy? However, if you’ve made peace with yourself, there’s a good reason to suggest a higher-fat meat. 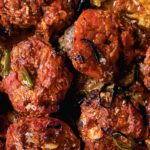 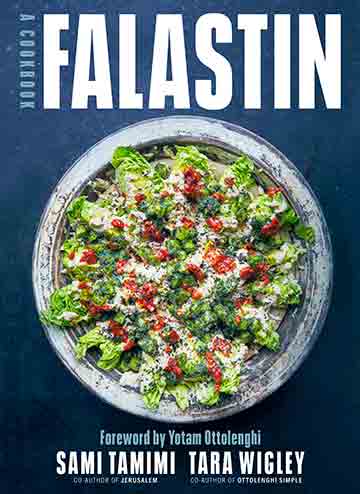 This baked kofta took me back to my beloved Mediterranean world. I love to use cinnamon as I do in any other stew. The 12 kofta would serve at least 6 as I couldn’t eat more than one as a main dish (I served it with bulgur.) The baking time was accurate and the sauce was thick and yummy. It was delicious.

I can see why these baked kofta are “something of an obsession in the Middle East,” as the headnote says. The flavors in the meat patties, from the garlic to the cinnamon, allspice, chili flakes and tomatoes are so good against the beef and lamb. Then to add the creamy eggplant and acid from the tomato on top and it’s pretty much a perfect package. And of course, the pop from the green chile on top. Don’t forget to toast some pine nuts to sprinkle on top before serving – they provide a nice nutty crunch that simply accents everything.

The recipe itself was straightforward if on the complex side. By complex I don’t mean complicated. It did take time but you have the option of doing the sauce and the meat mix a day ahead, which can be very helpful. The instructions were spot on. I wouldn’t really change a thing but if you really like the flavor of lamb, maybe go three-quarters ground beef, one and one-quarter lamb.

Tepsi (beef and eggplant casserole) had actually been floating through my cooking feeds for a while now and I was really excited to see and try this recipe for baked kofta.

There were quite a few steps to get through, but the end result was worth all the effort and hands on cooking time. This recipe may not be everyone’s favorite in terms of how long one is actively preparing it. But if you make it in steps and have some time in-between to drink a cup of coffee or get on with other commitments and come back to the next process then I think it’s no problem at all. It took 70 minutes of solid hands on time to get it into the oven and then another hour to get it on the table. Total time 2 hours 10 minutes.

The portion sizes were generous and it presented beautifully, the flavors were delicious and harmonious. I think 6 as a main and 12 as a side would be a good guideline for serving sizes.

I used store-bought tomato puree as I didn’t have enough time to make my own, but the flavors were so good that I regretted not tripling the sauce in the end as I liked it so much and could have used it later on for something else. I also didn’t have Aleppo chile, so I used red chile flakes instead.

Baking times of eggplant slices took 20 minutes to bake in my SMEG oven with fan assist on. Onions took 5 minutes to brown nicely and the sauce reduced nicely and developed well in the 20 minutes allocated. My daughter couldn’t stop “testing” it.

The kofta mixture comfortably made 12 well sized kofta with the measurements given, my mixture was wet, but formed the patties well. Baking dish times were spot on and the dish came out richly aromatic. The kofta stacks remained intact and did not fall apart when removing from the dish.

I had around 3/4 cup liquid from the dish that I reduced for around five minutes and then spooned about 1 tablespoon over each kofta.

There were definitely 12 well sized servings. I could imagine making this in a few trays ahead for a party and then reheating to serve. It was a delicious dish for both adults and children and I’d definitely make it over and over again. However, in future I would plan the processes ahead of time to limit all the hands-on time at once.