Adapted from David Waltuck | Chanterelle: The Story and Recipes of a Restaurant Classic | The Taunton Press, 2008

I’ve always been attracted to the idea of elevating home food, and this dish from Kate Zuckerman goes about as far as you can in that direction, exceeding my wildest expectations about the possibilities for bread pudding. (Then again, I remember the time my father took me to a Jewish deli that served bread pudding made with onion rolls, so, for me, the bar on bread pudding is pretty low.) Kate makes her bread pudding a refined affair by using brioche and a very custardy crème Anglaise sauce. Keep in mind that brioche is baked into loaves of varying size; you can also use challah or any buttery egg bread for this dish. I use eight slices of bread that are roughly 1/2 inch thick.–David Waltuck and Andrew Friedman

Yes, this cherry-vanilla brioche pudding is sorta fancy schmancy. At least in terms of first impressions. Not so much in the actual creation. Lucky you. 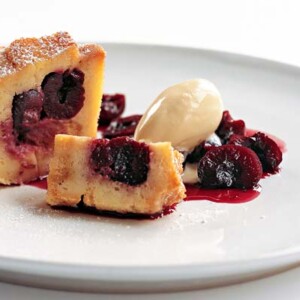 Keep in mind that brioche is baked into loaves of varying size; you can also use challah or any buttery egg bread for this cherry-vanilla brioche pudding. I use eight slices of bread that are roughly 1/2 inch thick.
David Waltuck and Andrew Friedman
Prep 1 hr 30 mins
Cook 1 hr 30 mins
Total 9 hrs
Dessert
American
6 servings
1164 kcal
5 from 1 vote
Print Recipe 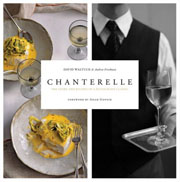 For the maple-star anise ice cream

For the cherry compote