Thanksgiving Cranberries explains more than you already know about the harvesting of those sweetly tart berries that must make an appearance on the holiday table. David Leite shares all. 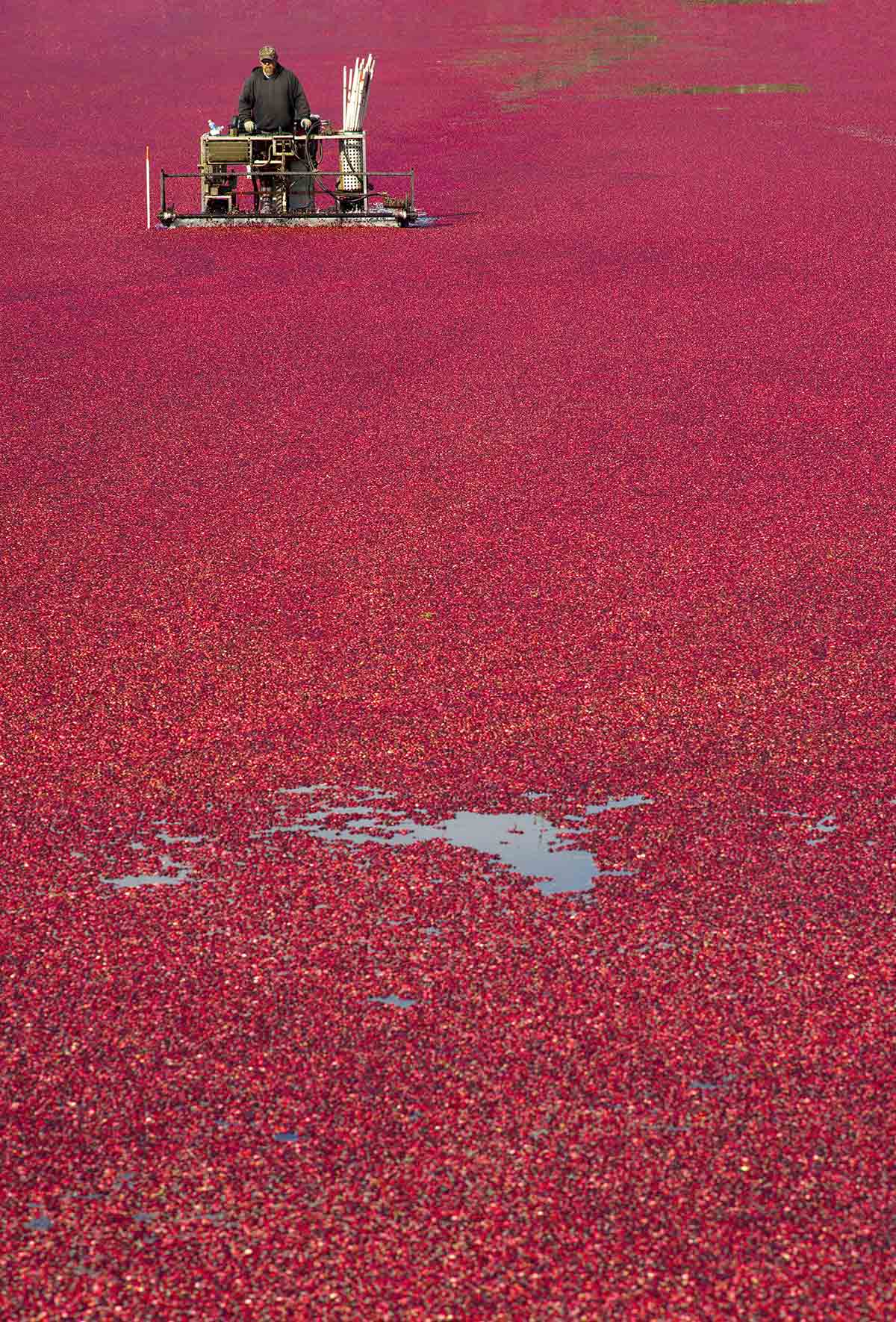 It’s time we lay our cards on the Thanksgiving table: many of us, truthfully, aren’t exactly in love with cranberries.

Every year Americans pass platters of turkey, bowls of vegetables, and boats of gravy, while gelatinous cylinders of cranberry sauce—their bellies banded with ridges from the cans in which they were entombed—sit untouched. Sometimes, in a gesture to the beleaguered cook, a brave few plop some homemade chutney onto plates mounded with mashed potatoes and stuffing. Then, as with turkey-shaped oven mitts, all traces of it disappear until the following year.

But if guests at the holiday table knew what went into growing the perfect scarlet berry, and if cooks understood the challenges of working with a fruit so sour it makes your jaw sing, the humble cranberry might just be looked upon as the noble autumnal fruit it is, right up there with quince, pomegranate, and persimmon.

Considered one of three commercially important fruits native to North America and unknown to European settlers (the others are blueberries and Concord grapes), cranberries were used by Native Americans as food, dye, and medicine long before they were co-opted by Thanksgiving advocates.

Because of Thanksgiving and the Pilgrims, Massachusetts will forever be associated with the cranberry, but it only produces approximately 25 percent of the nation’s crop. Wisconsin is responsible for the largest percentage, along with New Jersey, Oregon, Washington, Maine, Michigan, and Minnesota rounding out the roster.

To dry-harvest, Ms. DeGrenier said, a farmer drives a mechanical harvester that gently combs the berries from the vines and then trundles them up a conveyor belt and into a burlap bag. From there, the cranberries are sent to a separator, where they undergo the bounce test, a determination of quality. The better, or firmer, the berry, the further it bounces. 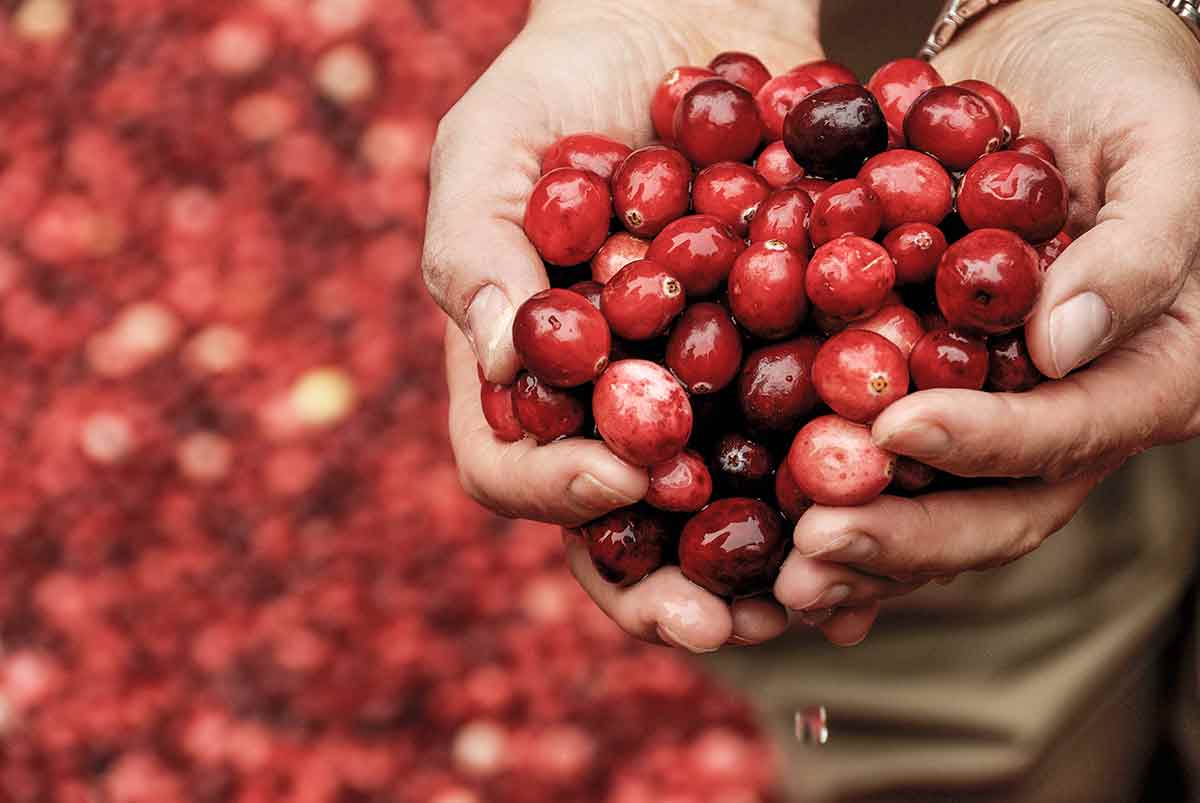 Of the three major varieties grown in Massachusetts, the indigenous heritage berries, Howes and Early Black, are the favored dry-harvest fruit for the few farms that use that method. “They’re heartier and can handle all that bouncing in the separator,” said Keith Mann, owner of Mann Farms, in Buzzards Bay, “plus, they get a really great crimson color,” the physical and cosmetic requirements for model holiday fruit.

While cranberries are top of mind for cooks in November, they are a never-ending proposition for farmers. Besides having to be tended in the growing season, as well as throughout harsh winters, the plants, especially those near the ocean, are susceptible to all kinds of problems. “A severe storm,” Ms. DeGrenier said, pointing south toward the nearby bay, “and the bogs can flood with salt water.” Whenever fertilizer or an herbicide is needed, or bins of dry-harvested berries have to be removed from the bogs, a helicopter is used, one of the few pieces of equipment that won’t trample the vines.

Knowing all this may give people a greater appreciation for this high-maintenance fruit, but it won’t necessarily tempt them to eat it. For that, it takes an understanding of cooking with one of the kitchen’s tartest ingredients.

So throughout the winter months, he serves port-poached cranberries with venison and matsutake mushrooms and as a warm sauce poured over sassafras-poached pears. Mr. Schlow partners fatty yellowtail sashimi with a jam made of cranberries, jalapeño peppers, honey, and orange. And one of Mr. Siegel’s favorite cold-weather dishes is a roasted magret of duck with a ragout of root vegetables studded with dried cranberries.

Yet if, even after all the tinkering, you still find your relish, sauce or compote too standoffish, here’s a last-ditch suggestion: use it as a dessert accompaniment served over, say, ice cream or pumpkin pie. The extra hit of sweetness might be enough to earn the cranberry a little affection this year. Originally published November 7, 2008. Kindly note that some businesses mentioned in this article may be temporarily closed due to the current circumstances.

Back to Thanksgiving Cranberries: The Table’s Sweet-Tart Must-Have on Leite's Culinaria