A perfect pie crust doesn’t always come naturally. It takes practice (yay!!) but it also helps when you have a recipe as perfect as this one. High-fat butter is the key here, darling.

Adapted from Melissa Clark | In the Kitchen with a Good Appetite | Hyperion, 2010

I decided to have a pre-Thanksgiving pie crust bake-off to see if, with the prep times and mess factor being equal, lard pastry really was the best when tasted side by side with my standby favorite all-butter crust. And while the kitchen was a floury mess anyway, why not come up with something definitive, the pie crust recipe I’d turn to Thanksgiving after Thanksgiving? I wanted a recipe that was simple enough to memorize and straightforward to prepare.

Flakiness and flavor were my priorities, and figuring out which fat would give the best of both was the goal. Before I started baking, I did some research, looking over the pie crust recipe canon. Most were a combination of shortening and butter, or all butter, so I started there. Then I baked and baked.

Not wanting to give up the flavor of butter entirely, I tested all the recipes using half butter, half animal fat, and also at a ratio of 70 percent butter to 30 percent other fat. I also made a few crusts using 100 percent high-fat European-style butter.

The high-fat European-style brand produced a markedly flakier, more tender, and puff pastry-like crust than those made with regular butter. The leaf lard crust was as gorgeous as I remembered, puffing up in the oven and crumbling deliciously when it was cut. That characteristic faint bacon nuance was still there. Not so with the processed lard pastry, with a flavor veering closer to rancid than bacon.–Melissa Clark

LC On the Sublimity of Lard Note

Thankfully, Melissa Clark tends to go far beyond the curiosity of most cooks, doing all the hard work so you don’t have to. You can experience the results of her experimentation in the perfect pie crust recipe below, using whichever proportion of fat you prefer. Do as you wish. We know which pie crust we’ll be having for Thanksgiving dessert.

Note, the recipe can easily be doubled for a double crust; divide the dough into two balls to form two discs before chilling. 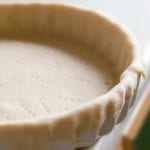 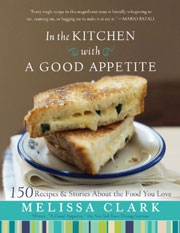 Not Just Butter Perfect Pie Crust You can experiment with different textures and flavors by substituting 3 to 4 tablespoons butter in the recipe above with any of the following fats: shortening, lard, beef suet, duck fat, or an unsweetened nut butter, such as hazelnut butter, almond butter or mixed nut butters. All should be well chilled before using.

Not being a frequent pie maker, I was hoping for a recipe for a single crust so I could make a fruit pie—something a bit more formal than a crumble or cobbler, and one that worked with butter since that’s the flavor I like best in pastry. This perfect pie crust recipe worked perfectly. It’s easy—super easy since I used the food processor to pulse the dough very briefly thanks to the drizzle feature of the food processor (my slightly mature Cusinart has drip holes in the bottom of the pusher, which are like that extra set of hands when you want to add liquid very slowly while mixing). I cut the butter up and put it in the freezer for about 10 minutes to make sure it was thoroughly chilled since I didn’t want it too heat up when mixing. I also took a tip from Jenni Field to roll out the dough before between 2 layers of parchment paper on a flat baking sheet before chilling it, avoiding my usual pitfall of using too much flour and toughening the dough while rolling it out. This pie crust could work wonderfully as a single bottom or top crust. For a bottom crust, you could blind bake it. I used it on top of blueberries, and since it wasn’t a sweetened pastry, I could control the amount of sugar completely, which I did with a brush of milk and then a sprinkle of colored decorating sugar. For a savory finish you might just do an egg wash. My pie baked for a bit over an hour at 375℉ till the filling was bubbling and the crust had a lovely color. You could probably get there sooner with 400℉ if that worked with your filling. Not only was this recipe a good problem solver for my modest pie, it was delicious AND it passed the second-day test—still rich and flavorful and the texture did not go soggy. I used Kerrygold lightly salted butter and omitted the salt in the recipe. Thanks from this pastry-shy cook!