This Portuguese fish chowder is a tomato-based combo of stew and soup and chowder made of fish, potatoes, chorizo, also known as chouriço, and peppers that’s a time-honored classic in Portugal.

This Portuguese fish chowder is sorta like a blending of the best characteristics of chowder, stew, and soup. So you can embrace your creamy chowders all you want. But this aromatic amalgam of sausage, potatoes, and fish may convince you otherwise. So don’t be so certain that you don’t prefer tomato-y chowders until you try it.–Renee Schettler Rossi 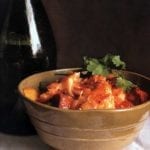 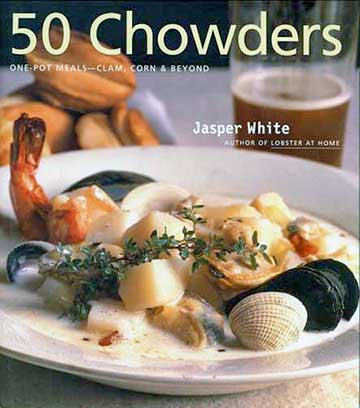 This recipe makes a delicious, flavorful fish chowder and is pretty much a complete meal in a bowl (very “trendy” these days!) The starch from the potatoes adds a luscious creaminess to the broth and the dish cries out to be eaten with a spoon so that you get a little bit of everything, including the broth, in each mouthful.

The potatoes took 6 to 8 minutes. Overcooking them will make them fall apart. My potatoes were fully cooked at the end and held their shape perfectly.

Reheated leftovers are very tasty, but should be consumed within 1 to 2 days.

This is comforting and soothing, very straightforward, and easy to do in advance. Great midweek tasty dinner.

I thought the allspice could have been increased in this. That’s personal taste, of course, but I could have doubled it at least.

I used Albert Bartlett Rooster potatoes. The timings for the potatoes are crucial. It was lovely to end up with tender potatoes still holding their shape, having absorbed all the delicious flavors. I served it with crusty bread. Though it really didn’t need any more carbohydrates with it, but was nice to mop up the juices at the end.

This actually only served 4 people for us, not 8. We were hungry! We had bread at the end to mop up the juices.

I left it standing for about an hour and when it was time to eat, I gently reheated it. This worked very well.

I happened to be on vacation in Portugal when I saw this recipe! Even more coincidentally, I had eaten a version of this dish the previous evening. I was very excited to now have a recipe to recreate at home.

I used cod to make this, finding wild-caught frozen fillets at my local grocery store. I did all of the prepping of the ingredients before getting going, as the cooking process is pretty fast. That made it easy to pull together.

The inclusion of the chorizo sausage really kicks up the spice level and blends well with the cod. The broth is really flavorful and the potatoes perfectly tender.

We really enjoyed this for dinner, serving some crusty bread along side to mop up some of the delicious broth.