This Portuguese bread soup with shrimp, or açorda de mariscos, is a satiating meal made from shrimp, sausage, tomatoes, onions, and Portuguese cornbread.

Lisbon’s açorda, or bread soup, is made with fresh seafood—usually prawns (large shrimp)—and tends to have a risotto-like texture. Although city folk traditionally prefer the elegance of white bread, cornbread makes a particularly good seafood açorda, as the sweetness of the crumbled cornbread works well with crustaceans.–Elisabeth Luard

Is this actually soup?

We’re sitting here studying this recipe and wondering how this hearty seeming dish came to be known as soup. Regardless, though, the taste tends to elicit the same response as its satiating texture and its stunning appearance. And that response? Wowsa! 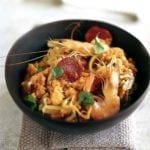 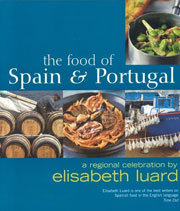 In choosing to make this Portuguese bread soup with shrimp, I was looking for a hearty comfort dish that could be served on a chilly day and this dish did not disappoint me in the least. I decided to go even further with the authenticity of the dish by making a Portuguese corn bread called broa. This not only added to the flavor of the dish but held up really well to the liquid and length of time needed to cook the dish.

The elements of the dish worked very well together from the sautéed leeks and a slight smoky hint from the chorizo paired with the bread which did not have any grainy element to it, which from time to time may happen with cornbread based items. Add the shrimp to that and you have a meal that will not only come across as fulfilling but also deliciously savory that reminds you of dunking bread pieces in your grandmothers gravy. I would absolutely make this again and will recommend it to my friends.

I’m familiar with the Portuguese bread soup called açorda and it’s a lovely soup with brothy bread slices flavoured with mint and poached egg or fish and seafood. I’ve never actually made it before, but each time I enjoyed it, it felt like the comfort of chicken soup or avgolemono. It was a light soup despite the bread.

When I saw this recipe, it reminded me more of a paella made with bread instead of rice. Naturally, I was intrigued. I also happened to have the Portuguese corn bread, broa. While the broa soaked, I prepared my onions in one pan and the tomatoes in another. The recipe seemed to have extra steps when I first read it but the flow actually worked. Squeezing the water out of the soaked bread and stirring to prevent the bread from sticking to the bottom of the pot were meditative activities with the added bonus of aromatherapy.

Absolutely, I used the anchovies! And the pat of butter! This last indulgence didn’t produce a noticeable change in the flavor or texture as I tasted before and after the butter and the soup richness remained the same. My soup was actually soupy but this might have been because I didn’t reduce my broth enough before adding the shrimp and chouriço. I cooked these for the requested 20 minutes to allow the flavors to meld but I found both the shrimp and chouriço were a bit overdone. Next time I will reduce the broth with all the flavorings and meld with the bread, then adding the proteins just for the last 10 minutes of cooking.

Each spoonful was an exciting mouthful of hearty comfort! This one is going on my list of “bowl food /soul food”! Just add a spoon and a glass of red and call it dinner.