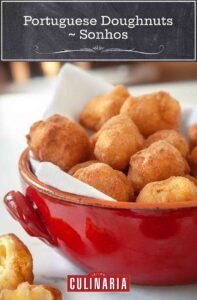 Sonhos are orbs of fried dough that are similar to choux pastry or cream puffs yet easier to make. Crisp outside, airy inside, and with the perfect sweetness from a quick roll through cinnamon sugar. A Portuguese classic.

There are countless variations on the sonhos theme all over Portugal. Generally speaking, these fried cakes that are airier than doughnuts are intended for Christmas time, although being so popular, they’re commonly made at other times as well, and some specialty patisseries sell them freshly made on a daily basis—with lines down the block.–David Leite 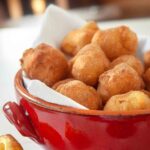 Sonhos are orbs of fried dough that are similar to choux pastry or cream puffs yet easier to make. Crisp outside, airy inside, and with the perfect sweetness from a quick roll through cinnamon sugar. A Portuguese classic.
Prep 25 mins
Cook 35 mins
Total 1 hr
Dessert
Portuguese
24 servings
178 kcal
5 / 5 votes
Print Recipe

For the sonhos batter

These donuts were a huge hit! I had 2 teenagers taste test them while they were hot and fresh and they were in heaven! I’m hesitant to call them donuts as they’re not doughy at all. They are extremely light—like crisp cream puffs!

The recipe was surprisingly easy and quite a bit of fun to make, especially the frying process. I’m typically not a fan of fried foods, but these were so entertaining. The real show starts about 2 minutes into the cooking process as they spin, grow, crack, and puff up and just when you think they’re almost done, they dance a little more! You really only need very small balls of dough. They puff up so much!

The consistency was not at all cakey. It was like a cream puff—very light and big shiny holes. The edges were very crisp and yes, they had tapered little points. I tried them hot and fresh and they had a distinct eggy taste. I tried them later in the day (maybe 5 hours later) and they were still crisp and delicious but much milder and not “eggy” at all. I do not think these would be good the next day. They are definitely a “serve the same day” kinda thing.

I’m a purist and loved them just as-is with cinnamon sugar but my husband added some cherry jam to his and he loved them. I would definitely make them again.

The dough preparation for these sonhos is reminiscent of making choux pastry, which is something I stayed away from in the past because I was under the impression it’s difficult. And while this recipe is a little more involved than a basic dough, it’s definitely still possible for a beginner.

The dough began sticky but as I stirred but it tightened up until it became a fairly firm ball. There was a good deal of residual dough left on the sides and bottom of the pan and, after about a minute, this turned white as the dough continued to cook.

I actually made this recipe 3 times and believe that the difficulties I ran into were all because I didn’t cook the initial dough mixture long enough. Undercooking at this point virtually ensures that the dough isn’t smooth because the eggs won’t combine into the flour mixture, no matter how long or hard you beat it. By the third test, my timing was still a little short but I found that the eggs and dough mostly combined.

I found the deep frying to be the easiest part of the recipe and the timing was accurate. They fried quickly and easily, and I much preferred the “free form” shape of these doughnuts because of all the extra crunchy bits. They weren’t gooey on the inside and were still a nice golden brown on the outside.

I added Saigon cinnamon to my sugar in nearly a 1:1 ration but this is because we are big fans of cinnamon. I made one rolled in just sugar and it was alright but we all definitely preferred the cinnamon version. The final sonhos were fluffier and lighter and quickly devoured.

Overall, it’s a simple enough recipe with a lovely result. I mean, they are really delicious when they are warm and still a little crisp, but the whole thing depends on the integration of the fully cooked flour and butter mixture. I can’t emphasize enough the beating as the one thing that will make or break these lovely little cinnamon dreams.

These absolutely didn’t even last long enough to be eaten cold.

These little gems won’t disappoint because they are delicious!!!! The sonhos were light in texture on the inside with a light crunch on the outside. The flavor was perfect.

Take your time and stir well after adding the flour to your water. A little later, the eggs will also take a few minutes to incorporate, so patience is a virtue at this point as well.

Frying the sonhos was very easy and not messy at all. You’re frying at a lower temperature so you won’t have the splattering like you do with fried chicken or something like that. I cooked the sonhos for 8 minutes and it was the perfect amount of time. These don’t absorb grease and they were light on the inside and a nice light crunch on the outside.

I did use a Dutch oven to fry these in as I didn’t think my saucepans were deep enough. This worked out fine and it did allow me to cook a few more at one time but you do need to be really careful about not overcrowding. The size they go in as is not the size they come out These puff up and nearly triple in size during frying.

My family and I really enjoyed these and there’s no way you can eat just one.

These little Portuguese doughnuts are light and airy. In fact, it would be easy to eat several and not realize you had done so until there were no more on the plate. They are quick to make and the only sweetness comes from the sugar on top. But be prepared to finish them shortly after you make them because when they’re hot is when they’re at their best.

The dough quickly became very stiff and difficult to stir as it formed a tight ball. I reduced the heat to medium and continued stirring with difficulty until there was a thin layer of white that formed on the bottom of the pan.

I then added the eggs, 1 at a time, beating with a stand mixer for about 1 1/2 minutes between each egg, and scraping my mixing bowl before adding the next egg. I then beat for 2 minutes after all eggs had been added.

I dropped tablespoons of the dough into the oil (the dough was too soft to form it) and watched as they quickly puffed up and bobbed around. Because I dropped the dough in rather than shaped it, they looked like very fat little elephants. I cooked each batch until uniformly golden brown.

I dusted half the batch with just sugar and the other half with a mixture of sugar and cinnamon. Both were delicious.

The doughnuts were crisp on the outside and light and airy on the inside, somewhat like a choux pastry but with a little more substance. It was easy to eat 3 of these little puffed elephants.

These needed to be eaten in a short period of time. After initially trying them, I left them for a couple of hours. When we came back to them they had lost some of their crispness and the insides seemed heavier. But they were delicious when first made.

The finished product was quite good—light and fluffy with just the right amount of egg flavor. The perfect canvas for the cinnamon sugar, honey and/or jam. We loved the individuality of each doughnut and the crispy tentacles that came from dropping the dough into the hot oil. The ones we ate later lost their crisp but were still quite delicious.

I was never able to get the dough “completely smooth,” even after all the eggs were in. I grabbed my whisk and tried that for a while but that didn’t work either. Fortunately, when the doughnuts came out of the fryer, you couldn’t tell the dough was lumpy. But I wondered if the doughnuts should have been puffier.

I felt that 300°F to cook the dough was a little low. I did the first batch at 300°F and it took a good 10 minutes to get lightly golden brown. I turned it up to 325°F for the next batch and that seemed to work okay. I never did get a deep golden color on my sonhos as in the picture.