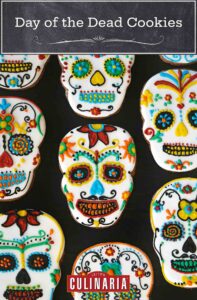 Day of the Dead cookies are a sweet day-after-Halloween tradition in Mexico made to celebrate the dead. This version, with its colorful decorations, has the kick of chipotle and the warmth of cinnamon. Here’s how to make and decorate these sugar skull cookies.

“Without an ounce of hesitation, I can honestly state that experiencing Dia de los Muertos—Day of the Dead, a day to remember family and loved ones who have died—in Oaxaca, Mexico, is one of my life’s highlights,” says author Matt Lewis.

That experience prompted the creation of these spooky yet spectacular skull sugar cookies, also known as Day of the Dead cookies.

“It was the purest form of celebration, lacking sarcasm, crass marketing, and all the other things that make celebrations stateside decidedly impure. It was an intense, beautiful, Technicolor experience. It was—forgive my childlike exuberance here—epic.”

While we love what author and recipe creator Lewis has to say about celebrating Dia de los Muertos, we love these cinnamon chipotle chocolate cookies even more.–David Leite

In this context, “flood” simply means to cover the surface of the cookie or cake or whatever with icing. If you feel confident and steady, you can flood each cookie just by using a pastry bag filled with the icing.

I recommend using less icing in the flooding process than you imagine you will need, as it should spread to the outline and fill in the surface of the cookie on its own.
If you’re not quite confident using just the pastry bag, or if you want to be extra careful, squeeze a few dollops of icing over the top of the cookie and use a clean, dry paintbrush or the back of a spoon to gently spread it to the outline. We don’t recommend pastry brushes; craft-store paintbrushes with synthetic bristles work best.

Yes. This Mexican sugar cookie dough can be made up to 3 days in advance and kept tightly wrapped in the refrigerator.

If I want these cookies for Halloween and Day of the Dead, when should I start making them?

Whether you’re celebrating Halloween or the Day of the Dead, it’s best to break up the making of the recipe over a couple of days.

On day one, make and bake the cookie dough and also make and apply the filler icing to the cooled cookies. Allow the cookies to sit out overnight, as the filler icing needs to dry for at least 8 hours. Then, on day two, add the decorations with the other icing.

And just to reiterate what the author said, if you don’t like decorating cookies, you don’t need to do much to them. But if you do like to add an occasional flourish to your sweets, this recipe is a blank canvas just begging for you to do your magic. 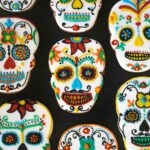 These dia de los muertos cookies are a sweet day-after-Halloween tradition in Mexico made to celebrate and honor the dead. This version has the kick of chipotle and the warmth of cinnamon. Here's how to make and decorate them.
Prep 15 mins
Cook 15 mins
Total 30 mins
Dessert
Mexican
12 skull cookies
535 kcal
4.45 / 9 votes
Print Recipe 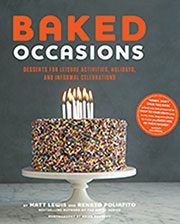 For the flooding icing

For the decorating icing

Make the flooding icing and prep the cookies for decorating

The subtle blend of cinnamon, chipotle, and chocolate in these sugar skull cookies is so good, like a great cup of Aztec hot chocolate, that I almost hesitate to recommend decorating them. I was worried that the icing would detract from the beautiful flavors beneath, but they hang in there. So if you have the slightest inclination to frost them, go for it!

Back to the Mexican sugar cookie recipe. The lovely thing about the combination of chile and chocolate is how it gives the chocolate some backbone. The cinnamon rounds that out. The only adjustment I would make to the recipe is maybe adding either a bit more chipotle chile powder or adding some ancho chile powder in addition to the chipotle.

I used Guittard 63% Extra Dark Chocolate Chips. I put 1/4 inch thickness bands on my rolling pin and the sugar cookie dough rolled out easily. I made a variety of shapes using large skulls, smaller skulls, bats, and pumpkins.

You can find skull cookie cutters in the cake and cookie area of many stores. In fact, when I asked for them at a Mexican grocery store, they had no idea what I was asking for, although I think the right ethnic source will have these without crossing the border. I found elaborate skull cutters so ornate that I almost didn’t want to cover the detail with the icing. I also found a slightly plainer skull as part of a Halloween set on sale.

Some cinnamon, chipotle, and chocolate cookies got Day of the Dead decorations, others were more weirdly spooky.

Usually when someone says “Icing” and “decorating tip #432,” I run the other way, but once in a while you must step up to the plate, try to relax, and get your game face on.

The good part of these step-by-step icing recipe instructions is that you discover the paddle attachment on your mixer is your new best friend. It does a better job of making icing with egg whites than I ever could have expected.

There was a subtle difference between the icing recipes—the first one had cream of tarter and more egg white and a bit more sugar, but wasn’t that different from the second one, which was used to color and decorate.

In fact, I think the first one flowed better and would have been easier to use in fine lines. I had quite a lot of icing left over, needing only half for the cookies. I used piping bottles instead of pastry bags since they often are my nemesis, and I regretted not having that extra icing when I divided my decor batch for coloring and found without enough volume the smaller piping bottles were a challenge.

I can see where the small zip-locs might have worked better if I had been more confident, and it would be faster, thus the icing wouldn’t start to set up and have to be stirred. Last resort—a drop or two of glycerin helped.

The piping sets up quickly, but when I realized my artwork was going to be more rustic, I was glad I had picked up a jar of candy eyes on clearance at Williams-Sonoma and used them to a somewhat less skeletal effect, but hopefully they will get a laugh.

When I couldn’t get more colored icing to flow because the bottles and pens couldn’t cope with smaller amounts, I turned to sparkle. I had dusting (powdery) sparkle that can either be used with a dry brush or wet, and I gave some of the skulls a little makeup lesson, and the bats got pink sparkle inside their ears.