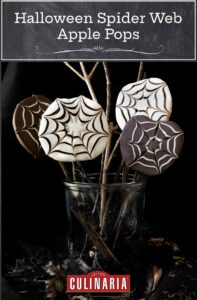 Apple spider web pops are a sweet snack that’s still healthy on the inside. A little bit of chocolate tempered with the sweet tang of SweeTango® apples…everybody wins. This is a sponsored post.

When I was a kid–yes, a millennia ago–apples were the orphans of the trick-or-treat bag. They were the overlooked and last eaten. Only after we had traded Bit-O-Honeys for Snickers, Necco wafers for M&Ms, and Mary Janes for Swedish Fish would we turn to the apples, alone after having rolled on the coffee table.

How we got these apples every October 31st was the same. Our little huddle of kids in Frankenstein, mummy, and werewolf costumes would titter with delight and satisfaction when a door opened and a kindly old woman would scream and tremble in mock terror at our costumes. Being somewhat of the plump persuasion even then, I’d shoulder my way to the front of the group, trick-or-treat bag open, waiting. Old women were to Halloween what winning slot machines were to Vegas: noisy and very generous.

But there was the occasional exception–usually a retired school nurse or dental hygenist. With her, our murmurs of delight would turn into groans as she thunked apple upon apple into our bags. We’d turn away and slump down the walk toward what we prayed was a bowl the size of our heads filled with a cache of cheap supermarket candy at the next house. Our mothers, ever protective and polite–it was the 60s, after all–would shout in unison from the sidewalk, “Aren’t you forgetting something?”–the glowing ends of their cigarettes jabbing repeatedly, like little analog laser pointers, in the direction of the clearly crestfallen woman.

“Thank you, Mrs. [insert name],” we’d singsong. Revived, the old woman would wave and close her door, ready to disappoint the next gaggle of monsters.

Besides the fact that we associated apples with the evil witch in Snow White, most of us shuddered at the idea of Halloween apples because they were always blah and mealy. Maybe Halloween apples wouldn’t have had such a bad rap when I was a kid, if SweeTango® were around back then.

WHAT IS A SWEETANGO® APPLE?

SweeTango® is the product of a beautiful apple marriage. It’s the crossbreeding between the Honeycrisp and the Zestar, which created the Minneiska–the science-y name of SweeTango®. It all began with a tree that was grafted all the way back in 1988. The apples were made available in 2007, looooong after I stopped trick-or-treating.

SweeTango® apples have a sweet bite with whispers of honey, citrus, and a wee bit of cinnamon. The flavor is nuanced, with a sweetness hitting your mouth first, then the roundness of honey, and last the citrus–for me it’s lemon–which lingers. Let me put it this way, these apples are so freakingly good, I had to replace that beauty above three times because I kept eating them.

As to crunch, these little guys win the top prize. They’re supremely crispy with a satisfying crunch. None of the mealy mouthfuls I’d been getting lately. And not just crunchy but juicy-crunchy. Like, laugh-out-loud-cuz-juice-is-running-down-your-chin crunchy. And it’s that firmness and flavor that makes them perfect for these Halloween apple pops. Those mealy, lackluster apples of my wunderkind years 1.) wouldn’t hold up to all the dunking and poking and eating, and 2.) could never offer the taste that holds its own against white and dark chocolate.

WHEN AND WHERE CAN I FIND SWEETANGO® APPLES?

SweeTango® apples have limited availability–September 1 to February 28. So start shopping and munching now. To find a list of stores near you that sell SweeTango® apples, use this handy dandy apple locator. Think of it as your Apple GPS. You can also Follow SweeTango® Apples on Facebook, Twitter, Pinterest, and Instagram for the most up-to-date information. 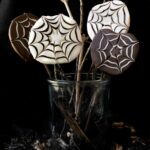 Apple spider web pops, made with SweeTango® apples, are a simple way to get your kids into the Halloween spirit. Easy enough for them to make, with a little help, these treats come together quickly and look amazing even without a lot of decorating skills. They're the perfect treat for a Halloween party, trick-or-treating, or munching when no one is looking. Oh, did we mention that they taste great, too?
David Leite
Prep 10 mins
Cook 3 mins
Total 30 mins
Dessert
American
8 apple pops
152 kcal
5 / 3 votes
Print Recipe

When added to the chocolate that coats these apple pops, it helps the chocolate melt better and more smoothly, giving it a better texture. If coconut allergies are a problem, it can be replaced with mild vegetable oil. You can also omit the oil altogether. Just be aware that without it your coating probably won’t be as smooth or dip as easily.

These apple spider web pops bathed in chocolate are delicious! It’s a perfect way for eating apples. And an additional plus is it was very easy putting them together. As a beginner I had a couple of flaws but nothing I couldn’t fix on the road. The tartness of the apples matched perfectly with the sweetness of the chocolate.

These apple spider web pops are a fun treat for kiddos of all ages. Slightly more healthy than your average treat but still a little decadent. What I like about this is it is pretty quick to make and the size is just right for little ones. I did find it took a long time for the chocolate coating to set and after putting it into the fridge it did spread a bit.

What my tasters loved was the contrast between the sweetness of the chocolate and the tart taste of the apple. They also appreciated the fact that it was semi-sweet chocolate that was used as milk chocolate would have made it too sweet. My only recommendation would be to use a thinner stick as the thick ones don’t go into the apple nicely and to use nicely rounded apples for this. It makes them look nice and it’s easier to get even slices. By the way, my grandkids and their grandfather went back for seconds.

One taster said that next time we could try the chocolate chips that are flavored like caramel or peanut butter for those who don’t like white chocolate. The instructions overall were very easy to understand.