This pumpkin spice toffee is made with pecans, sugar, butter, white chocolate, pumpkin pie spice, and lotsa love. An easy yet impressive food gift that’ll have people clamoring for more.

Cookbook author and candy sorceress Sally McKenney openly asserts in her book Sally’s Candy Addiction that she’s part of the pumpkin spice craze that commences sometime in September and doesn’t stop until Christmas. Even though there’s no actual pumpkin in this pumpkin spice toffee, you still get a hit of that familiar autumnal pumpkin spice flavor. And there’s nothing wrong with that.–Renee Schettler Rossi

Remember back in the ’90s when seemingly half the population had slapped bumper stickers that read “Random Acts Of Kindness” on their beat-up Volkswagons? We think of those bumper stickers—and the underlying sentiment—whenever we make this pumpkin spice toffee. The thought process starts with what a lovely gift this pumpkin spice toffee would make. That leads us to make a mental note to stir together an extra batch for our friends and neighbors next chance we get. Then we start thinking how the toffee never fails to put us in a lovely mood. That leads us to spend a considerable amount of time pondering whether the toffee has the same effect on others? Which gets us thinking that perhaps we should test this theory. And that leads us to imagining what it would be like to gift batches of this toffee to the elderly little lady three houses down who likes to chat, the homeless guy asking for change just outside the grocery store, the twenty-something standing too close to the curb who just got splashed head to toe by a taxi careening through a rain puddle, and, you know, others who could use some random acts of kindness. Anyways, that’s what we think when we make this toffee. What do you think when you make this toffee? Let us know in a comment below. 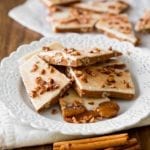 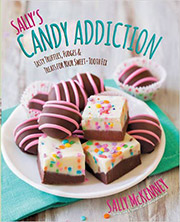 This pumpkin spice toffee is a wonderful variation on classic toffee. I love the warm spicy taste of fall. I set this out while we were watching football. Disappeared in a flash.

This recipe came together much more quickly than I anticipated. I had a fresh jar of King Arthur pumpkin pie spice, so that’s what I used. I chopped my chocolate and mixed the cinnamon sugar for the topping while the syrup cooked. I made a second batch and added 1 teaspoon baking soda with the spice and pecans, as I do with my regular toffee, and I thought it produced a more tender bite in the finished product.

Will be a definite part of my Christmas candy this year.

I could not stop snacking on this pumpkin spice toffee! Everything went very smoothly until I poured the butter and sugar mixture on my pan. It was very thin and there was melted butter around the edges. I wasn’t sure if the toffee was going to set. I continued with the recipe as written, thinking that it had failed. Once I pulled the toffee out of the fridge, though, it had set! It was a miracle!

This is a sticky, soft toffee and has a nice pumpkin spice note. My husband really liked that the pumpkin spice was subtle. I made sure to have every ingredient measured and every tool that I needed ready before starting so that I would have everything ready during the heating process. That certainly helped.

I did have some issue with my Nestle white chocolate chips not melting at all after waiting for 5 minutes. I popped the tray into a warm oven to try to get them to melt. When I went to smooth them with a spoon, they pulled up from the toffee. I’ve read that many chips are formulated with stabilizers to retain their “chip shape.” Perhaps that was my issue? I ended up leaving them as chips and sprinkling the nuts on top. I used a fraction of the cinnamon sugar sprinkle at the end given how sweet the toffee is already.

Moreish. A divine candy. I will be making these again and again.

This concise method is a treat just in time for the holiday madness. The pecans, cinnamon, and spice welcome autumn. I may add 1/2 teaspoon more pumpkin pie spice next time. This could be made interchangeably with dark instead of white chocolate and different spices or nuts, but I love the flavor profile as is.

Toffee and candies can be very temperamental. If all mise en place is ready prepared,, it is actually pretty quick and easy. Be sure to have a squeaky clean heavy-bottomed pot with even heat distribution (copper is excellent). Your pastry brush should be thoroughly clean as foreign objects can cause crystallization. Use sugar from a fresh unopened bag. Do not have too much temperature variation in your kitchen space. Add the white chocolate when the toffee is just set, about 3 minutes after pouring, and wait until cooled slightly before placing in refrigerator. Be prepared to share the recipe!