This maple syrup snow lets you embrace your latent Little House on the Prairie fantasies with a quaint, toffee-like candy made by drizzling maple syrup onto fresh snow. Its provenance may be outdated, but its appeal transcends time.

Maple syrup snow is a charming old-fashioned candy that’s sorta akin to homemade caramel. And it’s gooey and sweet enough to get excited each time it snows. It’s also a compelling reason to always keep a stash of maple syrup and butter on hand. –Renee Schettler Rossi

Where Did Maple Syrup Snow Originate?

We’ve no idea when exactly the tradition of maple syrup snow began. But we do that know author Diane Henry first read about it in Laura Ingalls Wilder’s Little House in the Big Woods, which is in the Little House on the Prairie series. As Henry explains, Native Americans used to watch for the “sugar moon,” the first sign that the sap was running and that it was time to tap the trees, in February. [Editor’s Note: We don’t know what a “sugar moon” is, either. But we find it unspeakably comforting to know that there’s such a thing watching over us. Something for you to ponder as you snitch some maple syrup snow.] 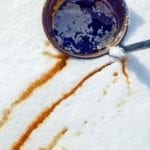 This maple syrup snow lets you embrace your latent Little House on the Prairie fantasies with a quaint, toffee-like candy made by drizzling maple syrup onto fresh snow. Its provenance may be outdated, but its appeal transcends time.
Prep 35 mins
Cook 10 mins
Total 45 mins
Dessert
New England
40 servings
67 kcal
5 from 1 vote
Print Recipe 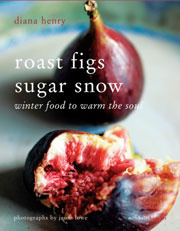 This maple syrup snow candy was so yummy! The maple mixture creates a gooey caramel or toffee on top of snow. It makes quite a bit, so I called my neighbors to bring over a bowl of snow and it was so cute, they sent their 9 year old over with this big mixing bowl full of snow, so I just poured it on. (I wish you could have seen the neighbor boy with his boots and gloves on and this big bowl of snow. Very cute!)

They all loved it and described it as “a really good caramel.” The mom and dad finished their dessert off with a glass of Bailey’s. I jarred the leftovers, which will make a great caramel ice cream topping when the snow is gone–or maybe I’ll drizzle some over the whipped cream on my latte.