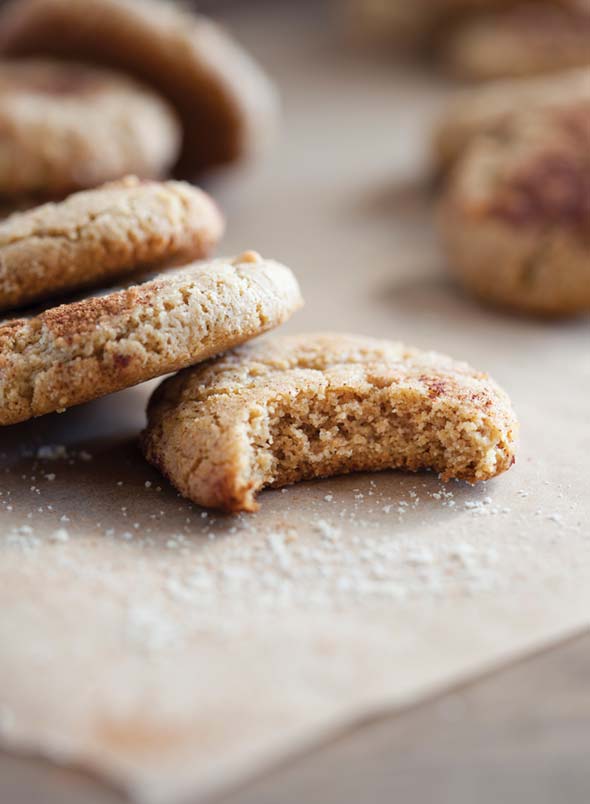 Thanks to this paleo snickerdoodles recipe, even those who are gluten-free and paleo-minded can have their snickerdoodles and eat them, too. This recipe makes soft, chewy, sugary, and cinnamon-y cookies that resemble the classic snickerdoodle. Although given the requisite absence of granulated sugar and flour and the subsequent inclusion of maple sugar and alternative flours, this recipe isn’t going to taste exactly like the classic. It actually takes on something of a sophisticated slant. Kindly adjust your expectations accordingly.–Renee Schettler Rossi 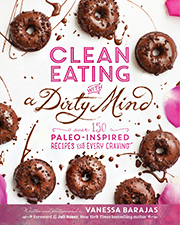 For the paleo snickerdoodles
Dump the butter in a medium saucepan over medium-low heat and let it warm, stirring every once in a while, until it starts to bubble and foam. As the butter continues to warm, it will turn from lemon yellow to amber in color and will go from a loud bubble to a quiet simmer. Eventually, brown specks will have formed at the bottom of the pan, and some of the specks will start to rise in the foam, and the butter will take on a pleasing nutty aroma. When this happens, remove the pan from the heat and let the browned butter cool for 15 to 20 minutes.
Meanwhile, in a large bowl, toss together the flours, baking soda, cream of tartar, cinnamon, and salt with a fork until well combined.
Put the maple sugar in the bowl of a stand mixer or in a large bowl and, once the browned butter has cooled, pour it into the maple sugar, scraping in the browned bits from the pan. Beat with a stand mixer or a hand mixer on low speed until combined, about 1 minute. Add the eggs, 1 at a time, mixing well after each addition. Add the vanilla, increase the speed to high, and continue to beat until smooth bubbles appear on the surface of the mixture, figure about 1 minute or so.
Scrape the browned butter mixture into the flour mixture and beat on low speed until thoroughly combined, scraping the sides of the bowl. Cover the cookie dough with plastic wrap, pressing it directly against the surface of the dough, and stash the bowl in the freezer for 1 hour. (It’s okay, go ahead, snitch some of the dough. We know you want to.)
Adjust an oven rack to the middle position and preheat the oven to 350°F (180°C). Line 3 baking sheets with parchment paper. (If you have only 1 or 2 baking sheets, that’s cool, just be certain to allow the sheets to cool completely between batches. You’ll also need to keep the remaining cookie dough in the fridge between batches.)
For the cinnamon sugar coating
Grab a small, shallow bowl and toss together the maple sugar and cinnamon. You want them to be really thoroughly combined.
Once the dough is chilled, take it out of the fridge, pinch off about 1 tablespoon, and roll it between your palms to form a 1-inch (2 1/2-centimeter) ball. Lightly roll the ball in the cinnamon sugar, turning to coat all sides. Place the cookie dough on the prepared baking sheet and repeat with the remaining ingredients, spacing the cookies about 2 inches (5 centimeters) apart. You’ll probably be able to fit 9 to 12 cookies on a baking sheet.
Bake the cookies, 1 baking sheet at a time, until the edges of the cookies are lightly browned, 11 to 12 minutes. When you remove the cookies from the oven, slide the parchment paper and cookies from the baking sheet to a wire rack and let the cookies cool. The cookies can be covered and kept at room temperature for up to 3 days.
Print Recipe

A delicious paleo snickerdoodle cookie from an incredibly simple, straightforward recipe. The entire recipe is really easy to pull together with a nice crumb and lots of flavor. The most difficult part is browning the butter. The only thing missing was that nice bit of crunch on the top of the cookie that you normally find in a snickerdoodle. I think that would be easily remedied by adding some raw sugar to the maple sugar in the last step before baking. To cut down on a step and save a bowl, I'd also recommend mixing the sugar and cinnamon in the same bowl before rolling. I used a #40 scoop for the dough and had 30 cookies. I baked the cookies for 12 minutes, rotating the tray halfway through, until the edges were lightly browned. Afterwards I realized the cookies could've used another 2 minutes in the oven.

This paleo snickerdoodles recipe makes a very good cookie with a wonderful, unusual, crumbly texture. The browned butter taste and scent is heavenly. All tasters loved this cookie. Be aware that maple sugar is pricey, although it is absolutely delicious and a worthy investment if you like to experiment with treats sweetened with alternatives to refined sugar. The only quibble was in the name. This is reminiscent of a snickerdoodle, but not—this is a different cookie. We thought "Browned Butter Cinnamon Cookie" would work.

The flavor of this paleo snickerdoodle cookie is good. You can taste the nuttiness. The cinnamon flavor is nice. The maple sugar isn't evident—these cookies don't have a huge maple flavor even though there's a lot of it. You can probably get more of a flavor boost by adding more vanilla or rolling with more cinnamon. The flavor is slightly different than the classic snickerdoodle. We've been having this discussion at work about titles because some people expect things to be exactly as they are named. I think that healthy versions may be just creative interpretations, and as long as they taste good, are okay. Gluten-free baking is so sensitive that sometimes it's hard to taste exactly like the original.