These pork chops with peppers, vinegar, and black olives is an elegant and impressive main dish made with brined pork chops that are smothered in a spicy onion and pepper mixture, and finished with a white wine, vinegar, and olive sauce.

Smothered with sweet red peppers, tangy vinegar, and earthy black olives, this dish offers a satisfying intensity of flavors that nearly jumps off the plate yet it’s a dish that’s simple to prepare.–Stanley, Evan, Mark and David Lobel

This recipe allows you to choose whether to brine the chops or not. As usual, read the entire recipe carefully before beginning. 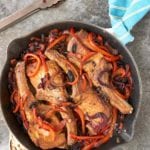 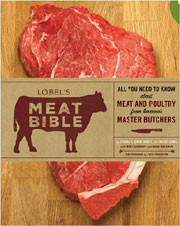 For the brine (optional)

For the pork chops

Brines can be flavored with any number of herbs, spices and other aromatics. A bunch of sage, a few bay leaves, a head of crushed garlic cloves, and a tablespoon or so of peppercorns makes a fine addition to the Italian-style Pork Chops with Peppers, Vinegar, and Black Olives. Exact quantities are not too crucial; be generous but not excessive when flavoring brines with herbs and spices — you want to flavor but not obscure the natural taste of the meat.

We thought these pork chops were superb. The vinegar nicely balanced the rendered pork fat in the sauce and the slightly caramelized peppers and onion—the combo never fails—added a wonderful layer to the whole dish, flavorwise and visually.

Although it’s optional, I highly recommend brining the pork, which ensures that the chops will be juicy and flavored through and through. I didn’t add any herbs to the brine—I think the strongly flavored sauce would have masked the delicate aroma. My rib chops were 1 1/4 inches thick and they were close to room temperature before dredging in the flour. I cooked them for 5 minutes on the first side, 4 minutes on the other side, and then 6 minutes after putting them back in the skillet and they couldn’t have been cooked more perfectly.

As the rib chops were pretty substantial, I served them with roasted asparagus instead of a starchy side dish. It may be unnecessary to add salt. Kalamata olives and anchovies have plenty of salt, and one can always adjust the sauce before serving. I didn’t “pre-chop” the anchovies as they easily dissolve in the sauce.

I loved this dish! A little salty and briny from the anchovies and olives, a little (or a lot) spicy, and silken with sauteed red peppers, all pulled together with a delicious wine and vinegar sauce. I’m looking forward to making this again!

My pork chops were 1 inch thick and I used Chardonnay wine. I followed the recipe as presented and ended up with fabulous, tender pork chops complemented by all the other ingredients.

A fantastic recipe for tender, juicy pork chops, and I didn’t even brine them! We couldn’t believe how tender and flavorful these pork chops were. I was short on time, which is why I didn’t brine them, and it obviously didn’t matter. It must have been the wine and vinegar that tenderized them, as well as adding the great flavor, along with the complexity of the anchovy paste. Whatever the magic is, this is now my new way of making perfect pork chops!

I used Pinot Grigio and the anchovy paste I keep in the fridge. My chops were 1 1/4-inch-thick rib loin pork chops and I simmered the pork chops for 8 minutes after adding them back to the skillet and they were perfectly tender. I simmered just the sauce for 2 minutes to reduce it a bit.

I served them with wild rice to sop up the great pan sauce as well as steamed broccoli. With the pan sauce, we didn’t feel the chops needed the additional olive oil drizzle. Definitely a company-worthy dish!!

Pork loves vinegar, onions love peppers, and we loved all of these flavors. I loved that the brine time was short, only 2 hours, as well as its versatility of seasoning. I used the end of a head of garlic and a handful of a favorite Italian herb seasoning (Penzey’s Tuscan Sunset). Next time I’ll only make half the quantity of brine, though, as I had way more than needed to cover the chops.

I had beautiful rib chops that were just over 1 inch thick. Dissolving the salt and sugar for the brine in a small amount of water is genius. Next time I’ll use the microwave to make it easier. I brined the chops for exactly 2 hours.

And though the sear timing was on point, returning the pork chops to the skillet to cook took just 4 minutes, which isn’t much time to marry the flavors, and I was concerned that the pork would be overdone. However, we weren’t disappointed. And I didn’t reduce the sauce quite as much as the picture and instructions indicated because I like it saucy—and was very happy with a generous nap of silky, flavorful sauce. The pork was really juicy and tender, and the sauce tangy and unctuous. I used a dry rosé for the pan sauce (I’d thought I had white but nope).

Careful with the olives; though delicious, their assertive flavor can be a tad shouty. I’d start with just a few tablespoons of olives, adding more during your final tasting if you love their briny pop.