These pork chops with vinegar and sweet peppers shows exactly how simple and inspired one-skillet cooking can be. Main and side dish with very little effort or cleanup.–Renee Schettler Rossi 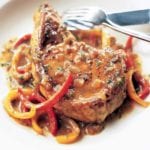 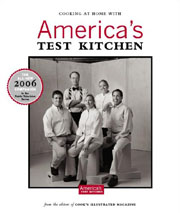 This is one of those recipes that I would keep as a basic staple. The brining really did make the pork chop flavorful and juicy, and I found that if I brined the meat first, by the time everything else was chopped and prepped, the 30 minutes were nearly up.

The amount of sauce and peppers was perfect and I didn’t need to add additional vinegar at the end. I’ll definitely be making this one again.

This was enjoyable to make and very tasty. I opted for center-cut chops that were on the larger side of 1 inch in thickness.

I used the brine, rather than employ enhanced pork, and also used Morton kosher salt. The tastes of the anchovy fillets, vinegar, and fresh rosemary accented the dish nicely. I removed the chops from the oven at exactly 145°F, since I prefer some pinkness in pork dishes, and, with the thicker type chops, this was easily achieved.