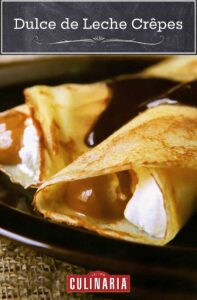 We have a friend named Jeff Salguero who invested in one of the restaurants and whose family is from Uruguay. He goes to South America regularly. And every time he came back, he’d ask why we didn’t have pancakes de dulce de leche on the menu.

Dulce de leche, or milk caramel, is the dessert ingredient of choice all over Latin America, and crêpes filled with dulce de leche and whipped cream are as common in Uruguay as apple pie is in the United States.

Finally, to make Jeff stop asking, we put dulce de leche crepes on the menu. And we named the dessert after him. It took only a few months before customers demanded it at all the other restaurants. That was five years ago. It’s not going anywhere, and Jeff still eats it when he comes for dinner.–Sasa Mahr-Batuz and Andy Pforzheimer

We swoon to dulce de leche. So much so that if we could, we’d slink into a vat of it and revel until we were giddy. So it’s probably not a bad thing that it takes four hours to magically morph condensed milk into dulce de leche. Though the process isn’t for the impatient. It is as simple as plopping the can in a pot of water and letting it simmer for hours. Should you find yourself with a truly insatiable craving that just can’t wait, look for canned or jarred dulce de leche in most supermarkets. Usually not far from the Latin American products.

Why do you rest crêpe batter?

Resting the batter is a crucial part of making crêpes. By resting the batter, you allow the flour to bloom, which means to absorb the liquid fully. It also gives the gluten a chance to relax, so no rubbery crêpes.

How thin should crêpe batter be?

Your batter should be smooth with no lumps and have the consistency of heavy cream.

How can I make my crêpes lighter?

For a lighter crêpe batter, substitute club soda for the water in the recipe.

What’s the point of a crêpe pan and is it worth it?

A classic crêpe pan is specially designed to turn out perfect-sized crêpe. Also, its low flared sides make flipping crêpes a cinch. And the thin bottom heats quickly and evenly and when properly seasoned is the ideal nonstick surface. Don’t feel like buying another pan? An 8-to-10-inch nonstick skillet with rounded or flared sides will work well.

Can I make crêpes ahead of time?

Yes, you can. After making the crêpes, just stack them neatly. Slide the crêpe stack into a large resealable plastic bag and toss them in the fridge. The crêpes will keep like this for up to 3 days. Let the stack sit at room temperature until the crêpes are pliable, about an hour, and then peel them apart and proceed with your recipe. 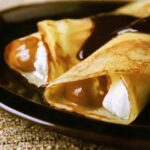 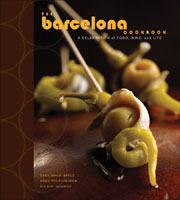 For the dulce de leche

For the chocolate sauce

Assemble the crepes and serve

Despite multiple warnings online not to try this method of making dulce de leche at home, I took a deep breath, boiled the water, dropped the can, and committed to sticking around the kitchen and keeping a close eye on the pot while my condensed milk transformed in a sealed can. People have posted so many pictures online of exploded cans with splatters of dulce de leche covering the walls of a kitchen that I made up my mind I would not let that happen.

I kept water very close to the stove so that I could keep replacing the water as it evaporated from the pot. I carefully allowed my can to cool to room temperature and when I opened the can I was delighted by the miracle transformation that had occurred. For the price of a can of condensed milk, I now had a can of dulce de leche.

The two most important points here: 1. Keep the can submerged under water at all times, and 2.) Open the can only after it cools to room temperature.

This dulce de leche crêpes recipe was a risk worth taking! My final product was good, but I can’t help but think that it would have been darker and richer had I been able to keep the water at a constant simmer, which would only have been accomplished using hot water. Next time I’ll use a tea kettle and add hot water, as the room-temperature water seemed to stop the simmering process.