Shrimp paste is a classic Southern treat that is simply perfect made with a few ingredients that you likely have on hand. Pick up some tiny, fresh shrimps and get to making this delish snack as soon as you can.

Modern recipes for this venerable Lowcountry shrimp paste dish can be complicated by up to a dozen ingredients. But the traditional ones, which have withstood the test of time and the canned-soup craze, are simple almost to the point of austerity, containing little more than butter and shrimp. To my way of thinking, those are the best, for their apparent simplicity is deceptive; rich, creamy butter is the perfect background for the delicate taste of the tiny inlet shrimp that inhabit our coast. One needs only the barest trace of onion or pepper to point up and enliven the taste; too much of either throws the entire dish out of balance.

Traditionally, shrimp paste appeared mostly on tea tables, supper-party buffets, and at breakfast, where it might be served sliced and lightly fried. Its richness withstands most cocktails, so it translates nicely to a modern cocktail hour, and makes a handsome first course for a summer luncheon. Still, there is nothing to equal a shrimp paste sandwich cut thin and served with a cup of good, hot tea.

The traditional methods for making this shrimp paste are a mortar and pestle or using a meat grinder, and their texture is perhaps more interesting than the smooth paste made by the processor, but the machine makes such short work of it and produces a paste that is so much easier to mold and spread that, just this once, even I will admit to preferring it.–Damon Lee Fowler 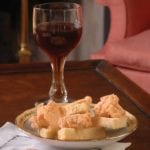 This Lowcountry version of shrimp paste relies on minimal ingredients, butter and shallots mainly, to retain the simplicity and flavor of the dish. Using a food processor means you can have it ready for cocktail hour in a snap.
Damon Lee Fowler
Prep 15 mins
Cook 15 mins
Total 30 mins
Appetizers
Southern
20
66 kcal
4 from 1 vote
Print Recipe 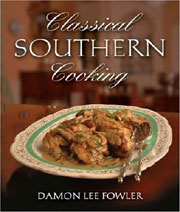 This is a simple and frequently served Low Country recipe from South Carolina. I have eaten it a number of times when visiting Charleston. I have never failed to enjoy it. This recipe, as prepared by exactly following the ingredients and amounts called for, resulted in what I would call about a 90th percentage result compared to what I have experienced in Charleston. The high point was the vibrant light pink color of the “paste,” and the accompanying airiness after the pulsing in the food processor. Care must be taken not to over-process. My result, which I would not call an actual paste, resulted in the light airy texture cited above. The low point was the limited amount of spiciness imparted from the cayenne. I used 1/4 teaspoon of Nigerian cayenne pepper and probably should have doubled it. In all, this was a winner that was thoroughly enjoyed served on toast points and crackers by 11 guests, who polished off the entire dish within half an hour.