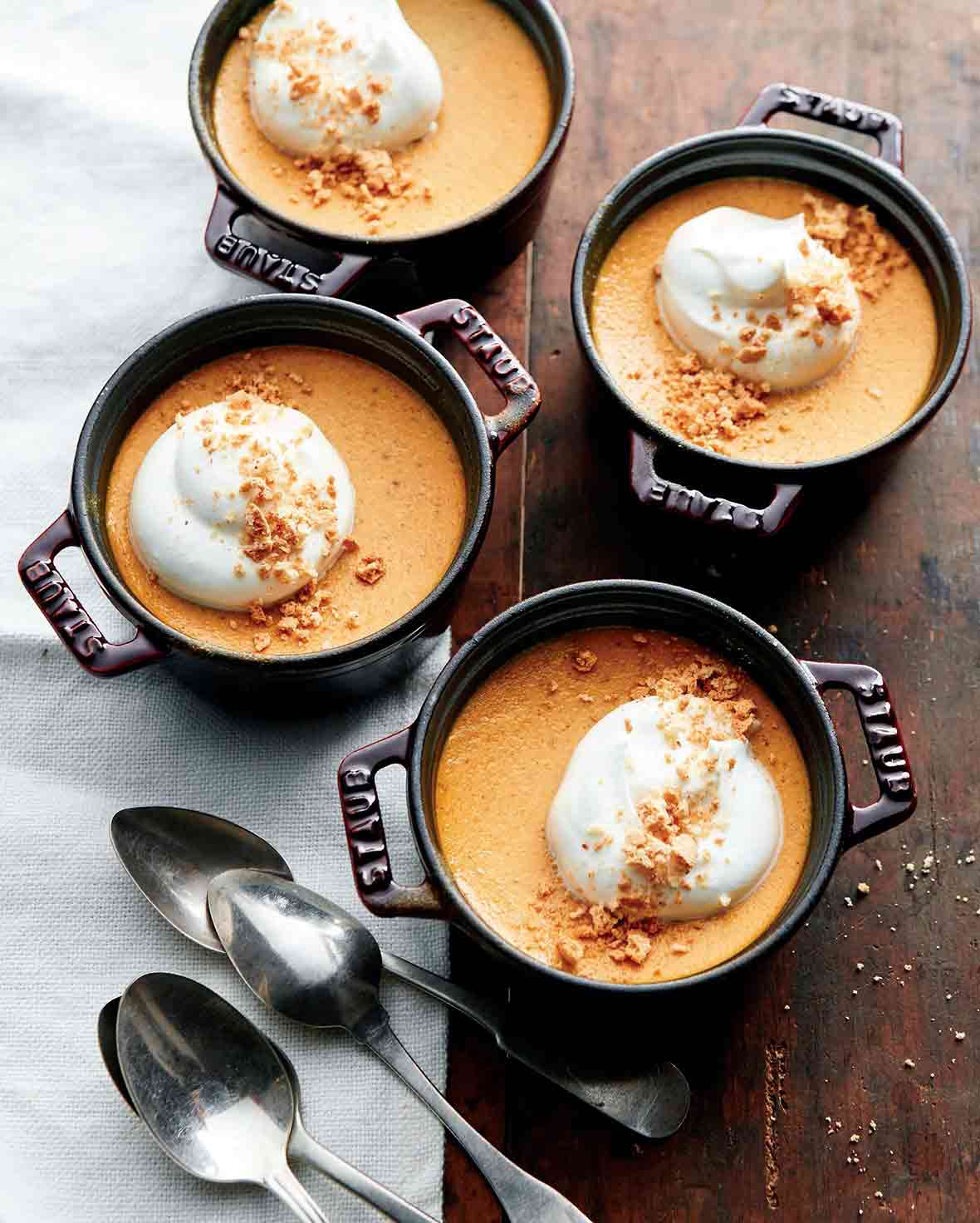 Though they go by the fancy name of pumpkin pots de crème, these creamy custards couldn’t be simpler to make. Yet the results are so complex, you (and your guests) are gonna crave them well past Thanksgiving. They look and taste like you spent all day working on them yet require less than half an hour of effort. We won’t tell if you don’t.–Angie Zoobkoff 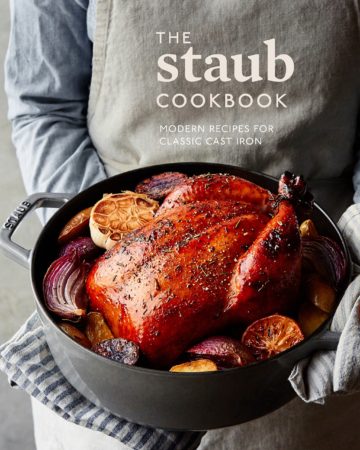 Make the pots de crème
Preheat the oven to 325°F (160°C).
In a medium saucepan over medium heat, whisk together the half-and-half, 1/4 cup brown sugar, and pumpkin. Bring to a very gentle simmer over medium heat, just until bubbles appear on the surface, and then remove from the heat and keep warm.
In a medium bowl, whisk together the egg yolks, the remaining 1/4 cup brown sugar, cinnamon, cloves, nutmeg, and salt. If you like a more prominent warming spice flavor, make your pinches of spice quite generous. Slowly pour in the half-and-half mixture, whisking constantly. Divide the mixture among 6 mini cast-iron cocottes or 4-ounce ramekins. Place the cocottes in a large roasting pan and carefully fill with water to come halfway up the sides of the cocottes.
Bake until the custard is just barely set in the middle, 40 to 50 minutes, depending on the size of your cocottes or ramekins. Remove the pan from the oven and then remove the cocottes or ramekins from the roasting pan. Let cool to room temperature. Cover and refrigerate for at least 3 hours and preferably at least 24 hours to allow the custard to chill completely and the flavors to meld.
Make the whipped topping
In the bowl of a stand mixer, combine the cream and maple syrup and whip until soft peaks form. Just before serving, top each pumpkin pot de creme with a dollop of whipped cream and some amaretti cookie crumbles.
Print Recipe

Lovely individual desserts that are sure to impress your dinner guests. The custard was creamy and delicious and the maple whip cream and scattering of amaretti cookies gave a lovely variety of textures. They were easy to make and mixed together easily by hand.

I would give a more generous pinch of cloves and nutmeg and up the cinnamon to really bring out some more fall spices. A fresh grating of nutmeg on top would also be nice.

We did find that the spices were a bit bland. Maybe the spices would develop more overnight. A little more spice and these would be perfect.

These pumpkin pots de creme were delicious and light. Just right after a big meal. I especially loved the addition of maple syrup to the whipped cream. The maple flavor went very well with the pumpkin.

The simple elegance of these custards seems too good to be easy. Yet if we seriously considered how easy it is to make this dessert, we would make it much more often. The pumpkin and spice make this an easy winter recipe although there is nothing that says you can’t use pumpkin puree any time.

The pumpkin does seem to slightly change the custard or pudding-like texture, although the half-and-half keeps the texture light. You can easily make this a few hours ahead and it is lovely. For just two, I decided to make a half recipe and everything scaled easily. In the half hour it takes to heat my oven, I was able to assemble the custard. The yolk/brown sugar/spice mixture whisked together easily with a small spatula and resembled a dark toffee sauce in color and thickness and it is easy to control the introduction of the half-and-half mixture by slowly tempering it in small drizzles as you whisk.

I added tap water at room temperature to the pan before sliding it into the oven. I gave it 55 minutes total (checking at 40 and 50 minutes) and then cooled it to room temperature before covering it to chill.

To whip the cream to soft peaks you can use an immersion whisk (the kind you might use to froth milk) in a plastic measuring cup since it is a small volume, although for a full recipe, you would be fine with the stand mixer suggested.

This was a delightful and not heavy dessert, which is quite welcome, especially at the holidays, and charmingly presented. We have a set of the same coquettes as in the photo and love to use them. The flavor was just gently spiced and the texture was almost fluffy compared to a heavier or denser dessert. If you cannot easily find the amaretti cookies, I found a Belgian almond thin (from Jules Destrooper) that had similar crisp lightness, especially when broken and gently smashed to crumbs.

When warming up the half and half, sugar and pumpkin, I was waiting for the mixture to start to simmer, and it suddenly thickened slightly. The texture then was borderline curdled but not ruined and still tasted good. Be very careful at this stage to remove the mixture from the heat before this happens. I'm not sure if there would have been a large difference, if this thickening hadn't happened. The final product might have been slightly smoother.

At first, I thought the custard "needed something," as the flavor was quite subtle. But the next day, it seemed very gentle and delicate in flavor and the cream topping and cookie crumbles finished the experience quite nicely. It was an elegant dessert.