This grilled whole trout is cooked in a cast iron skillet outdoors along with fingerling potatoes in a garlic- and herb-infused pan sauce that’s so flavorful we like to think of it as liquid gold.

Been somewhat hesitant to cook whole fish? We understand. This whole grilled trout recipe is an ideal lesson in how to cook fish to attain shatteringly crisp skin and tender fish. Spoiler alert: It’s a one-pan supper that involves both a grill and cast-iron skillet along with fingerling potatoes and a garlic- and herb-infused pan sauce that packs so much flavor it can only be described as liquid gold. And since the fish is cooked outside on the grill, you’re not left with a lingering fishy aroma in the house for days on end. Thankfully.–Angie Zoobkoff

About That Extra Liquid Gold

This grilled whole trout recipe includes a garlic- and herb-infused fat that’s magnificent. And it’s as versatile as it is simple to make. It also makes a lot more than you’ll need here which is a very, very good thing as you’re going to quickly want to douse everything with it. The leftovers can be stashed in your fridge for up to a week and you can rely on its herbaceous punch to embellish almost anything. 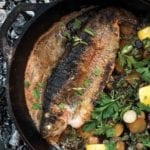 This grilled whole trout is cooked in a cast iron skillet outdoors along with fingerling potatoes in a garlic- and herb-infused pan sauce that’s so flavorful we like to think of it as liquid gold.
Greg & Gabrielle Denton
Prep 40 mins
Cook 20 mins
Total 1 hr
Entrees
American
2 servings
5 from 1 vote
Print Recipe 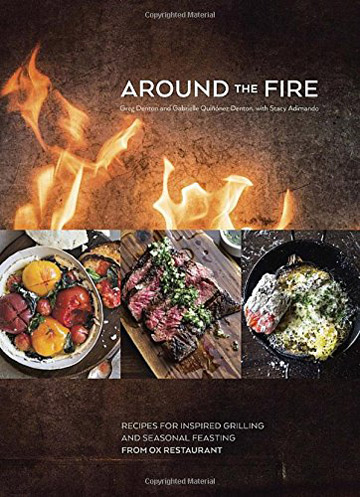 For the liquid gold

This is a great way to prepare a whole fish. The cast-iron pan allows you to get a nice, crisp skin on the fish and nicely browned potatoes.

I wasn’t sure about the “liquid gold” concept but it really makes a difference in getting a crisp skin on the fish and a nice crisp finish to the potatoes. I used a combination of duck fat, extra-virgin olive oil, and butter as the base for the liquid gold. It added a great amount of flavor to the fish and the potatoes. You will make quite a bit more than what is needed for this recipe, but I’m storing the strained remainder in my refrigerator for future use. I think you could also freeze it for a longer time.

My pan was a little crowded, so after removing the cooked fish, I cooked the potatoes for a few more minutes on my stovetop.

This was a wonderful way to cook a whole trout and the finished fish was moist and tender and the potatoes crisp and tender.

I had to use one larger trout so my cook time was a little longer, about 6 minutes per side. This easily fed 2 adults and 2 children for dinner.

A great summer dish. Can’t wait to try it again with some freshly caught lake trout!

When I went to remove the fish, the skin just fell off, so I ended up serving a platter of skinless fish fillets. My kids were happy to not have to pick off skin and stare at the head, but the idea of the overall presentation kind of fell apart.

The liquid gold came together very easily and added a really nice flavor to the finished dish.

This whole grilled trout recipe was surprisingly delicious. I went with rainbow trout. The crispiness of its skin worked very well with the soft texture of the fish. They were already gutted and deboned with the fins removed. They had a very few fine bones left in but the bones didn’t cause any problems.

The liquid gold definitely helped with taste. It provided hints of herb butter and was quick and easy to prepare.

I didn’t use the pan juices because the fish seemed moist enough for me.