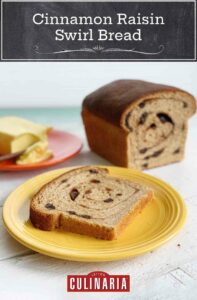 This cinnamon-raisin swirl bread is a homemade loaf of awesomeness made with whole wheat and oat flours with brown sugar, cinnamon, and raisins swirled throughout. Unspeakably more satisfying than anything you can buy.

This light loaf of cinnamon-raisin swirl bread owes much to the magnificently talented Stella Parks, author of the James Beard Award-winning cookbook, BraveTart. The bread itself pretty much hews to Stella’s, but I went off the rails when with my idealized notion of the cinnamon raisin swirl. We had some fragrant Ceylon cinnamon and freshly bought plump raisins just crying out to make this bread their swan song. Think California raisins with a death wish. What came out bested anything from Pepperidge Farm, my childhood go-to bread. Spread toasted slices of the bread with salted butter, your favorite nut butter, or my all-time favorite: peanut butter and sliced bananas.–David Leite

WHAT IS THE WINDOWPANE TEST?

The term windowpane test refers to the state of a dough that has been kneaded or folded enough to form a strong gluten network. To take the test, slice off a walnut-sized lump of dough and roll it into a ball. With both hands, slowly stretch and rotate the dough in all directions, pulling it into a translucent sheet. Keep stretching! If the dough tears in half, return it to the bowl, knead 5 minutes more, and test again. If the dough forms an irregularly shaped hole, knead 3 minutes more and test again. Clever, yeah? (Photo courtesy PinchMySalt) 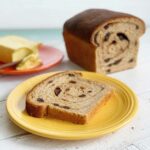 For the hot water slurry

For the bread dough

For the cinnamon-raisin swirl

Shape and bake the loaf

Why does my cinnamon-raisin swirl bread separate?

Great question. The most common reason cinnamon-raisin swirl bread will separate along the roll is that there’s no binder to hold the swirl filling to the dough. Many recipes have you roll out the dough, sprinkle the cinnamon sugar and raisins over it, and roll it up. That’s courting disaster. In this recipe, the eggwash you brush on the dough acts as the binder, giving the cinnamon sugar and raisins something to grab on to. The result? A delicate, loopy swirl with no gaps.

I’m not an experienced bread maker and decided I needed to tackle my favorite breakfast bread. I was pretty impressed with my results—a sign of good bread is to eat it “naked.” No butter, no nothing, and it satisfied my every taste bud.

Making the dough was fairly straightforward. I kneaded mine for 23 minutes total until it passed the windowpane test. I really liked the tip of microwaving the water and placing the dough in with it to rise.

Shaping the dough and rolling it in the cinnamon mixture was a cinch. The loaf didn’t quite crown the pan after 1 hour, but the texture felt good to the touch. Next time I’ll use yeast that doesn’t expire the month I’m using it and will expect more of a rise, but no issues to be found in the end result.

Definitely recommend pouring on ALL the butter, it gives it a nice glisten and touch of butter flavor.

As with all homemade breads, it needs to be used up in a few days and I can attest to its ability to transform in the toaster on the third day into more wonderfulness.

I love baking bread and was attracted to the slightly different method of mixing and diverse ingredients.

The bread seemed to be getting too brown after 30 minutes in the oven so I lightly covered it with foil for the remainder of the baking time. I left it for 15 minutes and then took it out and left it on a cooling rack for about 2 hours. It was painful to wait to try a slice–it smelled divine and was a beautiful loaf.

When sliced, the swirl was picture perfect. We toasted 2 slices and spread some butter on each slice. It was very, very good and will be a breakfast to look forward to every day this week. I might try freezing some slices for the future as there are only 2 of us.

The end product was delicious. I’m curious about the malt powder and the roux? We didn’t taste the malt flavor and I’m only guessing that the roux has something to do with the texture? Same for the oat flour and coconut oil? I might like a bit more cinnamon filling and will try it again with a tad more sugar and cinnamon. It was a bit time-consuming but well worth it.