These sweet potato puddings, made with spices and custard and mashed sweet potatoes, are a sweet tooth-satisfying side dish or dessert. So long, sweet potato casserole.

Adapted from Kris Jenner | In the Kitchen with Kris | Gallery Books, 2019

What’s the difference between this and sweet potato casserole?

This recipe was originally—and loftily—dubbed a “soufflé,” although we didn’t find that to be altogether accurate. It’s more of a pudding than a casserole, with a slightly denser, custardy consistency than the classic sweet potato side dish. And, of course, it lacks marshmallows, which makes it more appealing to some at the table, less to others. What you end up with, however, does make a damn fine stand-in that’s sufficiently sweet and rich to satisfy sweet tooths at dessert—or, for those who insist, at dinner. 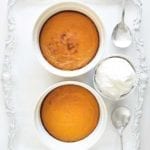 If you’d prefer to make these in individual ramekins, follow the recipe directions, divvying the soufflé mixture among buttered individual-size ramekins of any size. Cook until slightly puffed and done throughout, about 17 minutes for ramekins 3 1/2-inches in diameter, depending on the size of your dishes. You’ll simply want to monitor the puddings and pull them when they seem done. The smaller the vessel, the less time in the oven.

For starters, and whether or not it really matters, to me this is more of a pudding and not so much what I think of with the word “soufflé.” That being said, I think this is far far better than the holiday dish with sweet potatoes and brown sugar and marshmallows for those seeking a sweet potato dish that differs from that standard.

I ended up using ½ teaspoon nutmeg, but afterwards felt there could have been a bit more, so maybe that teaspoon that’s called for isn’t so terribly much after all.

I would prefer to bake the sweet potatoes and a friend suggested using a pressure cooker.

There was definitely a little bit of puffing up and a loss of wobbling when I decided to remove them from the oven. These were rich. They did look just like the picture, though, based on the size of the spoons and tray, I think mine made more, a lot more, than what is depicted there. And, because it is so very rich, I think the serving count of 10 to 12 is low. I think this could serve a lot more, as a little of this richness goes a long long way. In fact, it could easily be served (and I would recommend this) as a dessert, ie, in lieu of a pie.

This is really good. It’s so good that it tastes good cold. It’s a little more involved than a regular sweet potato casserole for a big meal like Thanksgiving but it’s worth the effort. I would definitely make this again. I would cut the recipe in half, though.

They were very good, not too sweet, and with the addition of more sugar I would have dessert soufflés. I used 1/2 cup of brown sugar and 1 cup of granulated sugar. The nutmeg I used was 1/2 teaspoon. I used eight 3 1/2-inch diameter ramekins for individual soufflés and baked them for 17 minutes.