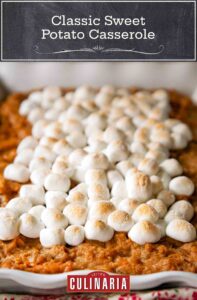 There are many variations of sweet potato casserole to choose from, but we love this traditional version best. A filling of sweetly spiced mashed sweet potatoes topped with toasted marshmallows. It’s a classic for good reason.

This classic sweet potato casserole is based on my grandmother’s recipe, which was sweet but not make-your-teeth-fall-out sweet, the latter of which is how many of my friends and family members like it. So whenever I cook some newfangled version—one that (gasp!) omits the marshmallows and adds weird stuff like brandy or cranberries—my dinner guests don’t argue about it, but snipes do arise. One friend, aiming to put an end to the foolishness, once said in all seriousness, “They don’t call ’em sweet potatoes for nothin’.”–Denise Gee

Can I make this ahead of time?

Yes. You can prepare the casserole through step 3 up to 24 hours in advance. Cover with foil and stash in the refrigerator until you’re ready to bake.

Can you halve this recipe?

Absolutely. Reduce all of the ingredients by half and bake the casserole in an 8-by-8-inch baking dish.

What should I serve with sweet potato casserole?

This casserole is a staple on many Thanksgiving tables, and we love serving it with all the other traditional Thanksgiving fare, including simple roast turkey, wild mushroom stuffing, black pepper mashed potatoes, spicy cranberry sauce, classic green bean casserole, and basic pan gravy. 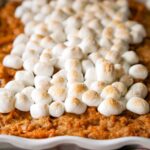 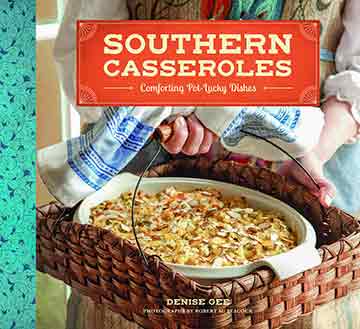 I’ve had several different types of sweet potato casserole with marshmallows in the past and disliked it time and again for being dessert-like sweet. My family convinced me to give this recipe a try and, to my utter astonishment, I liked it.

This classic sweet potato casserole was creamy and savory with a little sweetness. I liked the combination of spices. After peeling, I steamed them until tender and then mashed them by hand with the other ingredients except for the marshmallows. I found that mashing by hand made the potatoes very smooth, so a mixer wan’t necessary.

They were then put into a large oval casserole and baked for 30 minutes using a convection oven. I did go a little wrong here in that we had a 15-minute drive to my daughter’s home and I mistakenly put the marshmallows on the top before we left thinking I’d brown them at her home. They melted completely into the dish, and no trace was left but a few white fluffs on the sides.

The dish was delicious, with many people taking seconds. I remade the dish a second time, browning the marshmallows as directed, and there was no difference in taste between the two, but the browned marshmallow did look very pretty on top. I can see this pretty dish gracing many future holiday tables, although I might forgo or at least decrease the amount of regular sugar, as I don’t know that it added much to the overall flavor of the dish other than more sweetness.

I am someone who likes sweet potatoes straight out of the oven, so that is how we started this recipe—by baking the beautiful orange potatoes. I was intrigued by the addition of sugars, eggs, and spices. I was thinking it would be too sweet.

We also made this sweet potato casserole recipe on Christmas and parbaked the casserole for 20 minutes and finished it off in the oven the next day. We ended up using jumbo marshmallows, and the topping still browned beautifully. My kids loved it. I will use this recipe again.

Well, this was just about perfect. It’s my new go-to sweet potato casserole recipe. The author mentioned that this recipe is based on her grandmother’s recipe, which makes complete sense as the ingredients, preparation, and instructions are impeccable.

After I boiled and mashed my sweet potatoes, I was overwhelmed by the amount of fluffy potato nearly overflowing out of my largest mixing bowl. I was sure that the mixture would not fit into a standard 13-by-9-inch casserole dish. However, when I poured the stuff in, it filled my dish perfectly, leaving a bit of space at the top for the mini marshmallows.

The finished product was lovely, and we ate it alongside homemade meatloaf for an entirely delicious and unhealthy winter treat. This casserole is sweet, folks. True to the author’s words, it’s not overly sweet, but it’s still borderline dessert. In any case, it’s sure to please a crowd.

I started to make this classic sweet potato casserole recipe when I realized, late in the day, that I needed to bring something to a New Year’s Eve party. It was quite amusing to me that the rest of the party food was small plates or tapas, so the Thanksgiving theme didn’t quite fit, but as a true testament to this recipe’s flavor, this was the only dish that was entirely consumed—and early in the evening!

The directions were quite easy to follow. This also feels like a recipe that is easy to “wing,” i.e. take out a bit of the sugar if you feel like it, add whole milk instead of half-and-half, omit one of the spices if it’s not your favorite flavor. I actually omitted the ginger, and it was fine.

My one quibble is that the casserole didn’t need 15 minutes to finish heating and brown the marshmallows. This only took about 5 minutes. A real winner!

This classic sweet potato casserole is very good as an accompaniment to any weeknight meal or as an alternative to the usual mashed potatoes. While this is a sweet dish, it also has a savory side, so don’t let the sugar and marshmallows be a deterrent.

The spices blend nicely during cooking, and the end result is not so sweet as to make your teeth fall out, although I found the amount of marshmallows called for was too much for my taste, so I just sprinkled some evenly over the top. (I used minis but jumbos could also be used by cutting them into quarters.) Adjust to your personal taste.

My somewhat fussy tasters loved it as is. This would be a great recipe for entertaining or a covered dish event. This one is a keeper in my rotation. (I prepared half the recipe for the 3 of us in an 8-by-8-inch baking dish. It pairs well with turkey, chicken, or pork.)