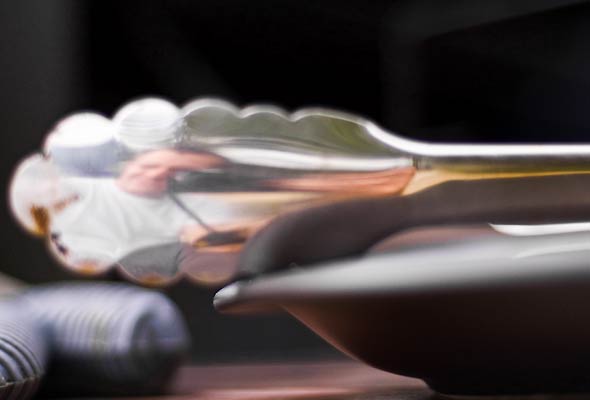 When Waldy Malouf, owner of Beacon Restaurant in New York City, broke his ankle in several places, I couldn’t have been happier. Nothing against Malouf. If anything, he’s a friendly bear of a guy, unlike the pan-throwing heathens I had the bad luck to work with when I was a waiter. Nor was it thinly veiled sadomasochistic tendencies that warmed me inside when I got word of his misfortune. Rather it was something far more sinister: grilling season. It was fast approaching, and I couldn’t present my claque of culinistas with yet another platter of incinerated chicken breasts. Because Malouf had to hang up his tongs temporarily, thanks to a cast that came up to his knee, I did what any desperate cook would do. I ambushed him at home, in Connecticut.

My arrival was announced by a sonic boom of barking from his four dogs—Xena (warrior-like and very much a princess), Rollo (a Corgi who as a puppy always lost footing when running down hills), Mr. Pink (from Reservoir Dogs), and Puddles (for obvious reasons). I assumed it was all this snuffling canine activity underfoot that caused Malouf’s condition. But apparently it was a weekend stroll on the patio.

“He fell only two inches off the flagstone, and what does he get?” asked Meg, Malouf’s wife. “Nine pins, scaffolding, and a surprise six-week vacation,” she answered, shaking her head.

Malouf waved off the comment with his meaty hand. “Let’s cook,” he bellowed.

Clearly his medical house arrest gave him a severe bout of cabin fever, because laid out on the long wooden counter were four large trays filled with cups, bowls, and bundles of precisely measured ingredients for the dishes we were going to make. The menu: chicken breasts with balsamic marinade; New York strip steaks with black pepper, onions, and garlic; sea scallops on rosemary skewers with tomato-ginger chutney; and grilled swordfish steaks in a mustard-seed crust.

I was all set to head out back to learn a showy trick or two that would get me through the summer, but it was clear Malouf wasn’t going to allow me anywhere near his grill without at least a lesson in the basics of open-fire cooking, which he outlines to great effect in his book High Heat (Broadway Books, 2003). “Marinades, dry rubs, and glazes impart flavor through ingredients,” he said while chopping tomatoes for the chutney.

Not exactly headline news, Waldy, I said to myself.

“But searing and smoking impart taste through technique,” he added, as he swung himself Fred Astaire-like on his crutches to the fridge. I suddenly understood the reason for my hook-and-ladder-company chicken: It never occurred to me there was such a thing as theory or technique when it came to open-fire cooking. Hell, wasn’t the idea to get primal and throw a hunk of meat on the fire just as our prehistoric ancestors did—the only difference being we’d had the evolutionary good fortune to come along after the discovery of vodka and tonic?

Apparently not, according to Malouf. “People often confuse open-fire cooking with out-of-control high-heat cooking. They’re not the same. You have to coax the fire, work with it.” For example, he often starts things at high heat, but finishes them at a lower heat. “Your goal isn’t to incinerate dinner,” he added a bit too clairvoyantly.

For the next half hour, Malouf gave me what amounted to a cultural anthropology lesson on the use of open-fire cooking, which circled around the Mediterranean and hopscotched through South America. “Putting food on the fire is a basic and ancient human experience—all cultures share it,” he said, gathering the ingredients. “But whether I’m inspired by the spit roasting of Greece or Spain or by the way the Argentines sear beef on skewers, I always try to add some American back yard to my cooking.” He handed me a few trays, and we made our way outside.

On the patio, the scene of Malouf’s misadventure, the grill had been pre-heating for 30 minutes. This was not the tabletop hibachi of my youth. It was bigger and sexier-looking than some European cars. Inside was a special smoker box, where wet wood chips are scattered for a perfectly controlled smoky flavor. And there were enough knobs and dials to make a NASA engineer feel right at home.

“We put the food on the grill,” he said simply. What a minute! This didn’t seem any different than what I did every disastrous Saturday night. Where was the theory, where was all this technique? I was about to balk when Malouf passed his hand over the grill, lingering in some spots, skimming over others. Then he plopped down the steaks, swordfish, and chicken in three discrete groups. He’s a human thermometer, I thought.

“Then you leave them alone.” I wondered if he said this because he could tell just by looking at me that I’m carker, someone utterly too codependent with his food to let it simply cook without anxiously fussing over it.

“They’ll tell you.” Okay, this fell into feel-the-force-Luke category, but I decided to be a sport and let the food speak to me.

While we waited, Malouf continued the lesson. “This is where the grill turns into a smoker and an oven.” By closing the lid, he explained, the smoke from the wood he had tossed in permeates the food, adding flavor. But at the same time, the heat circulates like in an oven, cooking the food more evenly. Flare-ups, the bane of most weekend warriors, are controlled, too; deprived of oxygen, they die out instantly. The subtle interplay of technique and science was making itself felt.

A while later, he opened the grill and gently lifted a steak. He motioned for me to get down and look at its underbelly. “See how it’s not sticking and has real prominent grill marks?” he asked. “That’s how you know it’s ready to turn.” He slid the steak back and forth along the slats to completely loosen it and then flipped it. He did the same to the rest.

“How do you know when they’re done?”

“Rely on an instant-read thermometer at first. If you get in the habit of using it, you’ll get to the point where you don’t need it—you’ll go by how things feel.”

He then had me poke the fleshy triangle of skin between my thumb and index finger. “That’s what rare meat feels like,” he said. Then he poked the inside of his muscular forearm. “And that’s well done.” I poked my arm; it didn’t feel much different than my hand. I jabbed a few other parts of my body. There wasn’t a place on me that was well-done.

“But most important,” he said, transferring everything to platters, “make sure to take the food off the grill when it’s still below temperature. It’ll continue to cook.”

We took the platters to the kitchen, and after letting the food rest so the juices could redistribute—another key technique point—Malouf put together a plate for me. Everything was beautifully crusted and juicy, and the bold tang of the marinades and the deep muskiness of the rubs mixed with the smokiness, making for excellent eating. Meg offered me some food to take home, but I demurred. I knew that as soon as I got there I’d be lighting up my grill and committing to memory everything this patron saint of open-fire cooking had told me.

After lunch, I took the train home. The woman sitting next to me began sniffing in my direction. I smelled my shirt and it reeked of the satisfying, manly scent of fat and smoke. “It’s me,” I assented. “I was playing with fire.” A wave of fear rippled across her face, and she got up and moved across the aisle.

© 2005 David Leite. All rights reserved. All materials used with permission.