David and Renee each explain why they’re drawn to a particular style of recipe, whether one that meanders lyrically and descriptively or one that’s not much more than a bulleted list. 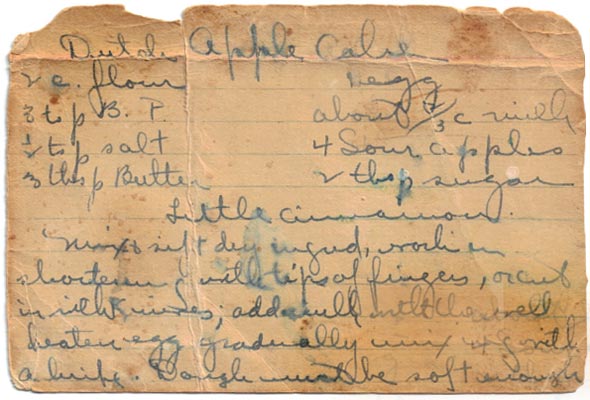 I have a thing for everyday loveliness. When I was little and my mom baked batches of bread, I’d coyly request a slice while it was still warm from the oven…and always from the loftiest loaf. In high school, I opted for cross country’s winding gravel roads rather than track’s monotonous cinder loop. As a New Yorker, I took my time walking through Central Park every chance I could rather than taking the subway. And when, on rare occasion, I took the train home, I’d hop off a stop earlier than I ought, lugging my groceries several extra blocks just so I could emerge amid a cobblestone square with trees rather than the usual sidewalk squalor.

It only seems fitting that I’d be drawn to recipes with a little character. Those far-and-few-between recipes that play loose and easy with language, that dance to their own rhythm of style and grammar, that are imbued with a touch of the writer’s personality.

It’s not that I can’t appreciate the practicality of bullet-pointed recipes in severely succinct language that lets pretty much everything fall to the imagination. I understand. It’s tremendously efficient. Like the shortest way home from the subway. But that approach, quite frankly, bores me. And often leaves me bereft of subtle nuances that could make my understanding of the recipe more complete. So rote are the minimalist recipes with uninspired instructions that even copyright law renders them outside of legal protection, deeming them indistinguishable from one another. It’s only when a writer inextricably interjects her or himself into the instructions, rendering instructions into prose, does a recipe transcend into the realm of copyright-legit art.

I’m not talking longwinded headnotes. And I’m not suggesting a recipe need be poetically epic to be suffused with personality. It can still be simple. Take the succinct recipes penned by the inimitable Laurie Colwin. She memorably blurred the line between ingredient list and instructions, which may or may not appeal to you, yet it’s undeniable that she was fluent in the language of the everyday and all the little annoyances and pleasures that take place in the kitchen. We benefit not just from her culinary expertise, but from her life. Note, if you will, how she channels Katharine Hepburn’s brownie recipe in just four dozen or so words.

There are, of course, others. M. F. K. Fisher. Ruth Reichl. Judy Rodgers. Fran Gage. Whether softspoken, plainspoken, or outspoken, each of them knows how to linger over a description that mirrors their thoughts, their cooking experiences, and, at times, some measure of their very being. Take Gage, who in The New American Olive Oil disregards more humdrum standardized descriptions for caramelized onions and instead paints them “the color of a polished mahogany table.” How helpful to the novice cook to have this explained in recognizable terms rather than simply and rather offhandedly be instructed to “cook until caramelized.” And what a lovely little interlude to happen upon while in the midst of making supper.

Perhaps we’d all save a few seconds here and there if we dispensed with extraneous adjectives and explanations and set them aside to appreciate during a less rushed day. But here’s the thing: You may have every intention of doing so, but that sometimes doesn’t happen. Life goes by pretty quickly. I prefer to cling to what loveliness there is when it happens, even if that means taking a slightly longer glance at that batter-splattered recipe ripped from a magazine long ago.

Laurie Colwin. Kate Hepburn. Fudgy brownies. Mine is a losing proposition, if I ever saw one. If one of us is going to get strung up in the public square and poked with the business end of sharp farm tools, it surely isn’t going to be Renee. But here goes.

I enjoy beautiful words as much as the next cook. Maybe more, being a writer. I’ve banged my head against the wall countless times trying to find descriptive ways of explaining to you, dear readers, what a perfectly griddled pancake looks like or when onions are at a precise state of wilted-dom. But I’ve got to tell you, I like the division of church and state—or in this case, art and craft.

Gorgeous language is entirely welcome in a recipe, but come on—for God’s sake, not in the directions. Let’s keep it relegated to the headnote. That’s where all of the everyday prettiness—the art—Renee loves should live.

Now, I’ve never seen Renee cook, but I imagine it’s probably an act of supreme Zen meditation. I see her humming a Gershwin tune softly to herself, thrumming her fingers on the counter as she leans over a recipe, smiling at all those conjunction junctions, hooking words and phrases and clauses and making them function. I wouldn’t be surprised if woodland creatures gather at her feet while birds twitter around her head, so at one with the prose is she. And the actual act of putting together a meal? Sheer fluidity Martha Graham would envy, I’m sure.

I, on the other hand, have every intention of cooking like that, and I always start that way. But 20 minutes later, I’ve usually discovered I’ve forgotten something at the grocery store, so I have to stomp around looking for a replacement. The One then asks, for the tenth time, “When will dinner be ready?” As the tension escalates, you’d think my cooking motto, no doubt brazenly tattooed across my ample chest, is, “No pot left behind,” because the counter, sideboard, and kitchen table are strewn with dirty cookware. And the sad thing is I’m the one who lives in the country part-time with a yard of woodland creatures. I’m the one with a huge kitchen. But with all the clanking of pans and cursing to the fates, nary a bird would dare cross our property line.

What does all of this have to do with the way a recipe is written? A lot. I like a recipe to be clear, concise, descriptive, and orderly—that’s the craft. I want to get in and out and get on with it. But that’s a hard thing to do when the ingredients list is embedded in the directions, like Colwin is wont to do. Huh? Or when there’s a lot of chatty Cathy me-me-me narrative going on, and I have to keep returning back to the recipe, wooden spoon dripping olive oil everywhere, while I run my index finger down the page trying to find my place again. I don’t mind snuggling up to a writer, having her take me by the hand through her recipe, her cooking domain. But when I have to sift through anecdotes about her husband’s eating habits and her kids’ preference for dark chocolate in between steps six and seven, it just mucks up the cooking process.

Speaking of numbered steps, I can’t fathom why so many recipes are bereft of them. Numbers are what make society run. (Try not having a social security number, license number, telephone number.) And they have an elegant logic that’s utterly failsafe: two follows one, three follows two, which follows one, and so forth. When a recipe is numbered, it makes for (pun intended) an easily digestible chunk of text. And face it, when you’re making cassoulet from LC recipe tester Cindi Kruth, you better believe you need plenty of number steps to make it through the end without plunging your head into duck fat and ending it all. For me, in the kitchen at least, it’s just the facts, ma’am.

Now, get me away from the stress of cooking a complicated, three-day recipe, or the frenetic pace of a quick weeknight meal, and I thoroughly enjoy being seduced by a recipe, my senses being tickled by letters that become words that become sentences that become, in the end, joy. But like most of my best reading, it’s done prone—in bed, on the couch, on the floor, in a chaise on the patio. Definitely not while standing facing the stove. Originally published June 25, 2010.

Tell us: What kind of recipe do you like?

Are you the sort of home cook who gets lost in the lyricism of a recipe? Or do you prefer to just glance at a recipe so you can keep focused on the task at hand? Let us know in a comment below.