4. Bake the brownies in a buttered and floured 8-inch-square pan at 325°F for about 40 minutes. You can cut these brownies into squares, once they have cooled, and eat them out of the pan, but it is so much nicer to pile them onto a fancy plate.–Renee Schettler Rossi 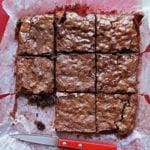 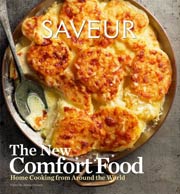 It’s sorta interesting to us that Colwin clearly was not a fan of anything obscuring the chocolate in these gooey brownies, as she omitted the handful of walnuts that appeared in Katharine Hepburn’s original recipe. Given our druthers, we’d add ’em back in.

In my opinion, these Katharine Hepburn brownies are perfect brownies. They’re dark and fudgy with a little edge of bitter flavor. The fact that you can make this recipe in one saucepan only increases its appeal.

Incredible. These are super easy, one-saucepan brownies. The baking time was right on, and they were absolutely delicious. Though nuts are optional, as far as I’m concerned, they make these Katharine Hepburn brownies even more heavenly. I shared them with family, and our rating was unanimous: Chewy, chocolaty, and absolutely wonderful. I think I’ll make another batch tonight. Do try them. You won’t be disappointed.

This is an easy, basic, no-frills, old-fashioned recipe—perfect for those who love sweet, uncomplicated brownies. They’re chewy on the edges, moist and fudgy in the middle, and they form the hallmark of a good brownie: That thin, crispy layer on top. As the chocolate is really the star here, make sure to use the best quality unsweetened you can find. With a dollop of vanilla ice cream, the sweet tooth of both young and old should be sated with these Katharine Hepburn brownies.

This Katharine Hepburn brownies recipe is easy and absolutely delicious. It took about 5 minutes to mix and 40 minutes to bake. I might have underbaked the brownies just a bit, as they are very chewy and fudgy. This makes them delicious, but very difficult to cut into neat squares. A few more minutes in the oven wouldn’t have compromised moistness, but would’ve made it easier for a beautiful presentation of perfectly cut squares.

These Katharine Hepburn brownies are nice, chewy brownies. I’m not a fan of nuts in brownies, so I like that the basic recipe calls for no additions (they’re just optional). I love that the recipe comes together so quickly, too. There weren’t any left in the pan to take to work the next day.

These brownies could not be simpler to make. The recipe yields light, moist, fudgy, somewhat thin brownies with a slightly cake-like texture. I love that this recipe does not call for a lot of flour. All the ingredients were already in my pantry except for the unsweetened chocolate. I ended up using Valrhona bittersweet (70%) and added just shy of 1 cup sugar. The recipe was right on in terms of baking time and the brownies were enjoyed by all. I will definitely make this recipe again. I lined my pan with parchment so clean up was a breeze.