This Manhattan cocktail isn’t to be confused with the contemporary Manhattan cocktail (usually 3 ounces of bourbon to 1 1/2 ounces of vermouth plus bitters and cherries). This classic recipe first appeared in the latter part of the nineteenth century and is referenced in later editions of How to Mix Drinks or the Bon Vivant’s Companion as well as Harry Johnson’s 1882 Bartenders’ Manual. This forgotten formula has a higher ratio of sweet vermouth to rye whiskey, with an accent of Curaçao and Boker’s bitters, served straight up with a lemon twist. Cherries in Manhattans came later as the mixture evolved into a different cocktail. The subtle mingling of flavors in this version illustrate an older style of drink making.–Jason Kosmas

LC Necessity Is The Mother Of Invention Note

We’re so uncouth, we didn’t even realize there was such a thing as a “mixing glass” until we set about to mix this drink for ourselves. Yet necessity truly is the mother of invention, especially when a Manhattan cocktail is on the line. We think you’ll manage to jury-rig something, too. 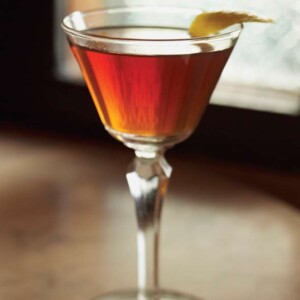 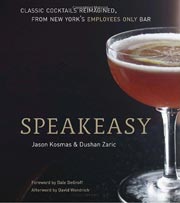 We’ve enjoyed Manhattans using bourbon for years, and this Manhattan made with rye whiskey and Grand Marnier was equally delicious. We followed the “stir for 40 revolutions” direction and the drink was smooth, cooling, and distinctive. On a side note, we thought the addition of “cold” ice cubes was interesting. Aren’t all ice cubes cold? Anyhow, we’ll definitely keep this recipe close to the bar to make again!

This Classic Manhattan is a very smooth, mellow sipper. Keep in mind that this easy-going drink is basically pure alcohol, so it’s quite potent, too! NOTE: “cold ice cubes” are mentioned in the recipe. I don’t think you can get ice cubes any way other than cold!

I love Manhattans, and while I usually prefer bourbon, I love a good rye. This classic recipe is mellowed by the large amount of vermouth, and sweetened by the Grand Marnier. Devotees to specific ryes may scoff at this recipe because the rye is in the background, but it’s worth a try. The beauty of such a simple drink is the ability to make it to suit your mood. If you want to really appreciate this, I recommend using a quality sweet vermouth, one that hasn’t been opened or has just been opened recently. Bad vermouth will ruin the experience.