Grilled littleneck clams are an iconic Tokyo dish, especially in the old fishermen neighborhoods that ring Tokyo Bay, which was once teeming with shellfish. Called yakihama (from hamaguri, a kind of large clam available in Japan), this cooking tradition reaches back hundreds of years. The littleneck clams that are available here are a good substitute. Mitsuba is a fresh-tasting Japanese herb. If you can’t find it, you can use cilantro or even slivered scallion greens.–Tadashi Ono and Harris Salat

Don’t knock it till you try it. (Though you do need to work quickly and carefully so as not to knock over the sauced clams and tip out their precious liquid.) 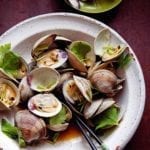 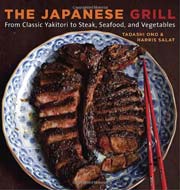 Delicious fast food from the grill! Briny, smoky, sweet, and tender clams are guaranteed when you use this recipe. They’re a very nice change from the usual summer staple of steamed clams with drawn butter, where the delicate clam flavor gets overwhelmed by the cloying butter. Here, the seafood flavor shines through the salty seasoning that enhances their briny essence. It only takes seconds to put the sauce together and just a couple of minutes to cook the clams. In fact, it may be easier to put only a dozen at a time on the grill, as they cook quickly and it takes a moment to add the sauce. By the time you’re done adding the soy mixture to the last clam (I found a turkey baster perfect for the job), you can start removing them to a platter. Then proceed with the second dozen. The shells are quite hot and keep the clams warm for a bit, so be cautious about picking them up by the shell. The soy and sake mixture actually makes enough for 36 clams if you use a teaspoon for each clam, so you’ll have a bit extra unless you start out with more clams — and more is better here! Six of these small clams per person is not nearly enough; everyone wants more. They’re a bit salty, so I will try a high-quality low-sodium soy sauce or tamari the next time. But there will be many next times, and soon! I’ll also be trying this on mussels, my favorite bivalves.

The grilled clams’ natural flavors really opened up with this simple sauce. They are a little finicky to make but worth doing if you’ve got the grill going anyway. Notes: Don’t fight with them. If they are difficult to pry open, they aren’t done enough. Time on the grill is relative — two minutes was not enough for my grill. Do in batches of six to eight to keep up with the opening and drizzling. Some “spit” or “exploded” shortly after opening.

I had to prop the clams up on one side of the grill to balance them enough to hold the sauce/sake mixture. I could not find mitsuba at my local Asian market, and it’s a big one, so it must not be that available. I opted not to use any greens at all. They didn’t really need it anyway.

Tasty results, but prying apart hot clams on the grill was not my favorite part — awkward! You have to work quickly or the clams overcook before you even get the sauce on them! I found it easier to use a combination of tongs and large spoon — not two pairs of tongs. If I were to do this again, I would add a tablespoon of sugar to the soy mixture to round out the flavor profile.