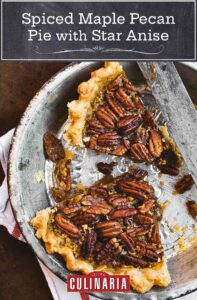 This spiced maple pecan pie with star anise, from Melissa Clark, uses a nifty technique to amp up the maple flavor. An infusion of spice from star anise adds a woodsy warmth to the sweet, caramel-y filling and crunchy pecans.

I never thought to simmer down maple syrup until it turns thick, viscous, and extremely maple-y until I made Bill Yosses’ maple ice cream recipe. Yosses, the pastry chef at the White House and a good friend of mine (we wrote a cookbook together), reduces the syrup to eliminate as much of the water as possible, which gives the smoothest, silkiest textured ice cream imaginable, with an intense maple flavor. He also recommends reducing maple syrup for any recipe in which you want an extremely vibrant maple character.

After trying his amazing ice cream recipe, I began to think about what else might benefit from reduced maple syrup’s profound caramel sweetness and came up with a pecan pie recipe. The problem with most maple pecan pies is that the maple becomes shy and quiet in the company of all those assertive toasted nuts. Simmering down the syrup, I hoped, would help it hold its own. So I tried it and it worked beautifully, with the sweet maple in perfect balance with the nutty pecans. It became my go-to pecan pie technique for years.

Then one Thanksgiving, I decided to add a layer of complexity to the pecan pie by infusing whole spices into the maple syrup while it was simmering. I chose star anise because I thought the sharp, woodsy fennel flavor would add an unexpected nuance to the classic combination of maple and nuts. That’s just what happened.—Melissa Clark

What can I substitute for the pecans in spiced maple pecan pie?

Not partial to pecans? Toasted cashews would be a really nice, buttery, soft substitute for the pecans.

Can I leave the star anise out of my spiced maple pecan pie?

If you want to skip the star anise, go right ahead. You’ll be left with a stellar, simpler, and more traditional pie with an excellent, deep maple flavor. You could also replace it with a couple of cinnamon sticks.

What kind of maple syrup should I use in my spiced maple pecan pie?

If you can get Grade B maple syrup, which has a fuller, richer flavor than the usual Grade A stuff, your pie will be even more maple-y. That’s what Melissa Clark uses.

Can I add anything else to my spiced maple pecan pie?

Drizzle a little melted extra-bitter (72 percent) chocolate all over the top of the pie. It helps cut the sweetness and adds chocolate, which never hurts anything. 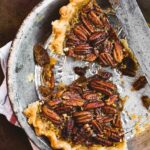 This pie is warm and licorice-y from the anise, toasty from the roasted pecans, and as syrupy, sugary, and toothachingly sweet as a proper pecan pie should be. I wouldn’t have it any other way, though a dollop of crème fraîche tempers the gooey filling without compromising its integrity.
Prep 30 mins
Cook 3 hrs 50 mins
Total 4 hrs 20 mins
Dessert
American
8 to 10
618 kcal
5 / 2 votes
Print Recipe 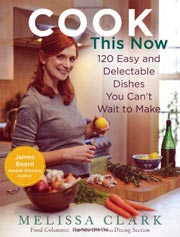 For the pecan pie filling

Melissa Clark is right. Cook this now. This pecan pie isn’t cloyingly sweet like pecan pie can be, but it’s definitely not a demure pie either. Boiled-down maple syrup, star anise (I think you could substitute a few cinnamon sticks if you’re licorice averse), and dark rum combine for a complexity that plain old corn syrup could never match.

I did run into one small hiccup. The maple syrup hardened into what looked like a huge praline while I steeped the star anise. It was easy enough to reheat before whisking into the eggs.

With Thanksgiving coming up, I thought I would give this pecan pie-with-a-twist a try. From the first simmering of the star anise in the maple syrup, I knew it would be a winner. The maple syrup and licorice flavoring were a delicious combination.

My tasters felt that the filling had a more subtle, not an in-your-face sweetness, contrary to Clark’s description that it would be “toothachingly sweet.” The recipe was so easy to make. Overall, the subtle taste of the syrup and star anise with the pecans was delicious, and I would make this again.