This easy french fries recipe from Joel Robuchon is made with potatoes, salt, and oil and uses a surprising technique: frying at a low temperature for up to an hour.

This easy french fries recipe flagrantly flies in the face of much of what we thought we knew regarding the perfect technique for frying french fries, yet it works dangerously well. Like, let’s-cancel-our-plans-for-the-rest-of-the-day-and-fry-another-batch well. It’s a “cold fat” method popularized by Joël Robuchon, and by “cold fat,” we mean immersing potatoes in oil and then gradually heating the oil to the frying temperature, which effectively avoids oil splattering.

According to author Timothy Ferriss, this method also uses less fat than usual, which obviously is a boon. And, seeing as the lower temps “don’t damage fatty-acid chains as higher temps do,” says Ferriss, you can reuse the oil to fry that second (and third) batch. The only downside? This technique takes far longer to fry your fries. But after tasting these, we gotta say, patience has never before seemed such a virtue.–Renee Schettler Rossi 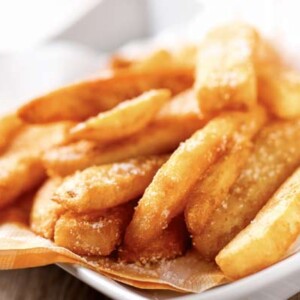 This easy french fries recipe from Joel Robuchon is made with potatoes, salt, and oil and uses a surprising technique: frying at a low temperature for up to an hour.
Timothy Ferriss
Prep 15 mins
Cook 1 hr 45 mins
Total 2 hrs
Sides
French
3 to 4 servings
5 from 1 vote
Print Recipe 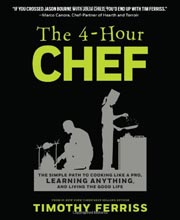 Quicker Fried Fries Here we’ll be using the more traditional approach of frying the potatoes twice, first at a lower temperature to cook the inside, then at a higher temperature to create a crisp, golden exterior. 1. Follow the above recipe through the middle of step 2. In a deep fryer, Dutch oven, or deep, wide pot, bring the fat or oil to 320°F (160°C) using a deep-fry or candy thermometer. Carefully add the potatoes and stir gently to separate them. (If you’re using bear fat, don’t worry: The resulting fries will taste much better than the warm bear fat smells.) If you’re using a stovetop rather than a deep-fryer, you will very likely overshoot the desired temperature, which can be tricky to fine-tune when it comes to hot fat or oil. Keep checking the temperature. Also, things can get splatterific if you haven’t dried the food properly. If this happens, minimize fat or oil shrapnel by flipping a colander upside down over the pot as a makeshift splatter guard. The potatoes are ready when they’re half-cooked, still pale, and a little floppy, 7 to 10 minutes. Using a slotted spoon or tongs, spread the fries on the paper bag or towels to drain. 2. Next, heat the fat or oil to 360°F (182°C). Working in small batches, return the fries to the fat or oil and cook until golden brown, 3 to 4 minutes. Dump on the paper bag or towels. Season with salt while still hot and let cool to an edible temperature. Slather the fries all over your hands and face. Baked Fries If frying just ain’t your thang, baked fries are your friend. Try this approach. It also works with sweet potatoes. 1. Preheat the oven to 400°F (200°C). 2. Cut the potatoes into thin wedges. Toss the slices with olive oil and spread  in a single layer on a baking sheet. For even more flavor, create a mixture of 2 to 3 tablespoons olive oil, 2 teaspoons ground cumin (this is the key), 2 teaspoons cayenne pepper, and 1 teaspoon cinnamon (just remember the “3 c’s”). Douse each wedge with the mixture before placing it on the baking sheet, or—my preference—put them on the baking sheet and paint this mixture on all of them. Thirty minutes in the oven and they’re done. Season with salt while still hot and serve immediately. Fries Made With A Fancier Fat Author Timothy Ferriss, in his rendition of Chef Robuchon’s fries, waxes poetic about using bear fat for frying. Yes, bear fat. He explains that it’s horrible to the nose but tastes absolutely amazing with certain foods. Such as fries. Bear fat fiends, you know who you are. Everyone else, try rendered duck fat or beef tallow for equally memorable fries.

These easy fries are now renamed at our house as Heavenly Duck Fat Fries! My husband thinks he’s “died and gone to heaven” anytime I say I’m getting my rendered duck fat out! Amazing flavor.

The cold fusion method was new to me but turned out to be a way you could set the fries on a back burner and check on them occasionally while preparing dinner. I prepared the potatoes as stated and let them soak for 1 hour on the cabinet. I drained them very well in layers of paper towel and added them to room-temperature duck fat. My medium-low heat didn’t seem hot enough in the beginning, because I didn’t see bubbles after 20 to 25 minutes. I raised the temperature to more of a medium-medium high and then the fries started bubbling more. I continued to cook them at the higher heat for another 40-45 minutes before they started browning.

I was concerned at first that the fries would be soggy, but they weren’t at all. They were crispy and salty and had a “hearty” flavor thanks to the duck fat! I strained the cooled duck fat and stored it back in the freezer for another batch.

I think I could’ve easily had 2 more potatoes in the same pot and not be overcrowded. Next time, I may “gild the lily” and add a little truffle oil on top with truffle salt! Everyone’s ready for the next time. This recipe is definitely work trying!

I was quite intrigued with the cold fusion technique and it did not disappoint. The result is a delicious, crisp fried potato using a process that is so much easier (and neater) than the classic double frying method. As an added benefit, the frying oil (I used canola, not bear fat!) is crystal clear at the end and can simply be stored and held for another time.

The only issue with this method is that you need to plan ahead. You need time for soaking the potatoes and the cooking time is quite lengthy. You need to watch the temperature on your stove. I started to see bubbles after only 5 minutes and turned the heat to slightly less than medium-low. After 40 minutes, the potatoes had some very slight browning around the edges and so I raised the heat to just below medium. In 10 more minutes, I saw that they were a uniform golden brown and a quick taste test confirmed that they were done. I salted them with a lovely fleur de sel that I had purchased in Paris. I am a big fan of this technique!

As soon as I read this recipe, I knew I had to try it. Somewhat half-heartedly, I tried to get bear fat, but to no good. The best next thing, I could think of, was beef fat. For a long time, fries fried in beef fat have been on my to-do list, remembering the great taste of the old McDonald fries. I went to my butcher in faith and got 2 lbs beef suet, rendered it down, and had my beef fat.

I followed the recipe to the letter, frying them 7 minutes the first time at the lower temperature, in batches, than frying in two batches at 360°F. The fries turned out perfect, nicely browned, not greasy at all, crispy on the outside, soft inside. And the flavor, well, almost like I remembered from McDonald’s long ago. And very, very good. This is the way to go, to do homemade fries. At least for me, from now on.

These fries are the best, really. The only negative part about it is the fuss with making your beef fat and the involving smell. Even if you only fry in the fat and don’t have a professional hood, your house smells for a day or so.

What a nice way to fry. No fuss, no mess. I made sweet potato fries using the Joel Robuchon technique.

I made 2 batches; the first I used 1/4-inch sized fries. The sweet potato became tender in about 5 minutes cooking over a medium-low flame. After raising the temperature to medium, the fries browned quickly, in 7 to 8 minutes. My sweet potato fry expert taster (my husband) suggested the fries were delicious but too thin. So I tried again, cutting thicker fries, about 1/2 inch. They tenderized in about 5 minutes on medium-low, then took about 10 minutes to brown and crisp up. The “expert” said they were too thick. Suggestion: Cut potatoes 3/8″ thick!

By the way, my husband was happy to eat both sizes, and they were gone before I knew it!

I made the unfried version of these and used olive oil. My only suggestion for this recipe would be to remind home cooks to turn them at least once during the cook time. If they don’t flip them one side is going to be way crunchier. Great recipe.

I used the cold fusion variation to make my sweet potato fries, and even though they took almost 1 1/2 hours to make, they were golden brown and crispy on the outside while still being soft and chewy on the inside.

It took 45 minutes for the potatoes to cook through enough to be soft. Once they were soft, I increased the heat to medium and allowed them to cook until done, which took an additional 30 minutes. With the increased heat the oil does bubble more to the point of a low boil. The fries slowly change to a golden brown as they cook.