This recipe for manchup was based on a reader’s search for this seemingly elusive dish. With a little luck and even more outside-the-box thinking, Gary Allen found it.

LC reader Mary Cannon wrote in, asking if we had a recipe for manchup. A quick search of the Web told me that manchup is a dish from the Cape Verde Islands, but nothing more. Additional searches found very few recipes from Cape Verde, and none of them for manchup. Suspecting that the dish’s name might have variant spellings, I tried looking for anything that sounded reasonably close to manchup, on the Internet and in books on West African cuisine (since I couldn’t find any Cape Verdean cookbooks).

Human nature being what it is, food writers can usually count on the nostalgia that people feel for the cooking of their homeland. A query was posted to a bulletin board for Cape Verdean émigrés. Four people read it, but none answered. There was still one avenue of hope: Cape Verde’s embassy in Washington, DC. An appropriately desperate e-mail was sent, explaining the problem.

An hour later, Jose Brito, the Republic of Cape Verde’s ambassador to the United States, wrote back. According to Brito, “Cachoupa [is] translated here in the US [as] manchup.” This was a significant clue. Going back to the Cape Verdean recipe sites, finding an answer became a relatively simple matter — although cachoupa’s name does indeed have a variant spelling: cachupa. But where did the name manchup come from? It’s apparently a corruption of munchupa, a name for cachupa that is used on Brava Island, at the southwestern end of the Cape Verde archipelago.

Cape Verdeans created one of the first fusion cuisines, incorporating the tastes and ingredients of Europe (livestock), Africa and Asia (sugar and tropical fruits), and the Americas (beans, chiles, corn, pumpkins, and manioc). They were able to do so because of their location: Just off the west coast of Africa, they were ideally suited as a stopping point, first for Portuguese explorers, and later for slave traders.

Cachupa can be very simple — barely more than samp (hominy), beans, and some salt pork, much like old-fashioned succotash. This simple peasant fare is known as cachupa povera. Wealthier Cape Verdeans — or even the poor, on special occasions, such as weddings — add more ingredients, such as a little meat or fish, in which case the dish is known as cachupa sabe, a more savory dish, like Brunswick stew. At the other end of the spectrum you’ll find cachupa rica — the richest variation. Like feijoada completa, it’s a long way from the simple peasant dish of legumes and grain. Here is a recipe for cachupa rica.

Note: This recipe doesn’t indicate the number of portions or portion size; it has been edited, but not tested. 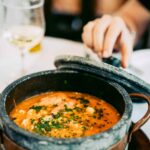 Cachupa is the national dish of Cape Verde. Like other great rustic dishes, such as the cassoulet of France and feijoada of Brazil, it uses highly seasoned meats in relatively small amounts together with grains and beans, and is slowly cooked to build a great depth of flavor. And like those dishes, it is even better when reheated the next day.
Prep 40 mins
Cook 2 hrs 20 mins
Total 3 hrs
Mains
Mediterranean
20 servings
516 kcal
5 / 6 votes
Print Recipe