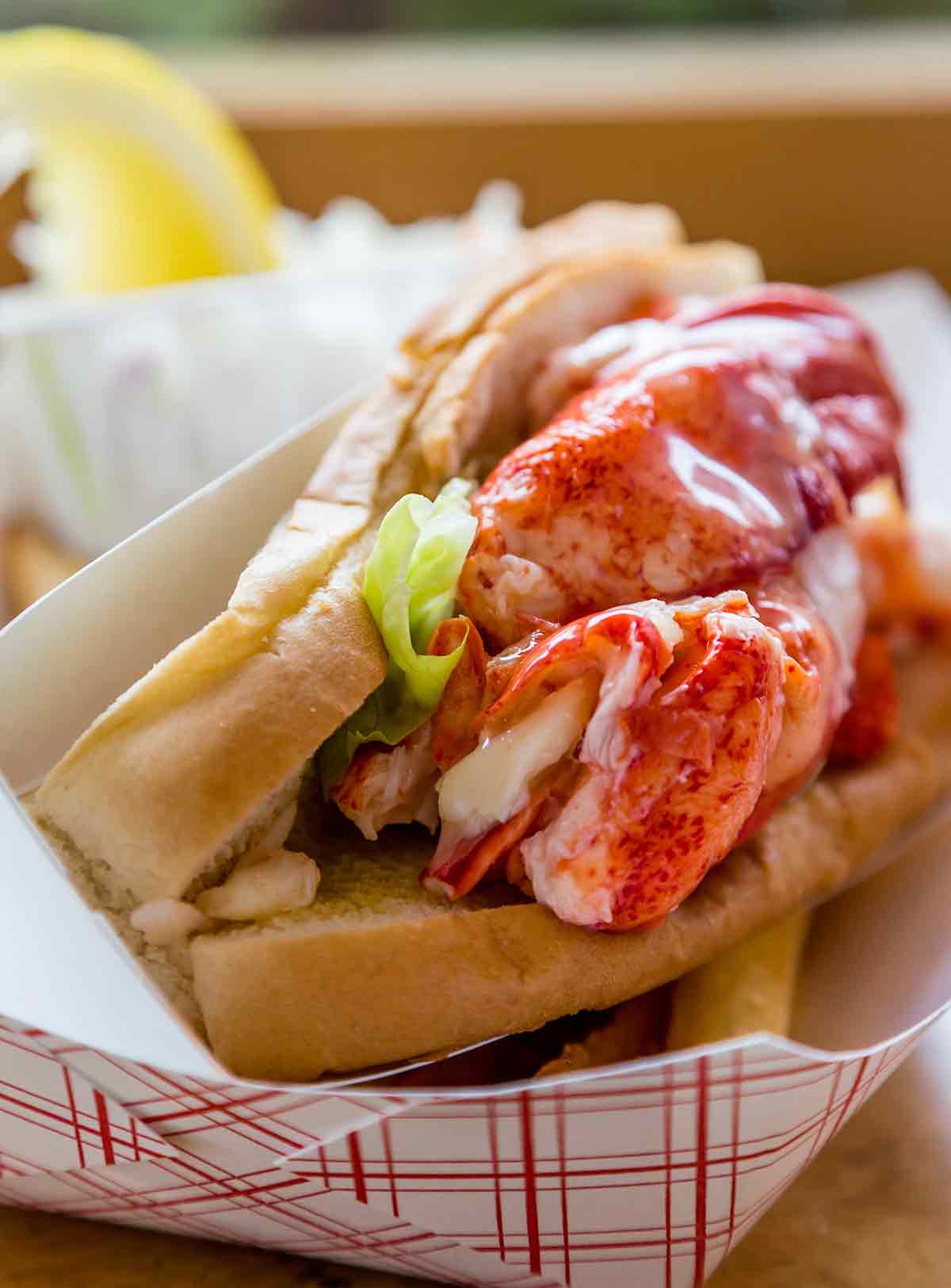 There are few immutable truths in life: 1. We eventually grow so dotty that during TV commercials we forget what show we’re watching. (Come on, don’t be ashamed: raise your hand if you’re already with me on this.) 2. Kids have this preternatural ability to scream holy hell, which they wield with shock-and-awe precision, at the exact moment I wander into The Gap, making you look like Psycho Mom Serial Killer. And 3. Nothing, but nothing is the rightful and appropriate condiment for lobster rolls except mayonnaise.

I’m not just talking about any mayonnaise, I mean Hellmann’s. I guess you can take the boy out of New England, but you can’t take New England out of the boy. Since I was a kid, summer was all about clam shacks and lobster pounds. I strung together the weeks, filled with teary mornings at day camp (because, yes, I missed my mother—so sue me) and afternoons of cutting the grass and sweeping the basement, knowing that on weekends my reward for generally acting like a Stepford Child was a big-ass container of fried clams or, on special occasions, a cardboard box cradling a mayonnaise-enrobed lobster roll in a top-split toasted bun, a boat of french fries, and a Fanta orange soda.

Since then, I’ve deigned to eat all kinds of lobster rolls made with all kinds of ingredients, as if these interloping cooks thought they were actually making them better. Although I find it an affront to my Northern sensibility, I can handle the additions of minced celery, carrots, or other vegetables to give lobster rolls a crunch factor. And I can tolerate—barely—the folding in of herbs, from tarragon and parsley to chives and savory for greenery. But I draw the line at anything but Hellmann’s dressing my seafaring love bug. Come on, people! I’ve suffered through, and am vehemently, trenchantly opposed to, aïoli mayonnaise, chipotle mayonnaise, lime mayonnaise, and that dreaded of all dreaded dressings: melted butter.

I’ve deigned to eat all kinds of lobster rolls made with all kinds of ingredients, as if these interloping cooks thought they were actually making them better.

Now I love butter-drenched lobsters as much as the next guy. Maybe even more. Just consider the physical evidence of my ever-expanding girth. But the only way I want to treat my lobster to a butter bath is with a cracker in one hand and a pick in the other while wearing a plastic bib with a bright-red ocean cockroach on it that’s saying, “Eat me!” If I want the gustatory equivalent of a butter-drenched lobster roll, I’d eat some bread with my dinner.

Ponder this: If God meant for man to eat lobster rolls with nothing but butter, he wouldn’t have had the forethought to create Richard Hellmann, who in 1905 gave unto the world his wife’s secret recipe for mayonnaise at their Columbus Avenue deli. (It’s what my friend Deborah used to call “the true Jewish Manna.”) Perhaps the single greatest invention since white bread (by the way The One’s mother made him mayo sandwiches, she felt it was that good), mayonnaise is the perfect mate for lobster. It adds luxury to opulence. It coddles the succulent, sweet meat—which takes on a whole different flavor dimension when chilled—and the slight vinegar bite cuts through, making sure it’s not just an indiscriminate orgy in your mouth. Butter, on the other hand, is like a French tart who spritzes on more eau de cologne and goes in for the kill. Or rather, overkill.

As a child, I’d slather butter unsparingly on slice after slice of bread my mom had baked from scratch. It was always while the bread was still warm from the oven. And it was always with a sorta mesmerized stare as the butter slunk into the nooks and crannies and teetered  past the edge of the crust. I’d schmear it on corn on the cob—over and over and over again seeing as the butter insisted on sliding right off. I plunked heaps of it on the boiled new potatoes that my grandma had dug fresh from her garden earlier that day during summer. And I’d lavish it all over the surface of the cheap sirloin steaks my dad would occasionally grill. I was no stranger to butter. And my bulging little belly showed it.

Unlike some lucky kids I know who grew up in New England with lobster shacks around each curve, I grew up on a lobsterless landlocked farm in the midwest. (Actually, it wasn’t exactly landlocked if you count the creek meandering along the northern boundary of our property. Although there were no crustaceans there. I know. I looked.) Lobster in any incarnation wasn’t commonplace in rural Iowa. Although it was on the menu at what passed for a fancy-schmancy  restaurant that was about nine miles down the road, past the endless pastures that smelled of manure and beyond the three stop lights that constituted our nearest town.

A couple times a year, my dad would take us along to a business dinner there. And my mom would unfailingly order the steamed cracked lobster. I’d know early in the day, before she’d even mentioned our reservation, that we were heading to town. Her hair would be in rollers all afternoon. Her dangly earrings set out hours in advance. Her demeanor less fatigued farmwife and more excitedly elegant. And I think it had everything to do with the lobster. Her anticipation was simply too great for something ordinary like cod.

Although my mom has always been and remains a truly altruistic woman, I don’t recall her ever offering me a bite of her steamed catch. Not that I ever thought to ask her. I was too distracted, not just by her altered demeanor but by her dainty silver cup of drawn butter. I’d dip one saltine after another into it as I stared at that creature who was my mom and yet not my mom.

It wasn’t until I was a teenager that I encountered the concept of lobster on a roll. I’d been flipping through my dad’s collection of Gourmet magazines when the tussle between butter and mayonnaise described in the article stopped me in my tracks. Mayo? I’d long ago come to regard the buttery gilding of lobster with an almost hushed reverence. That people could consider lobster in the same casual manner as they did tinned tuna stunned me.

The notion of entrusting something as sacrosanct as lobster to something as overwhelmingly artificial as Hellmann’s actually caused me some angst. Still does. I can count on one hand the times I’ve eaten a lobster roll. I’ll let you guess as to how I insisted the condiment of choice played out.

Years later, when I snuck off at the last moment to Jamaica to elope, I knew only four days in advance the casual slip dress that I would wear. Yet I’d known for weeks what I’d order for dinner that evening. And it made me unspeakably happy. I know what you’re thinking. It wasn’t the lobster. It was the ceremony. The bubbles. The salty air. The Jamaican mojo. But you’re wrong. It was the lobster. Grilled and naked save for a simple brush with, well, not mayo.

Whom do you play for, les petits rock lobsters? Team Mayo or Team Butter?

Tell us below in the comments below!

Photo © 2020 dbvirago. All rights reserved. All materials used with permission.