This pressure cooker pork and pinto bean chili, which can also be made in an Instant Pot, is filled with smoky, fall-apart pork shoulder, creamy pinto beans, and slightly spicy poblano chile peppers. Pretty magnificent with cornbread though not shabby on its own.

Ladies and gentlemen, this is why we have pressure cookers. Because they render an inexpensive cut of pork and plain old pinto beans into a smoky, soulful, put-your-spoon-down-and-sigh bowl of chili in a fraction of the time it would otherwise take.–Jenny Howard 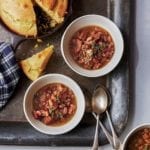 This pressure cooker pork and pinto bean chili, which can also be made in an Instant Pot, is filled with smoky, fall-apart pork shoulder, creamy pinto beans, and slightly spicy poblano chile peppers. Pretty magnificent with cornbread though not shabby on its own.
Prep 45 mins
Cook 1 hr
Total 1 hr 45 mins
Mains
Southwestern
6 to 8 bowls
507 kcal
4.67 / 3 votes
Print Recipe 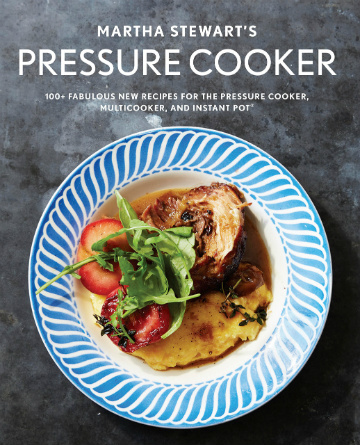 This delicious pressure cooker pork and pinto bean chili comes together quickly and has great flavor. The smoky poblanos, cumin, and oregano combine to really amp up the simple broth. We enjoyed this the day that I made it as well as a few days later. Each time it has been very good.

I would make this again and would consider doubling the amount of pork next time.

Chili that can be an afternoon project rather than a weekend effort is always a useful recipe in our kitchen. This pressure cooker pork and pinto bean chili didn’t even require soaking the beans the night before so it was extra time-friendly.

We have a conventional pressure cooker, and I did plan ahead a bit to make stock the night before, then the prep could start late in the afternoon and still be done for dinner. Roasting the peppers is easy either under the broiler or on your grill if you’re already using it. I take a little slower approach than the recipe because I like to lower the rack a little to keep the broiler from setting off my smoke detector so I put the rack about 5 inches below the broiler element and carefully watched the peppers, turning them to get all sides blistered. This technique and the brief steaming make them a cinch to peel, but I would also suggest wearing gloves as even poblano peppers can irritate your skin.

Overall, the prep for this recipe is easy because the recipe isn’t that complex, but it still gives a satisfying weeknight chile result. I was a little light on the meat, but my 1-pound bag of beans was a little over 2 cups, so it all worked in fine balance. Pork shoulder responds especially well to longer cooking or braising. The browning is a nice way to add a bit of flavor, as well as the cooking of the onions (I might even sauté them a little longer to develop some golden edges next time).

I think that if beans are not done at the indicated time, finishing them with the cover off will both bring them to the perfect point as well as let the broth evaporate a bit and naturally thicken.

The resulting chili is a nicely balanced flavor that is family friendly—not so spicy to scare tender palates. It’s not quite a chile verde, though it heads in that direction, and not really a red or white chili. After tasting it the first night I considered how to make it a bit more to our liking (a bit more forward with the heat and slightly thicker).

My solution was to add a couple of roasted Hatch chiles that I had already prepared, chop then heat them. In a measuring jug, I added the roasted peppers, a bit of broth and some beans (a half ladle full, no meat) and give a brief buzz with an immersion blender to create a roux-like thickening which I stirred back into the pot. You could also smash them by hand with a machadora (wooden bean masher). That simple step fixed the heat level and thickness (both a personal preference)

This pressure cooker pork and pinto bean chili is a delightful change from your regular run-of-the-mill chili. We found it to be flavorful, light, and deeply satisfying. There was no need for the usual cheese or sour cream add-ons. I used store-bought chicken stock and since I have a gas stove I blistered the peppers over the burner’s open flame. Because it puts the peppers closer to the flame, they only took a couple minutes to blister and char.

I wasn’t sure that the beans would be soft and tender after sitting in the pot for 30 minutes after cooking, but surprisingly they were. The chili was still very hot after waiting 30 minutes so there was no need to reheat it. The broth is definitely thinner than the usual tomato-based chili but the flavor more than made up for that. It was delicately spiced, having a little heat but was not too hot. Two tasters suggested maybe the next time we could have some hot sauce on the table for those who prefer more heat.

I plan on making this again in the very near future. My son and his girlfriend enjoyed it so much they took 2 servings home for lunches the next day.

I was surprised at how much everyone around the table liked this pot of chili. This is very different from the chili recipes that I have always made. It had much more broth than I am accustomed to, which actually ended up being fine. (Think something to dip cornbread in.) There were no tomatoes in sight, which did not prove to be a problem. Perhaps the moral to this story is, try a recipe, even if you are not quite sure of its outcome, and then don’t assume anything until you’ve tasted it.

I was impressed at just how perfectly, (a word that I hesitate to use, but in this case, I can’t think of a more accurate word) the beans turned out. They were plump and tender with absolutely no splits. The pork was extremely tender.

I made this chili in my Instant Pot. This is another example of just how miraculous that appliance can be. All of the prep work, the chopping and the sautéing, you need to do no matter how you will be cooking the chili. So what you are left with is the cooking. Well, in my IP, the chili was done in 31 minutes. That’s 31 minutes for beans and pork butt to become tender. If you haven’t seen it for yourself, it sounds pretty unlikely, but that is exactly what happened. Makes you wonder why you don’t cook in that thing more often.

I had bowls of chopped sweet white onion, sliced pickled jalepeños, sliced avocado, and shredded Cheddar cheese on hand. I also had a cast iron pan of fabulous cornbread with butter to slather over the top. Our guest thought that the cornbread was perfect dipped into her bowl of chili. It turned out to be a fabulous meal. You know that you had a real winner, when you friend calls the next day and says, “Thanks for inviting me! And ‘YUM’!”